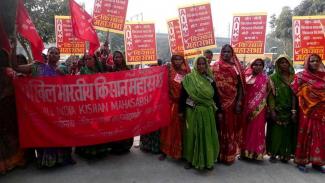 (A Factsheet on Women Farmers in the Agriculture Sector, prepared for Nation For Farmers by Mahila Kisan Adhikaar Manch, MAKAAM)

Women constitute a substantial part of the workforce in India’s farming sector, yet they are neither identified, recognised nor supported as farmers. As more and more men have shifted to non-farm work in the industrial and service sectors over time, women have substantially remained in agriculture.

Women’s domestic work burden, lower mobility, lesser education, and fewer rights and control over assets such as land, livestock etc. has limited their entry into non- agricultural sectors, as well as their range of non-farm options. Even with the increasing feminisation of agriculture and the agricultural workforce, this has not translated into recognition of women as farmers despite their critical role in agriculture and allied sectors. This has effectively ensured that women have largely remained invisible as farmers to the government in terms of agricultural policies, schemes, programmes and budgets. They are also deprived of formal support systems such as regards credit, extension, insurance and marketing services.

The deepening agrarian crisis is in many ways a reflection of the crisis of countless women farmers rendered invisible by the state and society, but whose relentless, untiring labour upholds the rural economy.The predicament of women farmers behooves us to demand for a special joint session of the Parliament to be devoted entirely to discussing the situation of women farmers across India as well as formulation of a clear roadmap ahead towards their recognition, rights and entitlements as farmers.

Overwhelming Presence of Women in Agriculture: Evidence from nationally representative surveys such as the 15th Indian Census (2011) shows that around 65.1% of female workers depend on agriculture, either as cultivators or agricultural labourers as opposed to 49.8% of male workers (Census, 2011). Reports from the National Sample Survey Office also indicate that 63% of all female “workers”, and 75% of rural female workers are in agriculture (NSSO 68th Round 2011-12). According to an International Labour Organisation (ILO) study, over 81% of women in farming are from Dalit and Adivasi sections (ILO, 2010).

Land Ownership: Women’s access to land is mediated by a complex web of social, legal, customary norms and patriarchal practices in various parts of India. Despite their significant presence in agriculture, figures from various data sources reveal that women’s ownership of land in rural households ranges between 6-11% (IHDS 2011-12). Figures from the latest Agricultural Census of 2015-2016 indicate that women operated land holdings in India account for 13.87% of all holdings.

This comprises about 11.57% of the total operated area. Women’s poor asset ownership has important implications for access to agricultural inputs like seeds, credit, extension, technologies, insurance etc as well as on their opportunities for human development & freedom from violence.

Women’s work and contribution in the agriculture and allied sectors are often underreported and inadequately reflected in macro level data systems. Several micro-level studies point to the fact that women’s participation in agriculture in India is anywhere between 60-75 per cent in most of the farm related activities. More women-days go into farming than men-days in a variety of agricultural operations, which are divided and performed based on gender.

Lack of Tools to Reduce Women’s Drudgery & Workload: Most of the work done by women farmers such as sowing, weeding, harvesting, post harvesting processing of crops are repetitive in nature, involving a lot of their time, physical labor and drudgery. This is in addition to their gender based household works such as cleaning, cooking, fetching water, etc. But there is very little research or development of gender friendly tools and technologies to ease women’s workload and drudgery in farming as well as enabling women’s access to affordable and usable tools/devices.

Gender Disparity in Wages: Agriculture sector is characterised by decelerating and differential wages on the basis of gender. Even while over 60% of all agricultural operations are handled exclusively by women, female hourly wage rates in agriculture vary from 50 to 75 per cent of male rates, and are too low to overcome absolute poverty.

Unequal Access to Credit: Women farmers are often denied equal access to credit because the land is not in their name. Agricultural labour productivity is, on average, 44 per cent lower on female-headed plots than on those managed by male heads. 34 per cent of this gap is explained by differences in labour market access and 29 per cent by differences in credit access (Lopez, A, 2015).

Access to Extension Services: Men’s and women’s access to extension services shows relatively low levels of contact between farmers and extension agents, with disproportionally lower levels of access for women with 18% for women as compared to 28% men (World Bank, 2010).

Inadequate Budgetary Allocations: Women’s growing presence and contribution in the agriculture sector has not been matched with any substantial increase in budgetary allocations over the years. The budgetary allocations reported as part of the Gender Budget Statement (GBS) of the Ministry of Agriculture & Farmers Welfare for the financial year 2017-18 shows that out of the total budget of Rs.51026 crores, Gender Budget allocation for various schemes together works out to just 8.6% of the total budget, i.e. just Rs. 4388 crores.

Poor Representation in Agriculture & Allied Sector Schemes: Out of 55 odd schemes under the Department of Agriculture (DAC), only about 14 have earmarked allocations for women. Even here, the allocations for women farmers in some of the beneficiary oriented schemes have been pegged at a standard 30 per cent, without any specific rationale or basis to substantiate the same. Given that land ownership is a major criterion for eligibility, women farmers stand excluded from most of the schemes.

Women Take on the Burden in Farm Suicide Affected Households: With increasing incidence of suicides, largely by men in farming households (roughly three lakh suicides between 1995-2015), women are taking on the entire responsibility of farming, along with taking care of children and repaying debts left behind by the men. 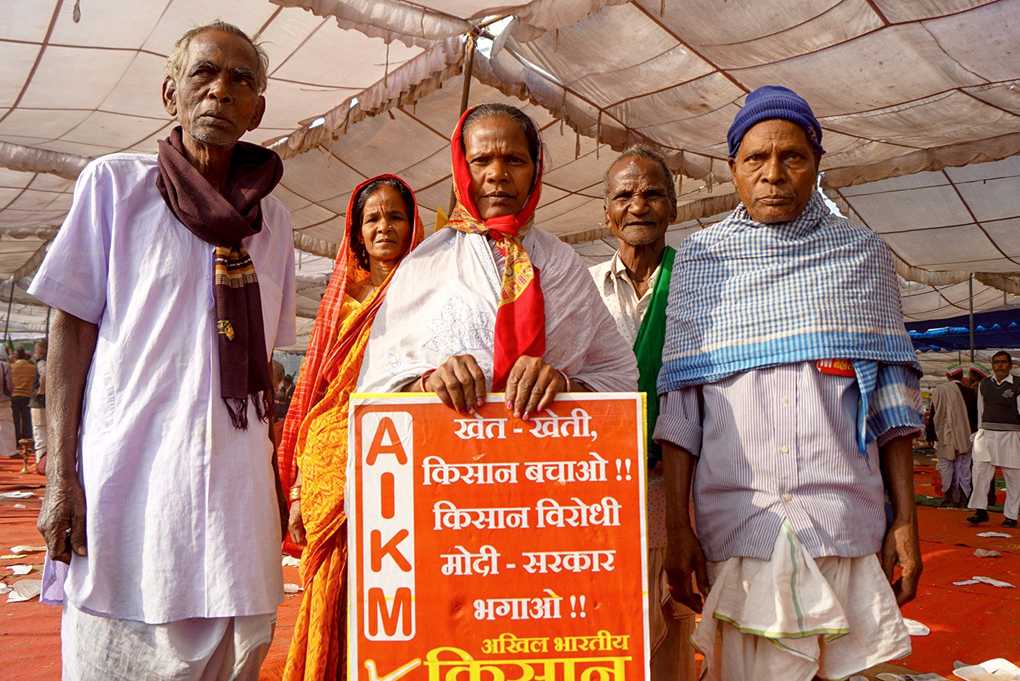 Manju Behera (at the centre in the photo) of Singhaberahampur Purbabad village in Delanga block of Puri district said, we don’t own any land, we earn our liveli-hood by working in the fields of other farmers. She earns Rs. 200 as daily wag-es whenever work is available in the village. Associated with the All India Kisan Mahasabha and All India Agricultural and Rural Labour Association, Manju, around 45, had come to Delhi with a few others from her village, all of them landless labourers from Dalit communities.