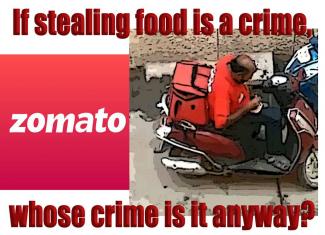 The system of incentives and the absence of a fixed salary creates a paradox for drivers as they often do not find time to stop and eat their meals for the day.

THOUGH little is known about the lives of these drivers who deliver food to people in many cities and towns of India, a negative light was shone on the workers this week after a video showing a Zomato delivery person eating from food packets went viral. The delivery agent, who was in Madurai, was fired after the incident.

Yet, when TNM asked delivery persons about their work conditions, many said they had chosen a gruelling schedule that incentivises fewer breaks for those who want to increase their earnings.

On the ground it is evident that the system of incentives and the absence of a fixed salary creates a paradox for drivers as they often do not find time to stop and eat their meals for the day.

"I want to do more trips because that gives me money but the problem is that most times, I don't get time to stop and eat my meals. I often end up eating food from the hotel I am getting the client's food from," Zubaid says.

Zubaid then points to his legs and says, “I have had four accidents in two years, three were serious. This leg was seriously injured."
The situation is similar for drivers working with other food ordering and delivery start-ups like Uber Eats, Zomato and Foodpanda.

Mani is a driver entrepreneur with Zomato, and like Shekhar, has slowly begun increasing the number of hours he works on delivering orders for Zomato. "There is no other option to earn more money," he says.

But he believes there is a long list of problems for the company to address. He points out that the vehicles of the drivers are owned by them and the petrol charges are covered under the money they earn on each order. The company also does not bear responsibility for the repairs of the vehicle.

Although the start-ups remain embroiled in a competition to take a lion's share of the market, the calls for them to do more for their drivers are slowly growing louder.