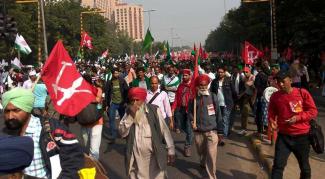 TENS of thousands of farmers from all over the country converged in Delhi on 29 November 2018 to issue a warning to the Modi government that they would not allow real issues like the agrarian crisis and farmers’ distress to be diverted by conspiracies to divide the people by inflaming communal passions. The farmers’ march had one main objective: that a special session of Parliament should be convened just to discuss the agrarian crisis and ways of resolving it. Last year the All India Kisan Coordination Committee (AIKSCC) had drafted 2 Bills at the Farmers’ Parliament (Kisan Sansad) and sent them to Parliament for passing. Loan waivers and MSP were the main issues, and other demands include: stop handing over agriculture to crony capitalists, causing farmers to commit suicide; farmers’ insurance and farmers’ credit card have become a joke and need to be rectified; Swaminathan Commission recommendations must be implemented, including purchase price at 1 ½ times the crop production cost (C2). Also, privatisation of farming must be ended.

The Kisan Mukti March was organised at the call of the All India Kisan Sangharsh Samanvay Samiti (AIKSCC). 210 farmers’ organisations participated in the march, including the All India Kisan Mahasabha, All India Kisan Sabha, and the Swaraj Abhiyan. Farmers from across the country arrived in Delhi and marched to the Ramlila grounds from different railway stations. Thousands of citizens in Delhi came out in support of the march and helped in providing food and accommodation for the farmers. 5 groups of farmers marched to the Ramlila grounds from different directions in Delhi. The farmers were diverse in region and language, but unitd in what they had to say: The Modi government has destroyed the agrarian sector, and the only way to save farmers and agriculture now is to throw out this anti-farmer government. 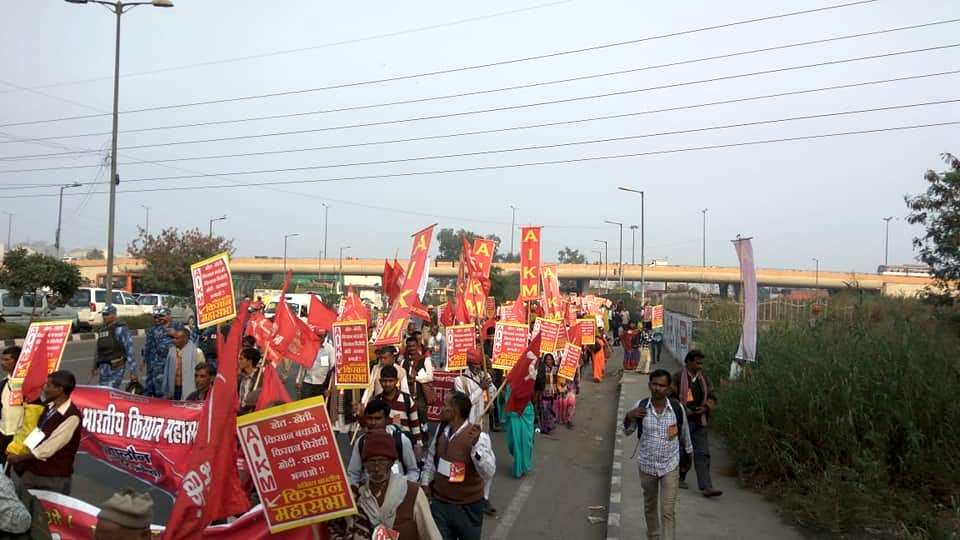 Speaking at the Kisan Mukti March, CPI(ML) General Secretary Dipankar Bhattacharya and other organisational leaders said that during the 2014 election the Modi government had promised compete loan waivers and implementation of the Swaminathan Commission recommendations including 1 ½ times MSP, but they turned out to be empty words and none of the promises have been fulfilled. On the one hand, rich corporate magnates are being facilitated to run away abroad with lakhs of crores of taxpayers’ money, while farmers are being deprived of their rights, forcing them to commit suicide. Demonetisation and GST have destroyed the lives and livelihoods of the poor while the rich capitalists and the BJP have laundered their black money and become richer. Statistics tell us that more than 50,000 farmers have committed suicide during the Modi regime, whereas statistics for the past 2 years have not even been released. Starvation deaths are on the rise, especially in Jharkhand, Chhattisgarh and even in Delhi, and yet the Modi government is bent on ending the Public Distribution System (PDS). Many States including Maharashtra, Bihar, Jharkhand and Uttar Pradesh are struggling with drought conditions, but the government is not lifting a finger to bring relief. Lands of farmers, Adivasis and the poor are being forcibly acquired in the name of Bullet Train, Eastern Front Corridor, Western Front Corridor, GAIL gas pipe line, national highways and industrial corridors, but they are getting neither just compensation nor rehabilitation. Sharecroppers are not being given the ‘farmer’ status, thus depriving them of all benefits. MNREGA is almost at a standstill and instead of giving land to the landless, the poor who have been settled on land for years are being evicted.

The Kisan leaders said that the Modi government as well as BJP State governments have betrayed the farmers with false promises and increased their distress manifold. Farmers will not allow the issue of agrarian crisis and farmers’ distress to be diverted by communal conspiracies to incite hatred and violence and divide the people. The farmers of the country have made up their minds to teach the Modi government a lesson by throwing them out in the 2019 Lok Sabha elections.