Skip to main content
Feature 24 December 2018
All Over The World, Home Is The Most Unsafe For Women 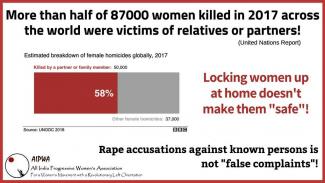 A recent UN study has confirmed what feminists already knew - that the home, far from being a haven of ‘safety’ from an unsafe world, is in reality the most unsafe and dangerous place for women.

In other words, in 2017, 6 women being killed every hour by people they know.

To put this in perspective, the study found that 80% of all murder victims the world over were men - but men were far less likely to be murdered in the home by an intimate partner or family member. But women who were killed, were far more likely to be killed by an intimate partner or a relative. That’s because the institutions of family and household are patriarchal institutions - and patriarchy is dangerous for women. As the UNODC observed, “The fact that women continue to be affected by this type of violence to a greater degree than men is indicative of an imbalance in power relations between women and men inside the domestic sphere.”

The report observed about India: “Available data on dowry-related killings from the National Crime Records Bureau indicate that female dowry deaths account for 40 to 50 per cent of all female homicides recorded annually in India, representing a stable trend over the period 1999 to 2016.”

What are the takeaways from this report for us in India?