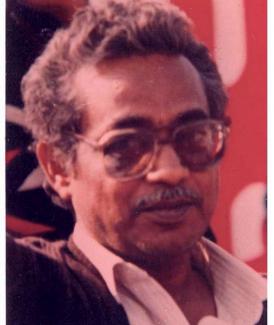 [December 18, 2018 marks twenty years of Comrade Vinod Mishra’s passing. On this twentieth Sankalp Diwas (Pledge-Taking Day), the party is setting up a memorial park (Kranti Park) in Ara to commemorate the legacy of five of the immortal revolutionaries of the CPI(ML) movement in Bhojpur. Statues of Comrade Jauhar, Comrade Ramnaresh Ram, Comrade Jagdish Master, and Comrade Rameshwar Yadav and Comrade Vinod Mishra will be unveiled and dedicated to the public. At the same time, a 3-day meeting of the CPI(ML) Central Committee will be held in Ara from 18-20 December 2018: the first CC meeting to be held in Bhojpur since the Party’s open activities began in 1992. Liberation will carry a detailed feature on the commemorative event in its February 2019 issue. In this issue we mark the occasion by excerpting some selections from the writings of Comrade VM and Comrade Ram Naresh Ram (Paras ji). We are grateful to Comrade Santosh Sahar for selecting these excerpts, which offer an insight into the party’s journey and legacy in the Bhojpur region. Ed/-]

(This conversation with Comrade Ramnaresh Ram was published in the December 2000 issue of the Hindi ‘Lokyudh’. There were some discrepancies in dates, which have since been corrected.)

I cannot remember the exact date, but Comrade Vinod Mishra came to Bhojpur for the first time in the first week of December 1975, two or three weeks after the martyrdom of Comrade Jauhar. We lost the then General Secretary Comrade Jauhar on 29 November in Bhojpur. That was the greatest blow for us at that time, a blow we had to bear barely a year and a half after the re-organisation of the Party. No doubt, the situation was grave and we were definitely bereft, but the Party was fully alert and ready to cope with the situation.

The announcements of Comrade Jauhar’s martyrdom and the appointment of Comrade VM as General Secretary were made together on 25 December, so that not even an ounce of despair could spread among the cadres. As in other parts of the country, Comrade Vinod Mishra was embraced as General Secretary in Bhojpur also with the same faith, belief, and trust with which we had adopted Comrade Jauhar. Actually, he has come here so many times that it is difficult to describe each visit, even that first visit, with great accuracy. It is an unending series of experiences and memories; each so intermixed with the others that it is not easy to sort them out.

Of course, he used to come here for Central Committee meetings. We had especially earmarked one village in Dawath Thana for these meetings. In those days the Party had its activities in all the Blocks of Bhojpur (the Bhojpur, Buxar, Rohtas, and Kaimur Districts of today), less active in some and more in others.

As far as I can remember, Comrade Vinod Mishra had visited almost every point of the struggles scattered over all the Blocks, even in his underground days. Nobody said so openly, but he recognised each activist, just as each of them recognised him. He had spoken to each of them and also to many supporters in the poor Tolis. Of course, when the Party came out, they all spoke openly to him.

As per the CC decision in 1992, each Central Committee member had to be attached to a particular District, and he opted to be attached to Bhojpur District. There was no Party formation in Bhojpur whose meetings he did not attend and where he did not listen very carefully to the discussion and give appropriate directions without hurting the dignity of the CC in any way. All Party activists, members, and supporters in Bhojpur have their memories of him and cherish these memories in their own ways.

Because it’s in Bhojpur that the Party lives

(From a speech by Comrade VM at a public meeting on the party foundation day and Lenin’s north anniversary, 22 April 1993)

There was a time when our Party received such a setback in Bihar, in Andhra, everywhere, that it seemed as if revolutionary struggle in India was finished. There was an atmosphere of hopelessness all around. Many of our own people, from our organisation, were leaving the Party and opposing it. But some stood firm by the Party. That was the time when a flame was ignited in Bhojpur.

A struggle was started here which spread and slowly established our Party in all parts of the country. It was the beginning of a new stream of revolutionary struggle, and you are aware where our Party stands today. This is the reason why our Party was, for a long time, known as the Party from Bhojpur!

This time on the occasion of the 22 April program, I received invitations from many places. But when I heard that there’s also going to be a meeting in Bhojpur, I said that I would go to Bhojpur, as the Party, after all, lives in Bhojpur.

Bhojpur: A Witness to Many Experiments

He and the Central Committee used the experiences and experiments of the entire country to strengthen the Party line, but because Bhojpur was one of the areas of intensive activities, this District has become a witness to many of his experiments and experiences. For example, take the rectification campaign (which began in 1979 and continued through the 80s, and in which the party had sought to reorient the party’s tactics towards an emphasis on mass political campaigns- Ed/-). At the end of this campaign the All India Party Conference was held in two villages of Bhojpur (a Tola in Barnaon and Mujhupur).

Similarly, the process of building the mass fronts of the party also started from this District in a way. The Kisan Sabha, for instance, had its first strong presence in Bhojpur. The Party’s first cultural team ‘Yuva Niti’ was also born here. The demand to nationalise land emerged from the issue of land grabbed by landlords in Bhojpur.

The 3rd Party Congress was held in 1982. Just at that time, Comrade Hari (Girija Ram, also called Rajesh) was arrested on his way to Narayanpur and 7000 farmers protested in Ara to demand his release. A few days later when an activist was arrested at night in Nadhi-Nanaur by the Piro DSP Bholanath Sarkar, the people from three or four neighbouring villages gathered overnight and gheraoed him. The DSP had to apologise to the people and release their arrested comrade without delay. Later when incidences of people’s protests started happening in Patna District also, the Party formulated the plan—‘develop the areas of people’s protest’.

Similarly, it was from here that the Party got its first MP, thus making it the cradle of our Parliamentary experience. Due to the distinctive conditions of class and caste in Bhojpur the call to demolish the feudal dominance arose from here, and VM helped in a big way to place it on the appropriate ideological plank.

Similarly, the feudal army Ranveer Sena came into the peak of its existence in Bhojpur, and it was here that the Party got its first experience of politically fighting such an army.

The public meeting at Ara on 23 April 1993 was the first in Bihar which Comrade VM addressed. Anarchists were unable to dig their feet in here because this area had a strong grasp of ideological issues even though it remained untouched by the earlier Communist movement.

All in all, the relationship of Bhojpur with Comrade Vinod Mishra is a shining example of what the relationship of an intensive work area of the Party should be with its General Secretary, and that is the reason it carries within itself a thousand facets of great potential. A long time period of about 25 years makes it even more widespread. Therefore, it cannot be seen as separate from the Party’s political line, its policies and activities, and the history of the Party. We have learnt from Comrade VM to remain undaunted by any conditions and to obey the Party’s directives without hesitation. And we shall always continue to do so.

(From Comrade VM’s Introduction to The Flaming Fields of Bihar)

All the precious blood of our heroic martyrs spilled over the fields and factories, hamlets and lanes, torture chambers and prison cells all over the country rose high in the sky and there appeared a red glow over Bhojpur. And as subsequent years have proved, the glow was not that of a meteor, but of a star, a red star that has come here to stay and shine.

It’s on that foundation that we have built this building

18 years ago we laid the foundations of a war in the plains of Bhojpur in Bihar. This was a new kind of a war; the struggle of the poorest of rural poor, the struggle of the poor and the landless farmers. The rural poor threw a direct challenge in the face of feudal power. Dalits and oppressed people challenged the mighty Brahminical structure which was thousands of years old. Armed peasant warriors showed the courage to clash with the cruel repressive State machinery. During the last 18 years we have built this building on that foundation laid 18 years ago.

This is the smoke I looked for
This is the fire I looked for
This aroma I needed,
The aroma of gunpowder!
Let me stuff my nostrils with it,
With the aroma of gunpowder.
The Bhojpuri soil is fragrant,
This wonderful fragrance!
Swirls in the environment,
At every step on this soil,
The smell of fire of liberation swirls too,
Wait, wait, let me stuff my nostrils with it,
Let me realise myself.
Munna, do stop me,
Stop me from going to Patna-Delhi,
Let me write the revolutionary temper embodied,
By the sons of this soil
Let me relish the taste of police oppression,
Munna, let me come closer,
Let me stay away from Patna-Delhi.
Here is the graveyard of non-violence,
Graveyard of the parliament here is,
This is the place where Bhagat Singh stands reincarnated.
Even Azad Chandrashekhar is reborn here,
Baikunth Shukla is here only, somewhere,
Somewhere here is Bagha Jatin too.
Here is the graveyard of non-violence.
Smelt each and every head,
Touched each and every heart,
The same fire simmers there,
The same energy exists.
This soil is miraculous,
Place this soil on your forehead as tilak,
Sing the praise of this soil,
Salute it, consider it to be the nectar,
O you fool! sing the praise of this soil,
For this would redeem you, And your voice too.
This soil would grant this people's poet his life too,
This is the miraculous soil.
Come O! You, you come on,
You too, you too come, And you, the people's poet—
Do not flee,
For you are bound with a vow to this soil,
To this soil, to this soil, this soil.