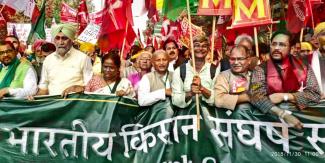 TWENTY six years have elapsed since modern India’s most shocking incident of televised mob vandalism. If the Ram Janambhooomi campaign provided the first example of the Sangh-BJP game plan of grand communal mobilisation, the demolition of the Babri Masjid gave us a clear glimpse of how the BJP could shelve the constitution and subvert the rule of law to serve its fascist agenda. Since that fateful afternoon of December 6 1992 we have had numerous examples of the fascist subversion of the state even though the specific slogan of ‘mandir wahin banayenge’ is yet to be realised in full. As the crucial 2019 battle draws closer, the Sangh-BJP dispensation is once again banking on Ayodhya to bail out the thoroughly discredited Modi regime.

The stage was set by RSS chief Mohan Bhagwat asking the Modi government to enact an enabling legislation to construct a temple in place of the demolished mosque. The courts of law are yet to pronounce their final verdicts on Ayodhya. The criminal case concerning the demolition is still on as is the title suit about the ‘disputed land’. But the Sangh brigade has decided to press for a legislative route so as to sharpen communal and political polarisation on the issue and hollow out whatever semblance of secularism still survives in our polity. The Shiv Sena too chose to throw its weight behind this renewed Ayodhya campaign in a competitive show of strength. Elections to the five states of Mizoram, Madhya Pradesh, Chhattisgarh, Rajasthan and Telangana also provided a platform to the BJP to heighten its communal propaganda spearheaded by the vitriolic UP CM.

But for once the competitive yet concerted Ayodhya expedition undertaken by diverse forces of the expanded Hindutva camp turned out to be a damp squib. In fact, the displeasure of the local people of Ayodhya was quite palpable. The workers of UP who have had terrible experiences in recent times in Maharashtra and Gujarat were certainly not amused to see their oppressors from these states rush to UP to try and foment trouble. All the name changes effected by the UP government failed to generate any excitement, and the Sangh brigade had to beat a retreat with the BJP being forced to declare that it would wait for the verdict of the Supreme Court.

In sharp contrast to the lack of response evoked by the Sangh brigade’s Ayodhya campaign, the ‘Dilli Chalo’ call issued by the All India Kisan Sangharsh Coordination Committee – the umbrella platform comprising more than two hundred peasant organisations working in different states – attracted the attention of the entire country. Almost the entire range of non-BJP opposition parties felt compelled to come out in support of the protesting farmers who marched to Delhi from across the country on 29-30 November demanding a special session of Parliament and adopted a manifesto addressing the urgent demands of India’s crisis-ridden peasants and rural workers. Nothing could be more reassuring at this hour of crisis of Indian democracy than this strong message of communal harmony and class unity among India’s agrarian population. Let us reinforce this growing unity and get ready to give a fitting rebuff to the fascist forces in the crucial electoral battle of 2019.