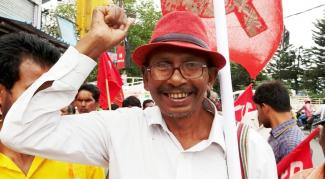 Comrade Lalu Oraon passed away in the early morning of 17 December 2019. Comrade Lalu lived in the Chapatti crossing at Sachindra Chandra Tea Garden. A former Darjeeling District Committee member of the CPIML, he was one of the organizers of the tea garden workers’ union, the Tarai Sangrami Cha Sharmik Union. As AICCTU’s fighter leader in the Tarai region in the tea workers movement in Darjeeling district, the contribution of Comrade Lalu to the establishment of the newly formed Tea Workers' Union cannot be forgotten. The garden authorities always feared the workers’ protests led by Comrade Lalu, whose popularity among the adivasi tea workers was immense. Comrade Lalu participated in the last Party Congress of CPIML at Mansa. The depot line, Chapati crossing, Faujijot, Bhatajot, Lakshman Singhjot, Ambari of the tea garden at Kharibri block were all areas where Lalu organised workers and led memorable struggles.

On January 5, at three o'clock in the afternoon, CPIML’s Dumdum branch member Comrade Nirmal Mukherjee (Panchu), breathed his last at his own home on Dumdum Durgabari Road of the North 24 Parganas district. He was 68. He had been suffering from shortness of breath for several days.

Comrade Nirmal Mukherjee, who was inspired by the Naxalbari peasant movement, worked as an all-time activist and was involved in the activities of the South 24 Parganas district while our party was underground. He was associated with the state office team for several days after the party started mass, over-ground work. Party members Dilip Dutt from Barasat, Pavan, Sagnik Chakraborty from Belgroria, Surjit Dutt from Dumdum participated in his funeral procession, along with his two daughters and other relatives.