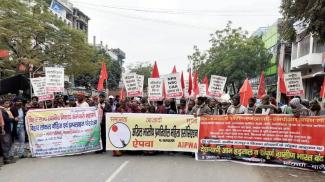 THE countrywide Bharat Bandh on 8 January 2020 called by central trade unions, agrarian workers and farmers’ organizations, was a resounding success in all parts of Bihar including capital Patna. CPIML and other Left parties came out on the streets in support of the strike and expressed their solidarity with the working class. A massive rally was organized from Gandhi Maidan in Patna which culminated in a meeting at Dakbangla Chowk. The Revolutionary Youth Association marched on the streets and demanded a National Register for the Unemployed and scrapping of CAA.

AISA and other student organizations had announced a students’ strike in Patna which was which got a huge response despite brutal repression by the administration. Two student activists at the College of Commerce were arrested and false cases slapped on them, but they were later released due to the pressure of the general strike put on the administration. The RPF arrested and slapped false cases on AISA State President Mukhtar and AISF State Secretary Sushil Kumar, whereas this area does not come under the Railways in any way. The police also brutally lathi charged the students seriously injuring AISA leader Akash Kashyap. CPIML State Secretary Kunal condemned this saying that this is a peaceful people’s protest and cannot be crushed through repression and brutality. In Kaimur District also, BJP supporters tried unsuccessfully to disturb the rally held in support of the countrywide strike. 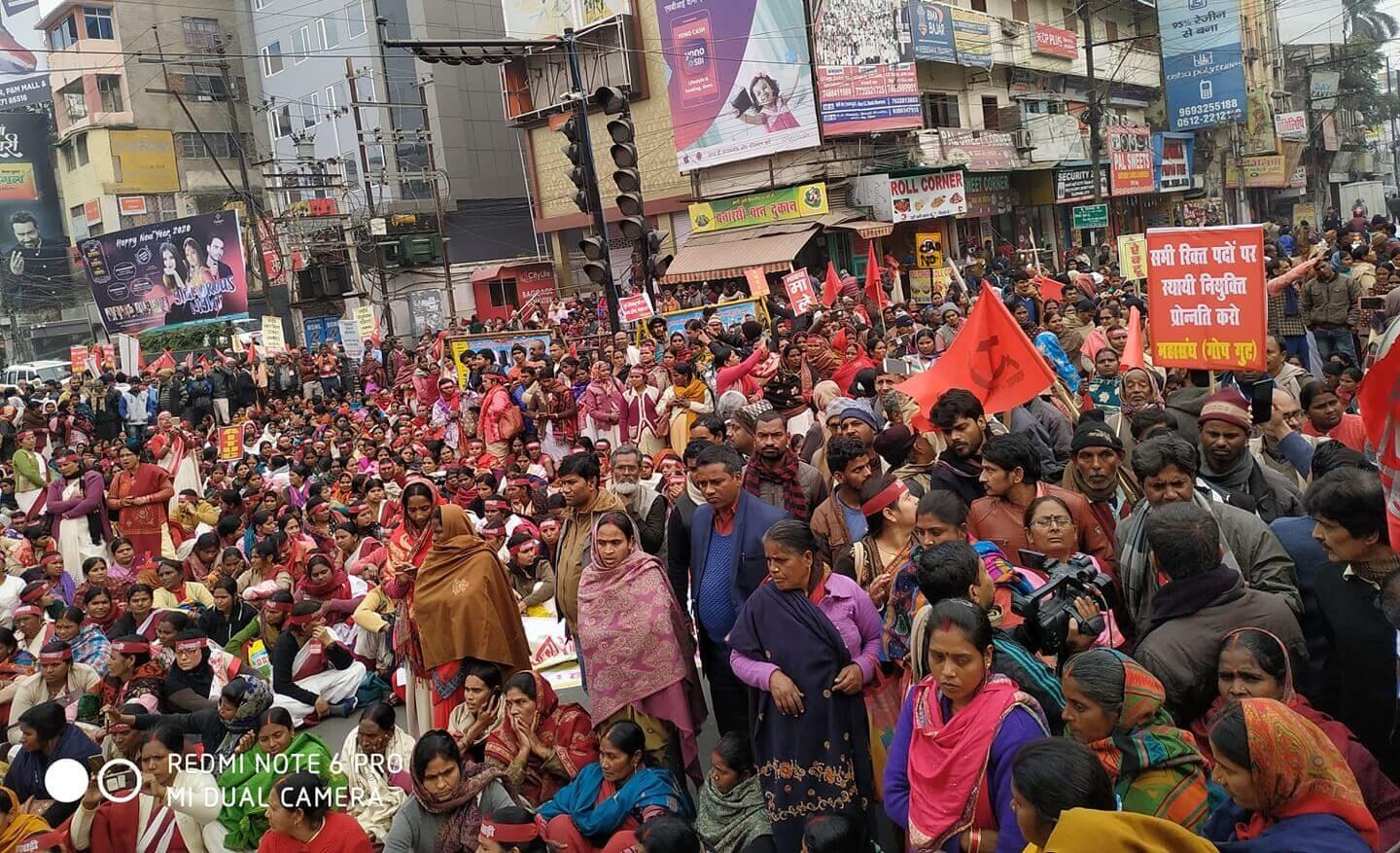 The meeting at Dakbangla Chowk in Patna was presided over by CIYU leader Ganesh Shankar Singh. The meeting was addressed by Dhirendra Jha, Shashi Yadav, Saroj Chaube, Ranvijay Kumar and leaders from other organizations including the State Secretaries of CPI and CPM. Dhirendra Jha said that this fight is People vs. BJP, Constitution vs. Manusmriti; it is a fight against fascism and anti-worker, anti-farmer policies. Instead of addressing the dismal economic recession, this government is attacking the rights of workers through amendments in the Labor Laws. Kisan Sabha leader Shivsagar Sharma said that Home Minister Amit Shah must resign after the attacks on JNU which were obviously at his behest. ASHA leader Shashi Yadav and Rasoiya leader Saroj Chaube pointed out the betrayal of scheme workers by the Central and State governments; they said that not paying minimum wages to ASHAs and Rasoiyas is illegal and a violation of labor laws. Earlier, the Rasoiya Sangh and All India Scheme Workers Federation had organized a rally from Buddha Smriti Park which was attended in large numbers by scheme workers. Workers in many companies joined the strike led by AICCTU leader Ranvijay Kumar. The strike was effective in bank, insurance and other sectors also. 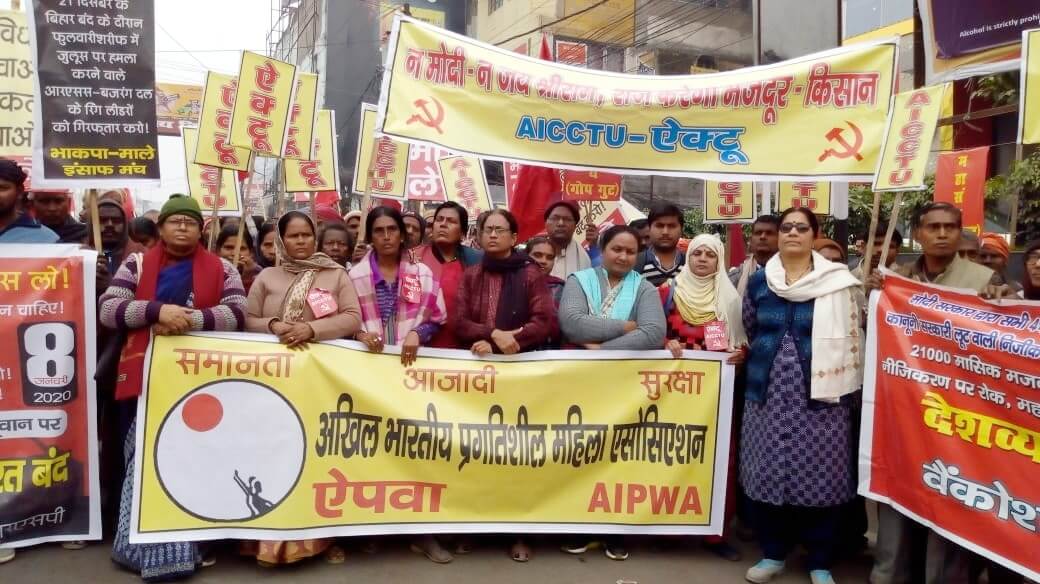 At Jehanabad CPIML activists held a march from Jehanabad Station to Kargil Chowk. Marches were organized at Block HQs and Chatti Bazaars in Gaya District. Farmers joined the Bandh in Patna Rural under the banner of All India Kisan Mahasabha. CPIML activists also came out on the streets in support of the countrywide strike at Gaya, Ara, Arwal, Siwan, Darbhanga, Muzaffarpur, Purnea, Nalanda, Nawada, Gopalganj, Katihar and many other places. 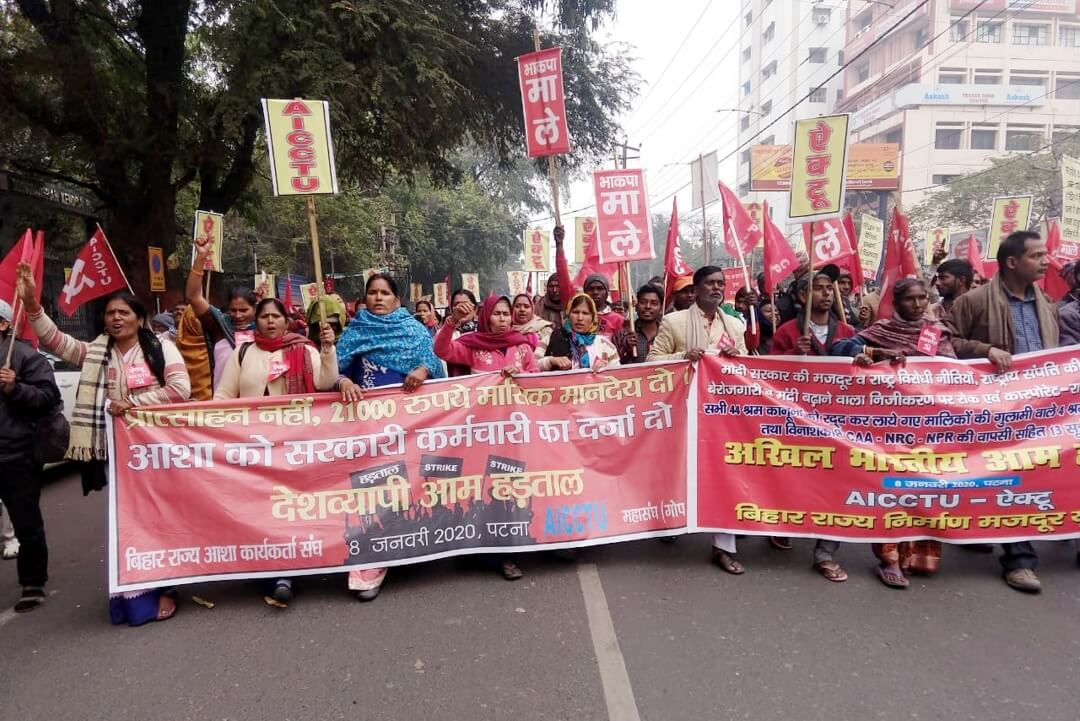 Protest marches were organized at 8 Block HQs in Patna District, responding to the call by All India Kisan Sangharsh Samanvay Samiti and raising slogans of ‘Save Fields, Save Farmers; Save Villages, Save the Country’ and ‘Down with Corporate Loot Raj’. Thousands of workers and farmers put aside their work and came out on the streets for the success of the bandh. Farmers at Naubatpur, Bihar demanded a Land Conservation Act to be enacted in Parliament; loan waiver and 1 ½ times purchase price for farmers’ crops; Rs 5000 monthly pension for farmers and sharecroppers above the age of 60; immediate withdrawal of anti-people, anti-Constitution CAA-NRC-NPR; construction of Kadvan Dam and modernization of Sone Canal. 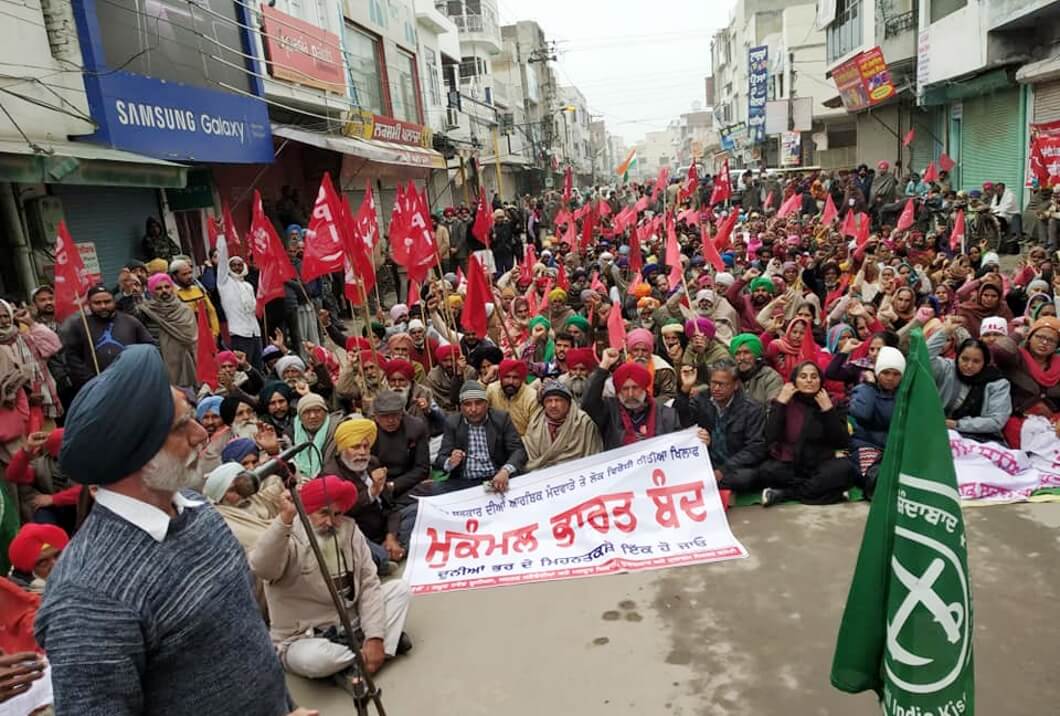 The farmers’ march in Mansa, Punjab was led by AIKMS National President Ruldu Singh, National Executive member Gurnam Singh and other leaders. The Mansa Bazaar remained fully closed. Farmers in several villages put aside their work in the fields and joined the bandh in large numbers. Farmers came out on the streets in support of the bandh in dozens of Districts in Punjab.

In Tamilnadu, AICCTU independently and jointly with other unions organised a month long  campaign by means of distributing pamphlets, street corner meetings, rallies Gate meeting and conventions through out the state for the success of the January 8th General Strike. Affiliated unions of Civil Supplies Corporation, Electricity Board and other factories served their strike notices with gate meetings. AICCTU was part of 4 regional level conventions organised by joint central trade unions and other sector wise  federations in Chennai, Trichy, Erode and Madurai. 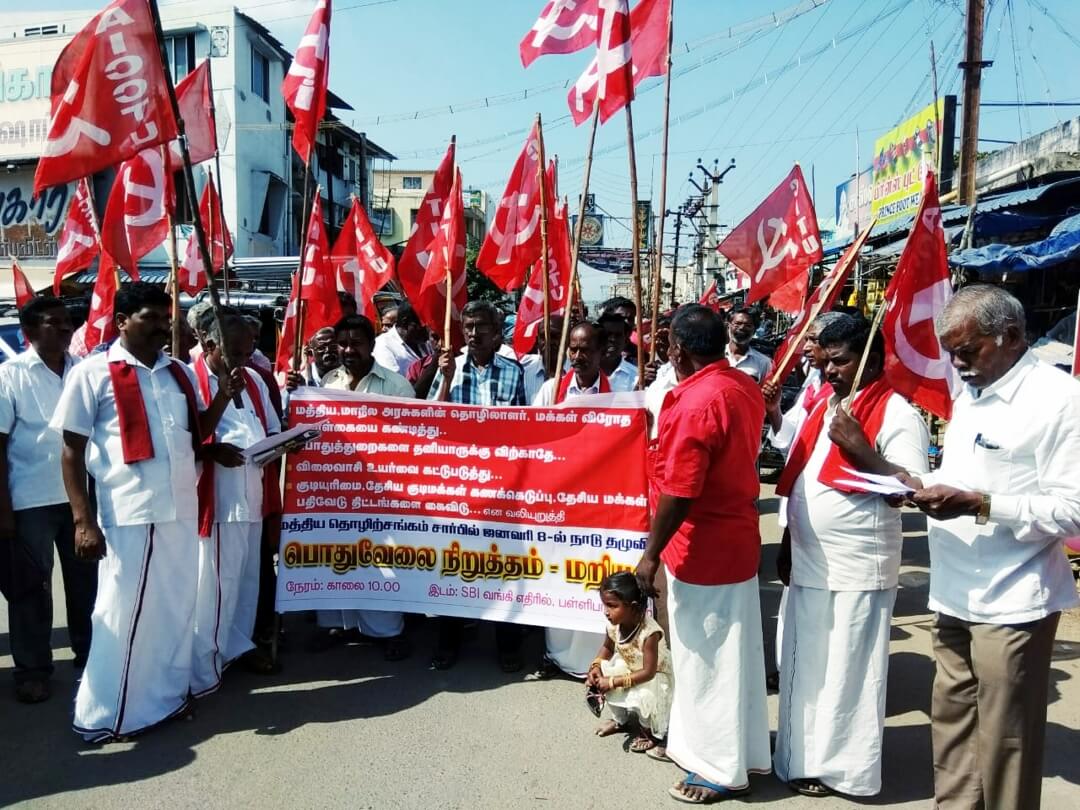 On the day of strike , AICCTU participated in  Rail and Road Roko agitations jointly with other CTUs in more than 25 centres of 15 Districts. In Kooduvancheri near Chennai, more than 100 AICCTU and RYA cadres were arrested after a scuffle with police when trying to block rail traffic. Comrade Iraniappan, Honorary State President of AICCTU led the agitation, while  State President of AICCTU  Comrade Sankarapandian courted arrest at Tirunelveli, and AICCTU State General secretary Com.Desikan was arrested at Chennai in a joint all TU protest. Comrade N.K.Natarajan, State secretary of CPI ML courted arrest at Karur in a Road Roko protest. 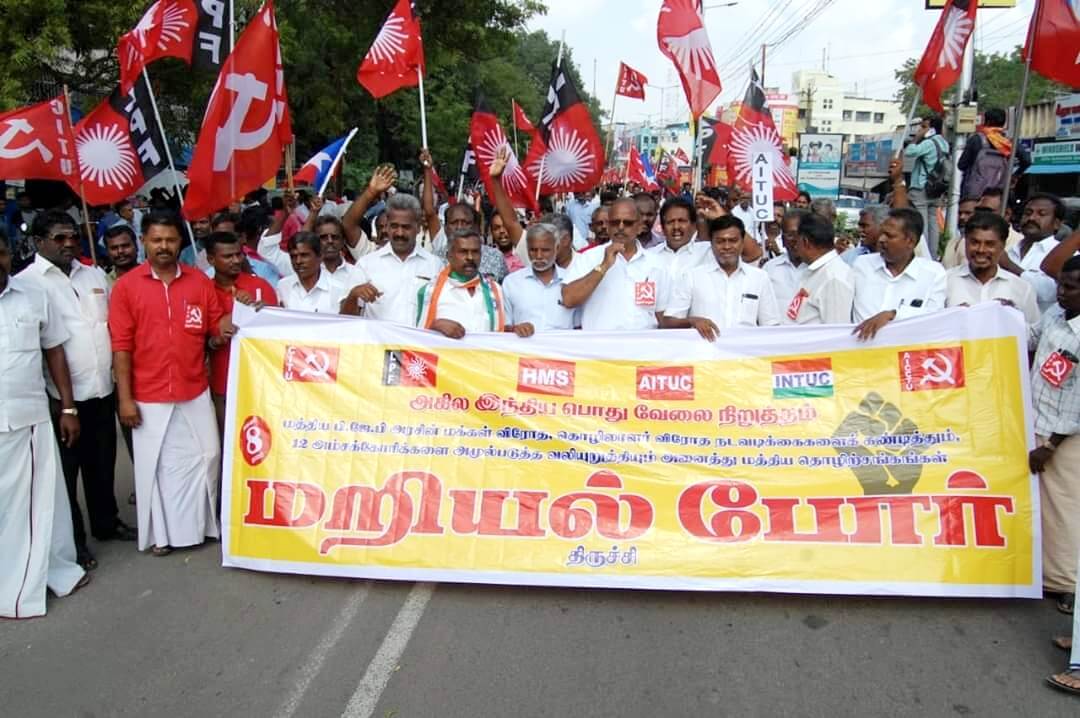 The Strike was total in major Industrial centres and there was a massive participation of workers in Chennai in Road Roko agitation. 10 minute stoppage of all traffic was implemented in Chennai at various centres by workers and Police arrested the striking workers. The Strike was almost total in state and central PSUs and shut down of Banks and Insurance companies.There was a huge participation by Transport sector workers also, but the Government managed few services with reserved contractual staff. Railway workers staged a massive demonstration on the eve of strike. Participation by scheme workers are remarkable and also huge participation by unorganised workers particularly construction workers. 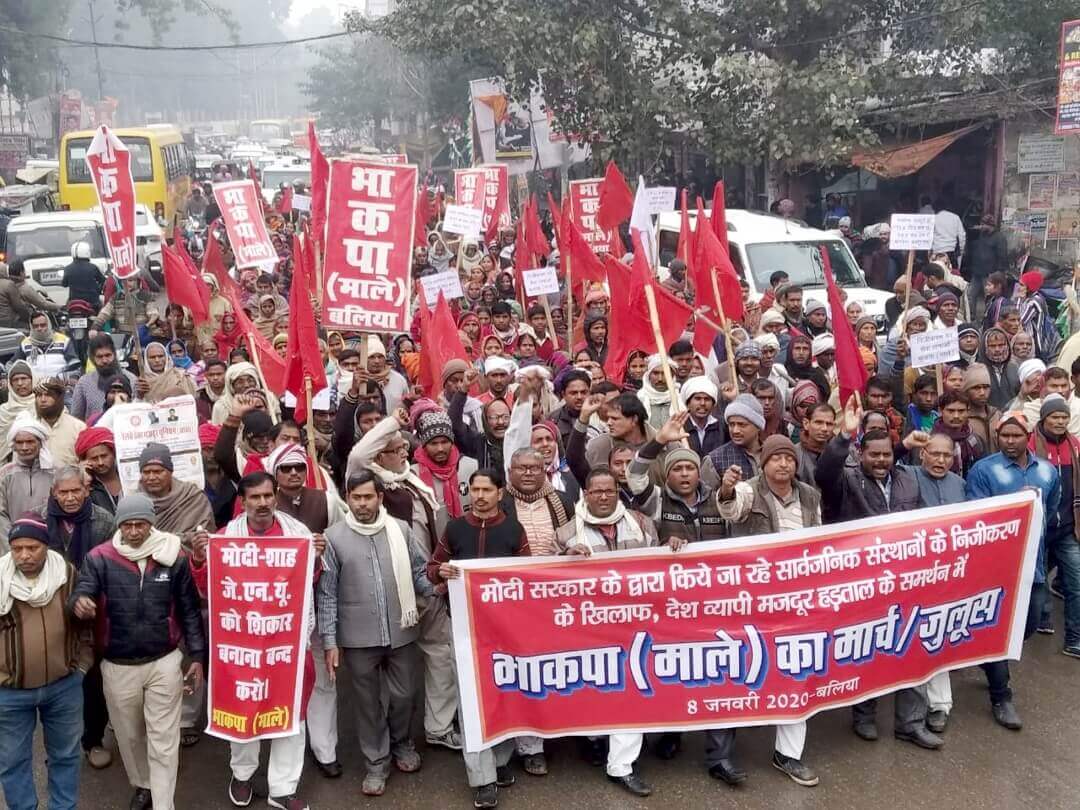 In UP, protest marches and meetings were held at Ballia, Ghazipur, Sonbhadra, and Mirzapur. The bandh at these places was led by left parties including CPIML. They were joined by Kisan Sangharsh Samanvay Samitai, AIARLA, and Kisan Mahasabha. In Kanpur AICCTU organized a rally in the Dadanagar-Panki Industrial Area which was attended in large numbers by women workers. The bandh was also effective in Phulpur, Allahabad where IFCO Phulpur Coontract Workers Union affiliated to AICCTU held a meeting at Gate No. 2 of the fertilizer factory. Speakers addressing the meeting condemned the anti-worker policies of the government and the state-sponsored violence on students across campuses. Meetings organized by Left parties were also held at other places in Allahabad city. 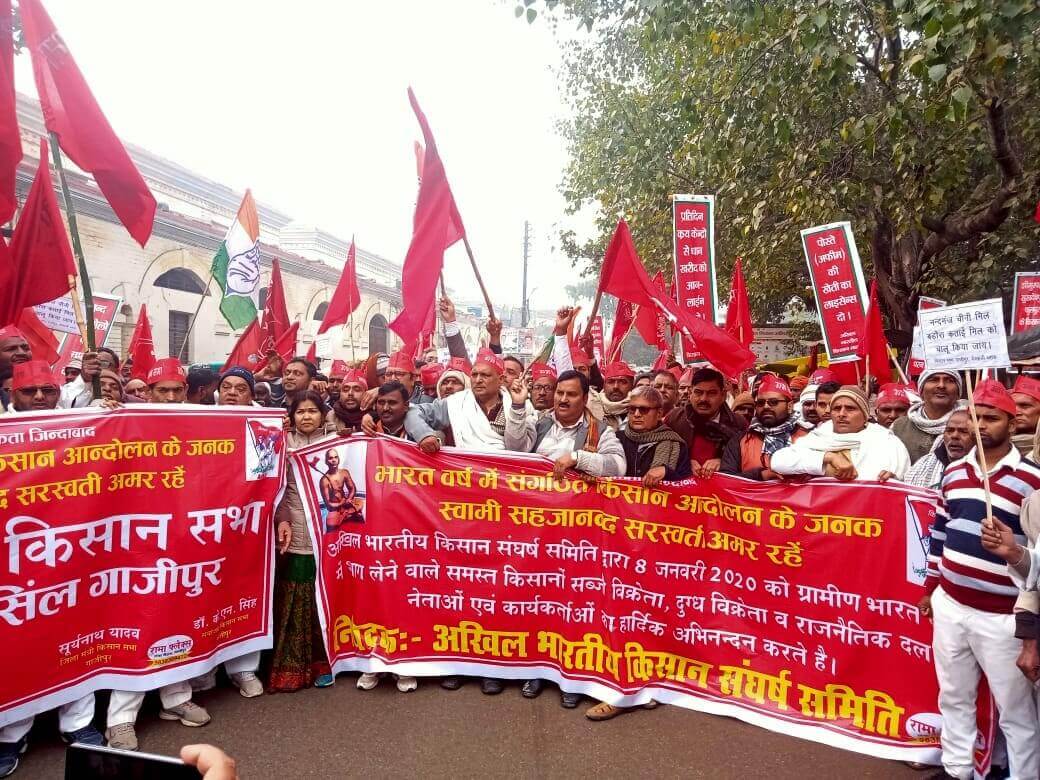 Protest marches and meetings were organized in other towns of UP including Varanasi, Moradabad, Mathura, Rae Bareli, Lakhimpur Kheeri, Sitapur, Azamgarh, Devaria, Kushinagar, Gorakhpur, Mau, Chandoli, Pilibhit, Bhadohi and Gonda. Memorandums addressed to the President were submitted to the administration at these places.