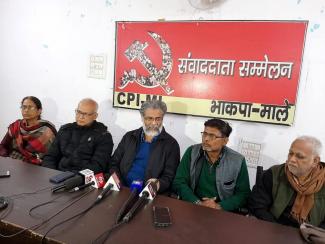 THE CPIML has for long demanded the protect of traditional water-bodies in Bihar. Needless to say these water bodies are threatened, not by the poor living by the side of and using those water bodies, but by the wealthy and powerful people of dominant communities who have captured these water bodies and lands around them. The Jal-Jeevan-Hariyali (water-life-greenery) scheme launched by the Bihar CM Nitish Kumar is nothing but a hypocritical pretense of environment protection and protection of the water bodies. In reality it is a conspiracy to evict the poor from lands they have long been settled on, while no action is being taken against wealthy dominant sections that have captured the lands and the water bodies. The scheme is a conspiracy to evict the poor settled for many years on pokhar-aahar-chaur lands (lands adjoining traditional water bodies) across Bihar without alternative arrangements. Eviction notices have already been issued to dalits and the poor in Eastern Champaran, Bhojpur and other districts. It is a known fact that the entire Bihar is in the clutches of dominant sections and the government is afraid to touch them in any way. For example, dominant sections have captured a large part of Kanwar Lake in Beguserai but instead of evicting them the Nitish government is targeting the poor.

Everyone wants environment conservation and clean drinking water in Bihar but this will be possible only if the government takes steps to revive and maintain water bodies like rivers, ponds and lakes. However, the government is not doing this but only making a hypocritical show by organizing a human chain. The Aurangabad cement factory and other factories in Bihar, for instance, have been given free license to guzzle ground water and emit huge pollution. The need of the hour is to revive the dying Ganga and other rivers and solve the problem of siltation. Nitish used to say this problem is because of Farakka but today when his government rules in both Delhi and Bihar, he is silent on this issue. The rivers of North Bihar are being destroyed by building embankments on them.

Moreover, Nitish Kumar, while claiming to oppose the NRC, had voted for the CAA and was implementing the draconian and anti-democratic NPR. The CPIML called upon people to expose the anti-poor and anti-democratic intent of the human chain, the Jal-Jeevan-Hariyali scheme, and the NPR-NRC-CAA package.

At many places in Bihar, young people joined the human chain with placards opposing the NPR, NRC, and CAA and calling out Nitish Kumar’s and the Bihar Government’s doublespeak on the issue.

More than 30 landless families settled for over 200 years on land in Tilath village, Piro Thana, Bhojpur have been issued eviction notices under the Jal-Jeevan-Hariyali scheme. It should be noted that these families are landless and have settled on this land for want of any other place to live. Instead of giving them parchas for the land they have been living on for so many years, the Nitish government has issued them eviction notices.

The people of the village held a protest march coinciding with the human chain under the Jal-Jeevan-Hariyali scheme that is razing down the homes of the poorest of the poor and riding rough-shod over their homes. 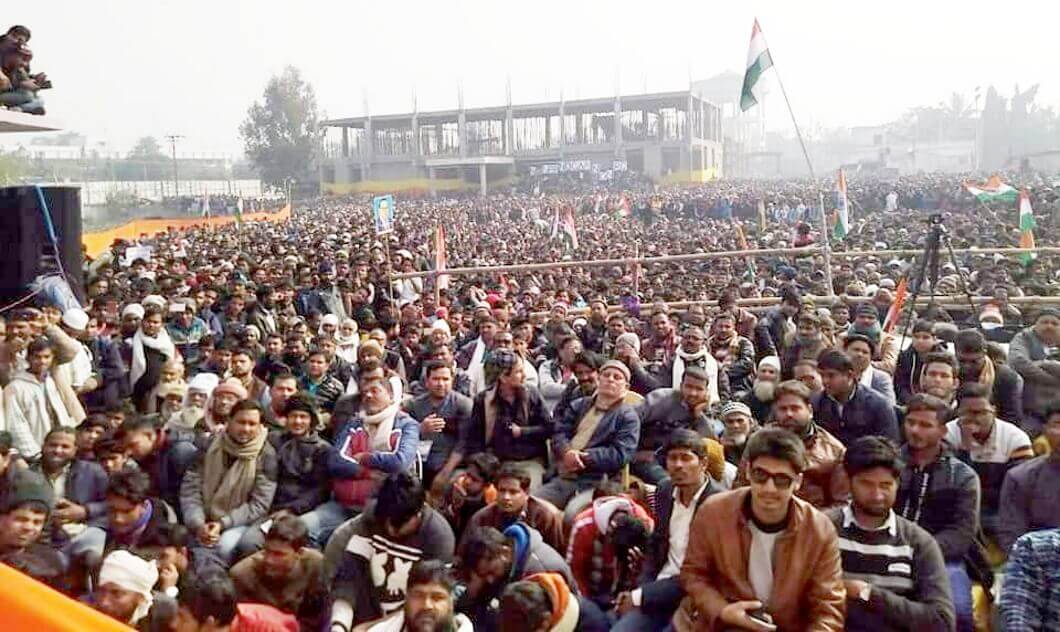 A massive public meeting was organized on 15 January 2020 at Laheriyaserai in Darbhanga under the banner of the ‘Save Constitution-Save Democracy-Save the Country’ campaign. The meeting was addressed by CPIML PB member Kavita Krishnan, renowned poet Imran Pratapgarhi and Uroosa Arshi, a Kolkata-based poet, presided over by former Councilor Nafees Ul Haq Rinku and conducted by Riyaz Khan Qadri.

Comrade Kavita said that in a democracy the people of a country elect their government, but the Modi government and BJP are planning to select the people and tailor the voter-base through CAA-NRC-NPR. The people of the country will not tolerate this. She further said that this draconian regime will strip not only Muslims but also crores of dalits and poor of citizenship, turning them into stateless people at the mercy of the government. People across the country are united in their protest against this anti-Constitution, anti-democracy law and will not rest until it is repealed. She said that NPR is the first step in the NRC ladder and by implementing NPR in Bihar the Nitish government is carrying forward the BJP agenda. Instead of playing this double game, Nitish should refuse to implement NPR in Bihar. 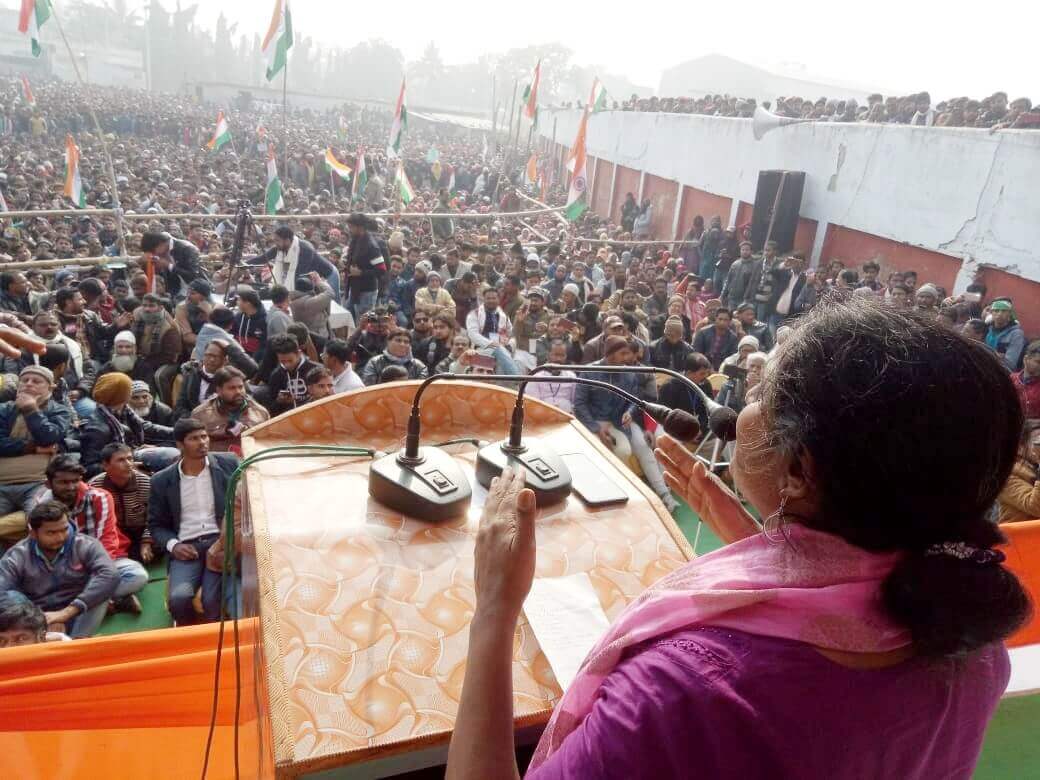 Addressing the meeting, well-known poet Imran Pratapgarhi said that the government is bent on murdering the country’s democracy but the people of the country will unite across religions and castes and foil this evil intent. He saluted the protests going on across the country in the face of brutal state repression, and recited a poem in praise of the protesters, saying that one Shaheen Bagh would defeat the entire state machinery of the Modi government. Urusa Arshi from Kolkata said that the people of the country are saying loud and clear in one voice that they will not accept the draconian CAA-NRC-NPR and the Modi government must listen to the voice of the people and repeal this law or face even greater protests. 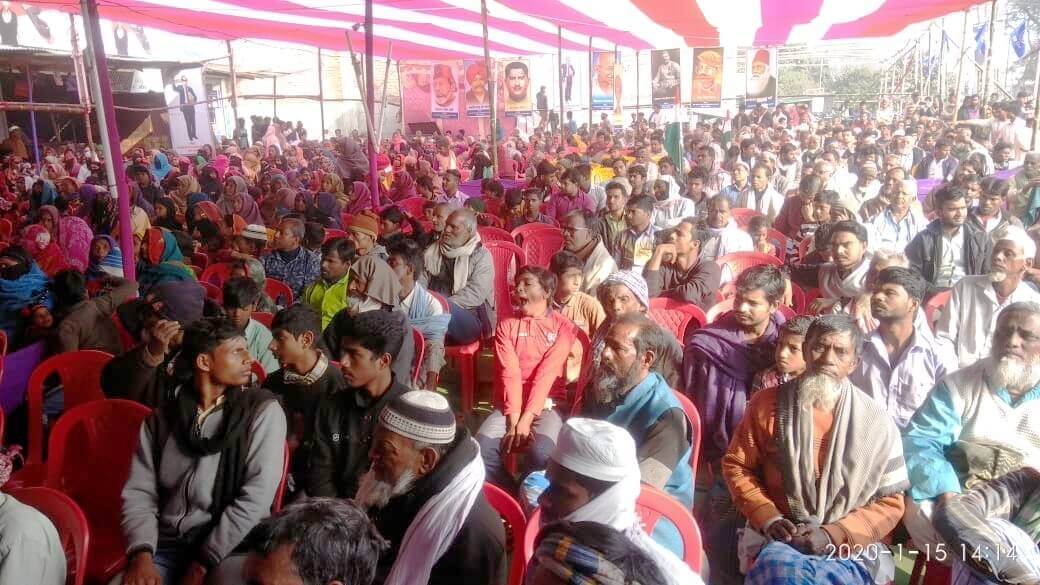 An indefinite dharna protest against CAA-NPR-NRC, under the banner of Ambedkar Sangharsh Vichar Manch is underway Ballia Lakhminiya Chowk in Begusarai. The protesters took the pledge that the dharna would continue until the government accedes to the demand of repealing CAA-NRC-NPR. Thousands of people from minority communities, dalits, women, secular parties, social activists and the poor have come together to give a befitting reply to the fascist repressive attacks by the Modi-Shah government and to condemn the brutal repression of peaceful democratic protests. Speakers at the dharna also demanded that Nitish-Modi government in Bihar must pass a resolution against the implementation of NPR in the State, else its talk of opposing the NRC is hypocritical.

CPIML State Committee member and District Secretary Diwakar, Ballia Block Secretary Noor Alam, Indradev Ram, AISA leaders Watan Kumar, Prashant Kashyap, Ajay Kumar and Abhishek Kumar shared the stage with the protesters to keep their morale high. The historic protest at Shaheen Bagh and other heroic protests across the country by youth, students, and intellectuals against state repression and fascism have become a source of inspiration to the people of India. 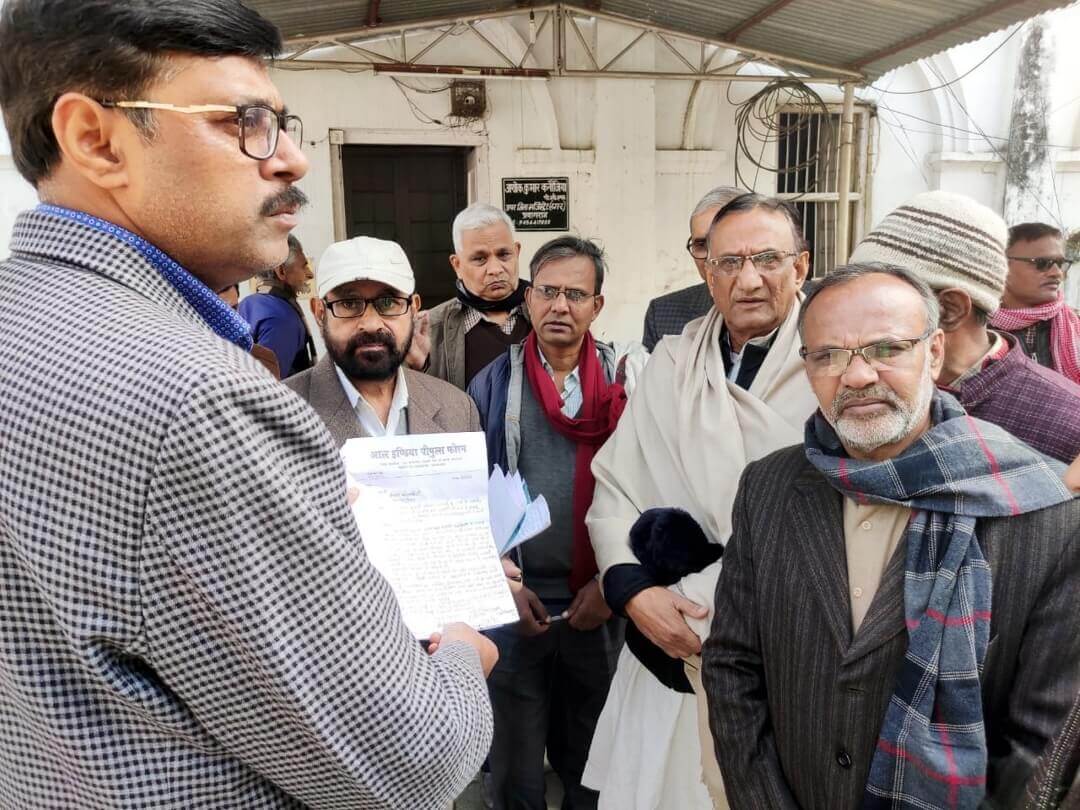 All India People’s Forum and a delegation of citizens held a symposium on 20 January 2020 and met the Collector and submitted a memorandum against the repression of democratic rights and the deportation of former IAS officer Kannan Gopinathan from Allahabad airport back to Delhi on 18 January 2020 when he was scheduled to speak at a symposium organized at Sardar Patel Institute at Opalibagh. The AIPF symposium passed a unanimous resolution condemning the behavior of the administration with the following demands: the guilty officials should apologize to the organizers of the event and the people of Allahabad; democratic peaceful protests against CAA-NRC-NPR should be given protection and security; unnecessary slapping of false cases against protesters in the name of Section 144 should be stopped; false FIRs registered should be withdrawn; the administration should guarantee that such incidents are not repeated in Allahabad; stopping Kannan Gopinathan from speaking is against the ‘Ganga-Jamuni Tahjeeb’ (composite culture) of Allahabad.