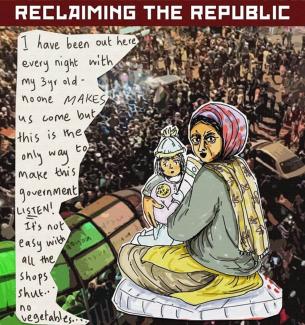 REPUBLIC Day 2020 marks the 70th anniversary of the Republic and the Constitution which proclaimed it. Never before in these seventy years has the Republic faced the kind of grave internal challenge it is facing today from the very executive which is entrusted with the power and responsibility of administering the rule of law in accordance with the Constitution. The basic character of the Constitution is today under attack. But Republic Day 2020 is also witnessing a massive countrywide awakening and assertion of 'we, the people of India' determined to save the Constitution and foil the fascist CAA-NRC-NPR design. This alertness, unity, and fighting zeal of ordinary Indians, with the youth and women in the forefront, constitute the biggest bulwark of the Constitution today.

The Modi-Shah regime has unleashed a serial Emergency. It began in August when the government's abrupt announcement deactivating Article 370 and robbing Kashmir of its statehood was accompanied by an indefinite lockdown subjecting the entire state to digital darkness and despotic governance. In December when the regime carried out the Citizenship coup in Parliament, it simultaneously resorted to a brutal crackdown on popular protests. UP in particular became a graveyard of democracy with the CM calling for revenge against protesters and the police and Sanghi goons unleashing a combined reign of terror. The police in UP is recruiting volunteers from private Sanghi militia like the Hindu Yuva Vahini and now Delhi Police have been granted Emergency powers to detain anyone under the draconian NSA. The trappings of a fascist dispensation are becoming visible quite rapidly.

On the CAA-NRC-NPR front, the government continues to dish out lies on a daily basis. On seeing the scale of protests against the NRC-CAA, it began to obfuscate about the NRC. Modi went to the extent of saying that nothing had been decided yet about an all-India NRC. The CAA has been pitched as a measure to grant citizenship to refugees and NPR is being camouflaged as an innocuous exercise to collect information for Census preparation and better implementation of welfare schemes. On the fourth and least discussed component of this ominous design, the detention camps, the Prime Minister shamelessly denied their very existence even as one more death was reported from Assam's notorious horror chambers, taking the detention camp death toll to 30.

Each of these lies has been exposed and the people being bombarded with the regime's lies must be armed with the truth. Finance Minister Nirmala Sitharaman has sought to refute the anti-Muslim discriminatory nature of the CAA by furnishing figures of people from Pakistan, Afghanistan and Bangladesh who have been given citizenship during the last six years of Modi government. According to her, 2,838 refugees from Pakistan, 914 from Afganistan and 172 from Bangladesh have got Indian citizenship during this period and this includes quite a few Muslims. This fact actually refutes the very rationale of the CAA. If refugees were getting citizenship under the erstwhile provisions of the citizenship Act, where was the need for the present Amendment? Likewise, there can be no hiding the fact that the NPR is just the foundation for NRC. What is particularly ominous about the NPR exercise is the arbitrary power given to the NPR staff to mark people 'doubtful'. Let us not forget that it is this 'doubtful' tag which has disenfranchised people in Assam and sent them to rot and die in detention camps.

The very project of CAA, NRC and NPR is based on a massive and mischievous lie. All through the last seventy years of our existence as a constitutional republic, every ten years we have had census and every five years we have had elections. Governments have issued ration cards, drawn up BPL lists and in recent years we have witnessed huge exercises to issue voter photo identity cards and Aadhaar cards. Why is the government now asking Indians to prove their citizenship? If non-citizens have voted the government to power, then the government has no right to occupy office. We have an elaborate apparatus and mechanism in place to guard our borders and regulate the entry of foreigners into the country. What then is the basis of this whole talk of a huge influx of 'foreigners', with the apex court even invoking terms like foreign invasion or external aggression? The Assam NRC excluded close to two million people and the BJP is now talking of dumping it because it is widely believed that the overwhelming majority of these excluded people are Indians. Yet, Amit Shah continues to talk about deporting crores of 'infiltrators' and the West Bengal state president boasts about banishing one crore Bangladeshi Muslims from West Bengal alone!

If the rhetoric of influx of foreigners is a big lie, the concern being shown suddenly for refugees who have not got their rights for all these years is also nothing but crocodile tears. Government's own intelligence top brass put the figure of such deprived refugees at a little more than thirty thousand before a Parliamentary Committee dealing with the Citizenship Amendment Bill. Refugees and activists who have consistently fought for their rights have first hand experience of winning their rights from voting rights to ration cards through relentless struggle. It was not the law but the bureaucratic apathy and lethargy and lack of sensitivity of successive governments that has delayed the process of effective empowerment and comprehensive rehabilitation of the refugee population.

This Republic Day, let us resolve to intensify the battle for repeal of CAA and stopping the NRC-NPR-detention camp exercise. The time has come when 'we, the people of India' must decisively assert to defend the Constitution and reclaim the republic.