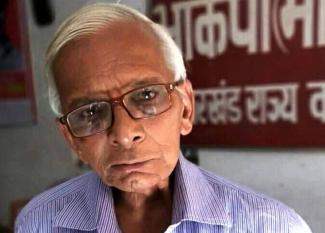 VERY few people in the Party knew that the original name of Comrade Sukhdev Prasad was Rathindranath Chakrabarty and that he hailed from Murshidabad district of West Bengal. For almost the entire duration of his revolutionary career spanning nearly five decades, he worked as a Party organiser in Bihar and Jharkhand where he acquired a completely new identity as Comrade Sukhdevji. During the first two decades of his long and ardous revolutionary life, when the Party functioned in underground state, Sukhdevji devoted himself to the task of building the Party organisation in Patna. As secretary of the Patna town committee, he used to maintain close daily contact with comrades in every neighbourhood with just a bicycle as his only means of transport. Much later in the closing years of 1980s, a modest secondhand moped would replace the bicycle. His living ties and integration with comrades and his tireless work ethic will remain a model for every secretary of a Party Committee.

In the early 1990s as the Party came overground, Sukhdevji got a new responsibility to develop Party organisation among railway employees. Here too he became the most living link among railway workers spread over different zones and departments. With the formation of Jharkhand, Sukhdevji was entrusted with the responsibility of expanding and consolidating the Party in this new state. From the Giridih-Kodarma belt to the Santhal Pargana region, wherever he worked he motivated and guided comrades with his thoroughgoing and painstaking work style. In the last five years after he underwent surgery for jaw cancer, his movement became restricted and talking too became difficult. He took over the responsibility of the work of Office Secretary in Ranchi. The smartphone became his new weapon, and written words became his new mode of communication. With the same old intensity and dedication, he started collecting and compiling reports of struggles and other organisational activities and became a regular correspondent for all our journals from Lok Yuddh and Shramik Solidarity to Liberation and ML Update.

Nobody who visited the Ranchi office ever heard him discuss his health conditions or his enormous past experience, he always lived in the present and fought for the future. Never making any demands for his own self, he was always the first to look after the well-being of his fellow comrades and whoever visited the office. At the time Sukhdevji was diagnosed with cancer, he was busy caring for his wife who too was suffering from cancer. There was a period when both of them were undergoing treatment for cancer in a Patna hospital and Sukhdevji would ask his visitors to go and visit his wife who was then in terminal stage. Circumstances changed, his own health conditions deteriorated, but Sukhdevji retained the same degree of revolutionary zeal and dedication to work. He will remain a role model for not just his selfless hard work and close concern for fellow comrades, but also for the adaptability and resilience with which he faced changing conditions and adverse circumstances.