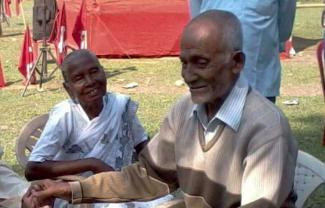 COM. Mujibar Rahman, the centenarian leader of Naxalbari Peasant upsurge passed away on December 29, 2019 evening at his residence in Naxalbari. During ‘Quit India’ movement in 1942 he was put to jail for few months in Dacca, his birth place. His first brief visit to Darjeeling district was made in 1939. He shifted to Siliguri before partition, and started off as a job assistant at Government Saw Mill. Here he came in contact with communist activists like Com. Keshab Sarkar, Com. Anil Saha and became a member of the workmen’s union.

In the late 1940’s his early association with the East Pakistan Communist Party had proved instrumental in helping the founder-members of the newly formed CPI in Darjeeling district. In 1955 he was commissioned to organize the landless and poor peasants in Maniram area of Naxalbari block. There he had worked with Com. Chunilal Goala, Panchanan Sarkar, Jogen Mukherjee et al.

In 1967 when the sharecropper Bigul Kishan had rebelled against the henchmen of the notorious Jotedar Buddhiman Tirkey, he was brutally beaten. But the local thana refused to receive an FIR against Buddhiman since he was the brother of the then Congress leader Iswar Tirkey. Next day, Com. Mujibar led a large number of peasants and laid siege before Tirkey’s house in spite of his intimidation with a gun. Under the leadership of Terai Kishan Sabha a petition was lodged by Bigul kishan in Calcutta high Court and it saw the first legal victory against the jotedar. That really set off lots of energy and building of strength among the poor masses, spearheaded by the kishan sabha. On May 24, 1967, the day the cruel Police Sub-Inspector Sonam Wangdi succumbed to popular wrath at Jhoru jote in Naxalbari, Com. Mujibar had organized undaunted a large rally against the police excesses at Maniram.

Com. Mujibar Rahman was felicitated along with the other veteran leaders of Naxalbari Movement like Com. Khokan Majumdar, Khudan Mallick, Dulal Chanda, Shanti Munda, Nemu Singha, Khemu Singha, Siril Oraon on 19 November 2016 at the outset of 3-days Jana Jagaran Yatra across Naxalbari-Khoribari-Phansidewa block to mark the 50th anniversary of historic Naxalbari Movement. He remained faithful to Communist party and was very popular to rural masses till his last breath.