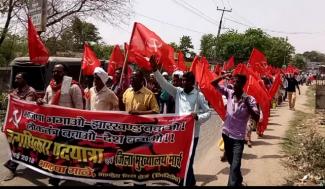 In response to the call of the 10th CPI(ML) Party Congress, the ‘Bhajpa Bhagao, Jharkhand Bachao’ (Evict BJP-Save Jharkhand) Jan Adhikar Yatra (march for people’s rights) was organized from 23 April to 1 May 2018 to appeal to people of Jharkhand to oust the anti-people, fascist, Modi and Raghuvar governments at the Centre and in Jharkhand. The first yatra started from Dumariya village in Mohanpur Block, Devgarh District. The following are brief reports of the initiatives taken in various districts:

People in large numbers campaigned with flags and banners at Gonda Panchayat and appealed to the villagers to participate in the May Day programmes. In Meral Block 4 teams campaigned for the Padyatra at Padwa, Okhar Gadha, Daleli and Duldulwa areas. CPI(ML) District Secretary Com. Kalicharan Mehta flagged off the Padyatra. Addressing the meeting he said that people in every sector are in distress under the BJP rule. All rights are being snatched away including the right to food, land and employment. The Raghuvar government, instead of providing assistance to the people in the scorching summer, has increased electricity rates by 98% and put the people in more distress; on the other hand capitalists and corporate houses have been given a waiver of 8%. He appealed to the people of the villages to participate in large numbers at the Jan Adhikar Mahasammelan on 1 May and pledge to drive out the BJP and save Jharkhand.

Another Padyatra from Dhurki was flagged off under the leadership of Com. Kameshwar Vishwakarma. A Janadhikar Sabha was organized at Indira Gandhi Park. The speakers pointed out that successful protests by the people of Jharkhand had foiled evil designs like amendment to the CNT SPT Act, Land Acquisition Act, and now the government is trying to loot lands through the back door in the guise of Land Banks.

A Padyatra was held on May Day at Dhanbad. Flags were hoisted at all Party offices, Union offices and collieries. At 12 noon a motorcycle rally was flagged off from the Steel Gate in Dhanbad which culminated with garlanding of the Labour statue at Shramik Chowk and a meeting at Randhir Verma Chowk. The programmes in Dhanbad district were organized under the joint banners of the CPI(ML) and AICCTU.

At Bokaro, a March was held on May Day under the joint Left banners of AICCTU, CITU, AITUC and UTUC (SUCI) starting from Naya Mor and culminating in a meeting at Mazdoor Maidan. About 500 workers participated in the march. Earlier from 23 to 29 April a Janadhikar Padyatra was taken out through 20-25 villages in Kasmar Block led by Budhan Karmali.

At Koderma, a Yatra was organized at 5 villages neighbouring Bekobar Dumridiha focusing on issues related to land, food, employment rights, women’s safety, corruption, sale of the Red Fort, old age pensions, ration cards for the poor, increased electricity and petrol rates, starvation deaths in Jharkhand, justice for Kathua-Unnao and other rape and murder victims, arrest of culprits in the Navadih riots at Domchanch Block. It has been decided to carry out the Padyatra programmes from 3 May to 7 May in the district.

At Latehar, May Day was observed under the banners of CPI(ML) and Gram Swaraj at Manika Block. Rallies were taken out from Manika Panchpheri Chowk and from Thana Chowk. Both rallies merged and marched through the city, arriving at the Block premises for a meeting in which 500 people participated.

At Godda, Left parties marched together and addressed a meeting on May Day. The march was taken out from Godda Gandhi Maidan at 12 noon. Activists from CITU/CPIM and AITUC/CPI also joined the march which culminated in a meeting at the Ashoka Pillar. Janadhikar Padyatras were taken out between 23 and 30 April at 4 villages in Godda Block. Similar campaigns were also held in Rayagada district of Odisha and in various districts of Andhra Pradesh.