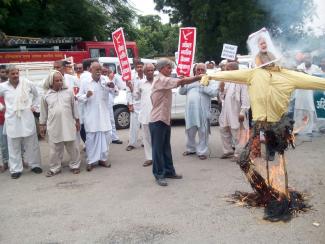 THE Modi government has completed four years in office. Is there any past parallel that can help us in judging these four years of Modi rule? For Narendra Modi himself, the permanent reference point is Nehru. He loves to juxtapose himself to Nehru and believes that he is giving us a taste of what governance would have been like had Sardar Patel been the Prime Minister in place of Nehru. In fact, Modi has time and again told his NRI audience that it is only after 2014 that the eternally ashamed Indians have finally got something to take pride in! In speech after speech, he twists facts and figures and invents history to present his government as the best thing to have happened in a long time. Within Sangh circles, the rise of the Modi regime was hailed as the return of power to the hands of a ‘proud Hindu’ after 800 years! To the more mythologically minded fans, Modi is nothing short of the reincarnation of Ram who is liberating India much like Ram had redeemed Ahalya!

Four years ago when Narendra Modi had assumed office with a lot of promises, there was a distinct upbeat mood among his core supporters and plenty of goodwill among the wider electorate. Today that hope has clearly given way to a growing sense of betrayal and disappointment. The economy is stagnating and deeply mired in crony capitalism. The banking sector and the railways – the two most prominent signs of modern India for the common Indian – have both reached the lowest point in terms of operational efficiency and public trust. With a major fall in international oil prices – the benefit of which had never reached the common consumer – Narendra Modi had famously presented himself as a Prime Minister who brought good luck to the country. Today petrol and diesel prices are shooting through the roof while the rupee is in a state of free fall in the international currency market.

As far as economic administration is concerned, there have been three ‘decisive’ measures taken so far by the Modi government – demonetization, GST and the linking of almost every service to Aadhaar. All three measures have been introduced in a way which shows utter contempt for the normal consultative processes and established conventions of parliamentary democracy – whether through dramatic Prime Ministerial announcements or surreptitiously – and all of them have proved hugely disruptive and damaging. The addition of two crore jobs per year was a key promise that had allowed Modi to reap a huge electoral harvest. The responsibility of ‘job creation’ has now been shifted from the government and the corporate sector to the job-seekers themselves! The government’s role is now limited to offering unsolicited advice to job seekers to sell pakodas (or open a paan shop or buy a cow, as the new Tripura CM has put it) and making misleading claims by citing small one-time loans of about Rs 50,000 under the Mudra scheme as ‘job creation’! The downward spiral of the economy is matched in reverse only by the ever increasing propaganda budget of the government – Rs 4343 crore for the ubiquitous Modi billboards that have mushroomed across India in the last four years!

If the people are feeling increasingly frustrated and angry with the government, it is however not just because of the worsening economic situation. The rise of the Modi government at the Centre followed by the BJP’s serial victories in state elections has emboldened the entire Sangh brigade with its ever proliferating squads of thugs and goons and lynch mobs to go berserk. The government has usually greeted them with approval and impunity. Instead of administration and delivery, governance has become synonymous with a situation of internal war on more and more sections of people. The academic environment is being systematically vitiated in university after university as the government pursues its campaign against students. Women and girls are subjected to horrific rapes and murders and the ruling party is busy defending the rape accused. In Kashmir people are being treated like prisoners of war, in Assam the whole state is up in arms against the mischievous citizenship amendment bill that seeks to smuggle in religious consideration in determining citizenship, in Uttar Pradesh Dalit activists are being gunned down and jailed under National Security Act while the police is being encouraged to bypass the framework of law and justice and enforce an ‘encounter raj’.

In short, the BJP’s desperation to grab power and capture every institution and post in the country and impose the RSS ideology and policies in every sphere is posing an open threat to the federal structure and constitutional foundation of our republic, and to the lives of whole sections of our people. Democracy in India has faced many challenges in the past –the Emergency in the 1970s, the anti-Sikh pogrom in the wake of the assassination of Indira Gandhi, the 1992 demolition of Babri Masjid in open defiance of the Supreme Court and Constitution, the 2002 Gujarat genocide are critical phases that the country cannot easily forget. Whataboutery may have emerged as the most ‘powerful’ argument for the propagandists and ideologues of the regime to justify every crime and every crisis, but when we look at the overall picture, there is indeed no past parallel for the kind of total disaster brought forth by the four years of Modi Raj.

But it will be wrong to say that we had no forewarning about the danger we are facing today. We need go no further than Ambedkar to assess what has befallen us. “Bhakti in religion may be a road to the salvation of the soul. But in politics, Bhakti or hero-worship is a sure road to degradation and to eventual dictatorship.” Ambedkar’s words ring so ominously true today, when hero worship and personality cult threaten to snuff out any informed debate in our politics. And if we look at the political content of the tyranny that is threatening to eclipse democracy in India, Ambedkar was very categorical in his assertion: “If Hindu Raj does become a fact, it will, no doubt be the greatest calamity for this country.” Ambedkar had asked Indians to avert this calamity at any cost.

It is reassuring to note that the people of India have sensed this calamity and are trying to resist it with all their might. The struggles of peasants and workers, Dalits and Adivasis, students and youths, women and common citizens that we are witnessing today across the country have the potential of a powerful mass awakening that can not only harness the numbers but more importantly generate the will and vision for a stronger and deeper democracy. The fifth year of the Modi government will be a decisive juncture for the future of democracy in India. The battle lines are clearly drawn and all who have a stake in democracy must join hands to overcome tyranny and avert the calamity of which Ambedkar had forewarned us seventy years ago. 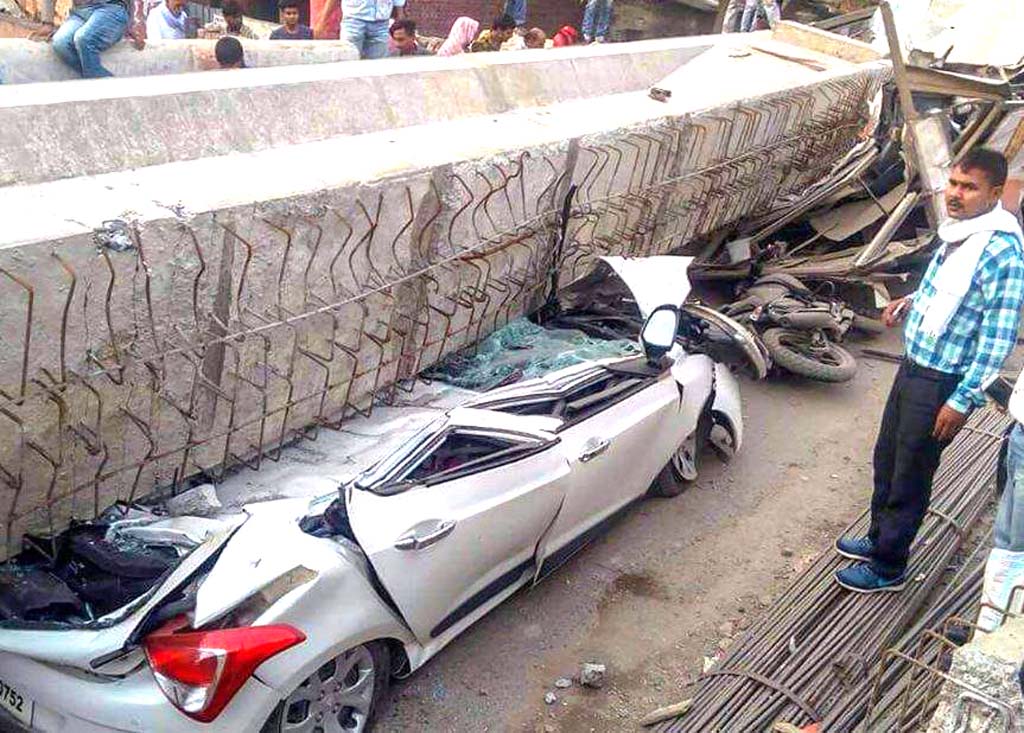 The CPI(ML) condemns the horrific flyover collapse in Varanasi that has resulted in deaths and injuries of many. Nothing but criminal negligence on the part of Government officials is responsible for this unconscionable loss of lives.

The Varanasi MP – Prime Minister Narendra Modi – had described a similar collapse of a bridge in Kolkata as an act of God to punish the West Bengal Government for its crimes – what does he have to say about the flyover collapse in his own constituency, in a state ruled by his own party? The loss of children’s lives in a Gorakhpur hospital and now the flyover collapse are not acts of God – but acts of a callous and criminally negligent Government of the State that cares only for communal and anti-Dalit hatred and violence – not governance and people’s welfare.

The party expresses condolences to the families that have lost loved ones in this tragic incident, and demands compensation for those killed and injured. We also demand that all those responsible for the negligence that resulted in this incident, be punished.