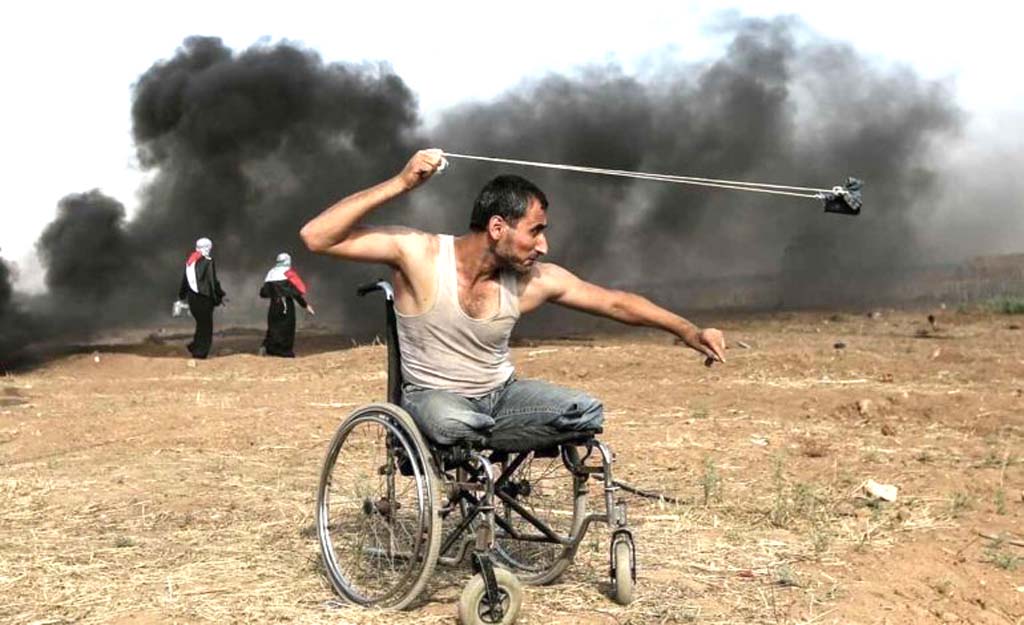 Fadi Hassan Abu Salah - a Palestinian double leg amputee - was killed as he took part in the protests on May 14 2018 in Gaza. He was killed in the sniper fire by the Israeli army. In his wheelchair, wielding his catapult defiantly at the Israeli snipers, he was a modern-day David fighting the colonial Goliath, expressing the spirit of the Palestinian resistance.

Palestine Shall Be Free!

The world will forever remember the Israeli massacre of defenseless, peaceful Palestinians on May 14, 2018 in Gaza - the same day that a delegation of nefarious Zionists led by Ivanka Trump, Donald Trump's daughter, held a ceremony to mark the official relocation of the US embassy to the Israeli settler colony from Tel Aviv to Jerusalem.

Palestinians and many other nations have countless such calamities to remember.

In a subsequent report from Israel, the New York Times explained in detail how Israelis, by and large, could not care less how many Palestinians were slaughtered by their army. "A day after their soldiers killed 60 mostly unarmed Palestinians in Gaza," The New York Times reported on its Facebook Page, "Israelis were defiant, defensive or blase," with " a healthy dose of served-them-right in some corners".

On May 14, more than 1,300 Palestinians suffered wounds from live fire and, unsurprisingly, some of the weapons used in the massacre were US-made rifles. When the "presidential biography" of Barack Obama is written, we will remember the $38bn in military "assistance" he gave Israeli soldiers so they could kill Palestinian men, women, and children. 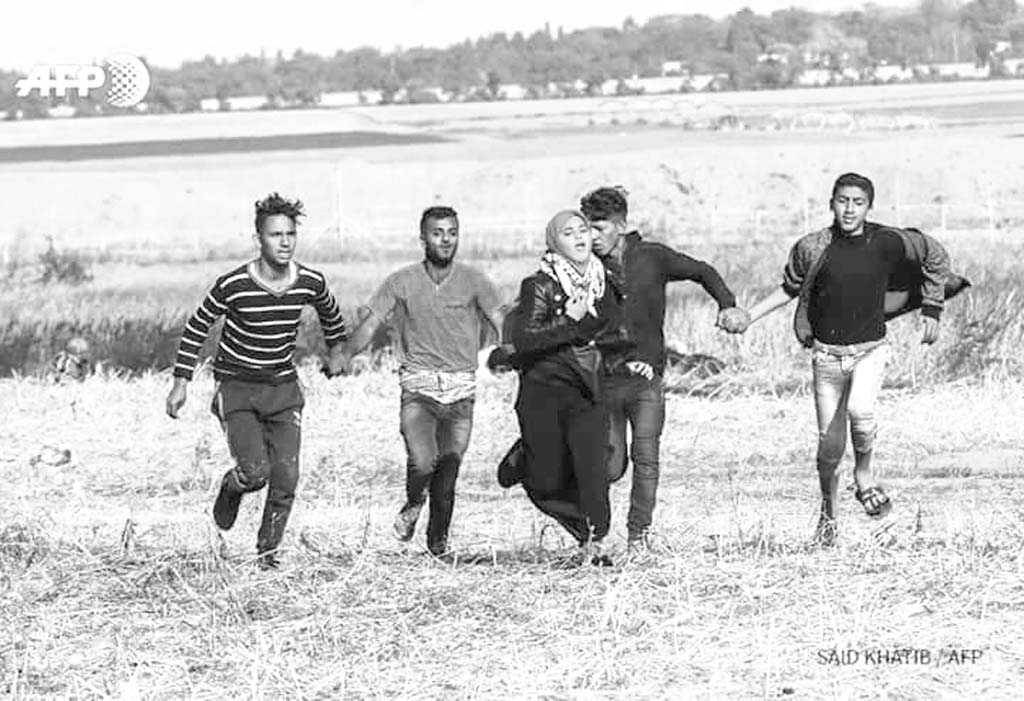 Between March 30 and May 16, the Israeli army cold-bloodedly and in full view of the world murdered more than 110 Palestinians, including 12 children, two journalists and a paramedic. More than 12,700 Palestinians have been injured during the protests, most of them requiring hospitalisation.

After this massacre committed by Israelis against peaceful Palestinians, Benjamin Netanyahu and every other Israeli leader has to be held accountable for Israeli war crimes.

Every single US president since 1948, from the most popular and the most detested, dead or alive, must also be held to account for unquestioningly supporting a state that has systematically committed war crimes for decades.

As must Nikki Haley and all other US ambassadors to the UN before her who have vetoed the global community's condemnation of Israel. As must the entire spectacle of "Western media", abusing and distorting these facts to exonerate their favourite settler colony. As must any artist, any academic, any public figure who crosses the Boycott, Divestment, Sanctions picket line to sing and dance over the dead bodies of Palestinians for the pleasure of Israelis.

With their bold, brilliant, and historic move called the Great March of Return, Palestinians outwitted all their political leaders (Fatah and Hamas alike), turned the clock back 70 years to the moment of their pernicious expulsion from their homeland, and put the Israeli occupiers on the defensive. The Saudi Zionist Prince Mohammed bin Salman had told them "to shut up". They showed him they wouldn't.

Because of their heroism, the Israeli flag, the very term "Israel" is now - as it has always been - synonymous with mass murderers, with massacres, with land thieves, with incremental genocide, with war crimes. All Palestinians did was to demonstrate for their right to return, and Israeli soldiers began shooting at them en masse.

Since 30 March, Palestinians have been staging a spectacular act of nonviolent civil disobedience. Israel and its political and media allies in the West have done everything to diminish the significance and the power of what Palestinians have achieved.

There have been disgusting editorials in the Washington Post and the New York Times; there have been outrageous statements by Western governments; there has also been a mindless regurgitation of the Israeli line blaming Hamas for the violence by alleged progressives like Bernie Sanders.

But despite all these malicious efforts to smear the march, the truth still shines brightly. Palestinians sent a signal to every civilised, decent, human being on planet Earth to carry their message forward and honour their revolutionary uprising to reclaim their homeland and secure their civil liberties.

With one courageous and ingenious political move, Palestinians exposed Israel for what it is - an illegitimate colonial project - nothing less nothing more - and they did so as the Zionists were celebrating their "independence", which Palestinians rightly call the Nakba. The Great March of Return was the moral and symbolic triumph of the Palestinian Nakba over the Israeli "independence".

On May 14, the fate of our humanity was written in Gaza - no one on this day could be a bystander. You are either a human being with a moral conscience and on the side of Palestinians, or you are on the other side. This was an epic battle between defenceless good and viciously armed evil.

What is left to do after the May 14 massacre? Everything! On that day, Palestinians taught the world a priceless lesson - a master class in their power of dignity and defiance. With one bold act of nonviolent revolutionary mobilisation they told the world that Palestinians are not going anywhere - that Palestine is theirs, they are the master of their destiny - the inhabitants of their homeland - and neither their corrupt or incompetent leadership, nor those shameless colonists occupying their country have a say in the matter.

On May 14, Palestinians restored our humanity by sending us back to school to learn the renewed meaning of the immortal "Invictus" (by William Ernest Henley, 1849-1903).

"Out of the night that covers me," they sang with their bullet-riddled bodies, broken bones, and beautiful souls:

Black as the pit from pole to pole,

thank whatever gods may be

For my unconquerable soul.

In the fell clutch of circumstance

I have not winced nor cried aloud.

Under the bludgeonings of chance

My head is bloody, but unbowed.

Beyond this place of wrath and tears

Looms but the Horror of the shade,

And yet the menace of the years

Finds, and shall find me, unafraid.

It matters not how strait the gate,

How charged with punishments the scroll,

I am the master of my fate:

I am the captain of my soul.

Palestinian Women At The Forefront 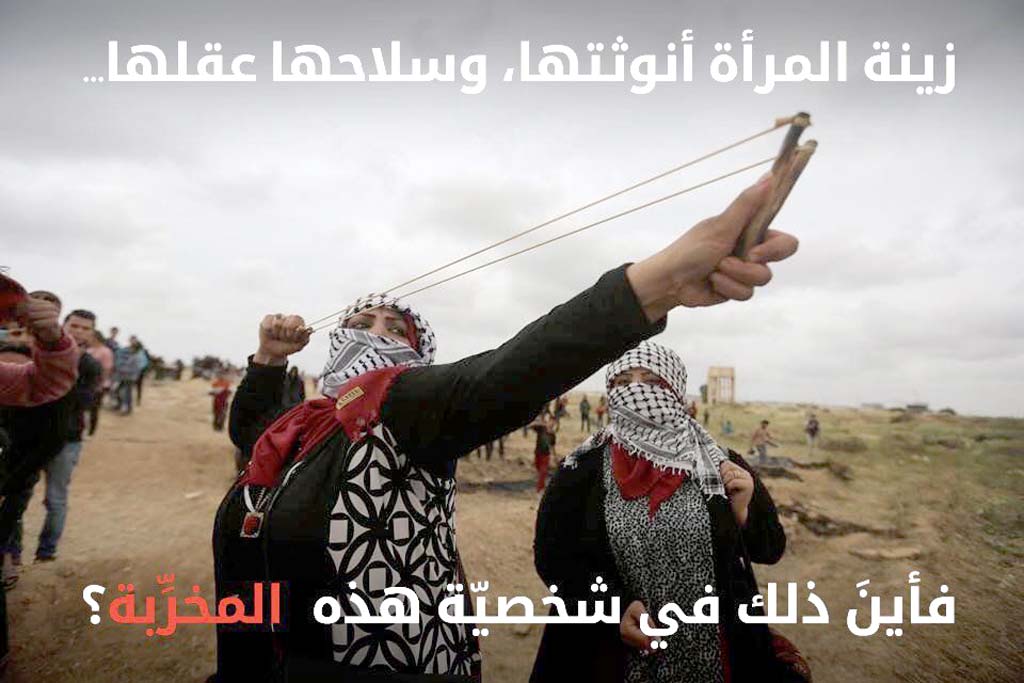 Palestinian women are at the forefront of the ongoing intifada. Israeli army officers and political leaders try to shame them using the kind of misogyny that one associates with Hitler’s prescription that women remain confined to “Kinder, Küche, Kirche” (children, kitchen, church). Sharing this photo of a young woman using a catapult, Israeli army spokesman Avichay Adraee said “A good woman is an honorable woman who cares about her house and her children. Women who are arrogant and without honour do not care about these things, they act with unfeminine barbarism that does not care for society's opinion.”