Skip to main content
Feature 31 May 2018
Thoothukudi Massacre: EPS And Modi Have Blood On Their Hands! 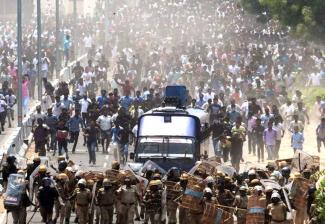 The people of Thoothukudi in Tamil Nadu had been resisting Vedanta’s Sterlite copper smelter which posed serious dangers to the environment and people’s health. Having protested peacefully for 100 days without any response from the Government, the people had erupted in militant protests on May 22 2018. Instead of doing what it should have done and announced willingness to meet with protestors and heed their concerns, the Government of Tamilnadu allowed/instructed the police to unleash what is nothing but a massacre, that has killed 11 people including a young girl, and injured many.

The CM Edappadi Palaniswami, who with his deputy O Panneerselvam loses no opportunity to display fawning sycophancy to Modi and the BJP (even congratulating Modi on the Karnataka ‘victory’ even before the verdict was out and the Government formed!), has justified the massacre. BJP spokespersons on TV have declared their support for the massacre, declaring, “If we did not shoot Tamil Nadu protesters they would have become Kashmiris.”

Vedanta has been a top donor to the BJP and the Congress too – and a Delhi HC verdict had held those donations to be illegal. Vedanta was thrown out of Niyamgiri by a valiant struggle there. The BJP has now enacted laws allowing donations by Vedanta and other MNCs to remain secret. Vedanta now puts out advertisements welcoming Modi to the UK and his vision of “Make In India”. Modi’s Make In India is nothing but an open invitation to corporations like Vedanta to loot in India – which explains the PM’s ringing silence on the Thoothukudi massacre.

The Modi Government and the EPS Government of TN have blood on their hands. They are behaving like a private army of corporates to crush the people and snatch all their rights and resources.
Resist This Company Raj! Ban Sterlite!