Skip to main content
Report 31 May 2018
Monday Massacre: Tens of Thousands Stand in Solidarity With Palestinians 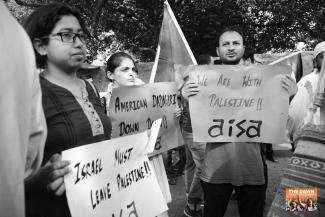 TENS of thousands of people across the globe protested against the massacre of more than hundred Palestinians by the Israeli occupation forces during the Great Return March. On Monday, Israeli forces massacred around sixty Palestinians who were protesting against the United States’ shifting of its embassy to Jerusalem. The embassy move coincided with the eve of the 70th anniversary of the Nakba, as well as the culmination of the six week-long Great Return March. The Nakba of 1948, also known as the Catastrophe led to forceful expulsion of millions of Palestinians from their land, establishing the state of Israel.

Demonstrations and protests across the world were held seeking an end to Israel’s oppressive colonization of Palestine over decades.

In Mumbai, India Palestine Solidarity Forum condemned the Indian government’s response to the US decision on Jerusalem, as well as to the massacre, as “double-faced.” The Government of India shamefully betrayed decades of India-Palestine solidarity going back to India’s freedom struggle and Gandhiji, to issue a vague statement on the Jerusalem issue and to remain silent on the massacre, even as it claimed in its statement that it held an “independent” position on Palestine.

The WFTU statement read, “on the behalf of the 92 million workers the WFTU represents all over the Globe, we are joining our voice with the people of Palestine who are protesting and we demand: Stop to the aggression of the murderer state of Israel.

The National Union of Metalworkers of South Africa (NUMSA) was part of the picket line organized in front of the US Embassy in Johannesburg. A statement issued earlier termed the “decision by the U.S. to recognize Jerusalem [as] an act of extreme provocation against the people of Palestine.”

Welcoming the decision of the South African government to recall the country’s ambassador to Israel, NUMSA demanded the “immediate expulsion of the Israeli ambassador from South Africa and that all trade ties between the two countries must be severed.”

The Boycott, Divestment and Sanctions (BDS) movement has demanded an international military embargo on Israel. Apart from the arms embargo, the BDS movement has also initiated Boycott HP campaign, for company's tacit collusion in the Israeli occupation.

“By providing computers to the Israeli military, that is presently running a carnage in Gaza, HP enables the illegal occupation of Palestine. HP maintains the racist population registry that is the basis for the ID card system,” a press release from BDS India noted. “HP maintains its spin-off, DXC Technology, in an illegal Jewish-only settlement in West Bank thus furthering the colonisation of occupied Palestinian territories,” the statement added.

In Argentina, several thousand people marched towards the Israeli embassy in Buenos Aires to protest the killings. In a statement, the Argentine Committee in Solidarity with the Palestinian People, which was one of the key organizers of the protest, “demanded that Argentina sever diplomatic and commercial ties with Israel. Criticizing the media, the statement denounced its silence about the occupation and that a genocide was being termed a conflict.

Venezuelan President Nicolas Maduro condemning the Israeli violence, tweeted “Today, we are all Palestine. Their dead, injured and hopes are ours”. A protest was held in front of the US Embassy in Caracas against the massacre and the US embassy move.

The Social Movements of Alba “denounced the ongoing Nakba, the colonization and genocide of the Palestinian people”, by Israel and supported by United States.

The Organization of Solidarity of the Peoples of Africa, Asia and Latin America (OSPAAAL) denounced “the new and criminal Zionist massacre being endured by the defenseless Palestinian population in the Gaza Strip.” In a statement, OSPAAAL expressed its “unrestricted support to the just demand of the Palestinian people of the right to the return of the refugees, the end of the occupation and the legitimate right to the creation of the independent Palestinian State within the borders prior to 1967, with East Jerusalem as its capital.” 

(Excerpt from a piece by climate physicist Chirag Dhara in Wire.in, 15 May 2018) One of the very few things empowering about the situation in Palestine is the solidarity from support groups around the world.]

Palestinian civil society has called for Boycott, Divestment and Sanctions (BDS) on Israel, similar to the international movement that isolated the Apartheid regime in South Africa.

The BDS movement seeks the boycott of Israeli products, economic sanctions against Israel and withdrawal of investments in the country until such time as it recognises the Palestinian people’s right to self-determination and complies with international laws by ending the occupation.

Responding to this call, thousands of artists around the world (Irish, South Africa, US, Latin America) are refusing to perform in Israel today, including global super stars like Roger Waters, Lauryn Hill and Chuck D.

Holocaust survivors, Israeli historians, and the late scientist Stephen Hawking, among scores of others, have also endorsed a boycott of Israel.

There are a whole host of specific actions that we can take as individuals or communities. For instance, a recent call advocates boycotting HP products because of its complicity with the Israeli occupation technology and taking action against HSBC bank to end its complicity in the Israeli arms trade. Several other examples are listed on the BDS website, each of them imminently actionable, sometimes needing nothing more than a social media account.

BDS has had several recent successes. Some examples are the Israeli state water company losing contracts across countries and Israeli ships being blocked from docking at ports across the world. It is clear that BDS can be as powerful as it is peaceful.

The recent history of South Africa tells us that boycott movements can effect profound change if enough of us take up the call.

The ball is now in our court.