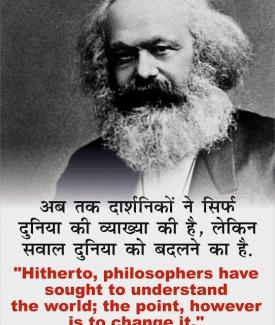 On 5th May, the 200th birth anniversary of Karl Marx was celebrated by CPI (ML) activists throughout the country.

The CPI (ML) and AICCTU organized a symposium in Bhilai, Chhattisgarh to mark the bicentenary of Karl Marx, who inspired social change and the struggle for equality in the world.

On the occasion of Marx’s bicentenary, AICCTU and CPI (ML) organised a poster exhibition in Bawana industrial area, one of the biggest industrial areas in Delhi. They also distributed a large number of pamphlets among the workers. Receiving the pamphlet, a worker who had migrated from Bihar exclaimed, “oh this is the party of Com. Vinod Mishra, we will definitely get in touch with your comrades”. Several workers also shared their oppressive working conditions. A women worker who worked in a 10 hour shift shared that the owner only gave them Rs. 6000, despite them working for such long duration in a day for four years now. Lakhs of workers in Delhi continue to be denied minimum wages. To make their condition worse, there are fire breaks every other day claiming several lives. The lives of workers are being sacrificed for the profits of their owners.  Several workers requested AICCTU leaders to help them organise strikes at their workplaces as there seemed to be no other way to make their employers understand. Establishing the connect with so many workers, AICCTU comrades resolved to strengthen the workers’ struggles in Delhi.

On May 19, the CPI(ML) held a public meeting in Delhi on ‘Marx And Our Times’, which was addressed by CPI(ML) GS Dipankar Bhattacharya, Marxist economist Prof Utsa Patnaik, Marxist political thinker Prof Achin Vanaik, and journalist Urmilesh.

The meeting began with a reading of CPI(ML) General Secretary Comrade Dipankar’s article ‘Marx Bicentenary: ‘The Long March to Human Freedom Continues,’ as a position paper for the discussion.

On 6 May, the SIDCUL Shramik Sanyukt Morcha held a public meeting in Rudrapur which was addressed by leaders of CPI(ML), CPI, Inquilabi Mazdoor Kendra, Krantikari Lok Adhikar Sangathan and various unions.

On 13 May, an event commemorating the bicentenary of Karl Marx's birth was held in Gurdaspur, Punjab, in which a large number of youth and women workers participated. This event was addressed by the party GS Comrade Dipankar. Comrade Dipankar also spoke at a Marx Bicentenary event at Bhubaneshwar on 22 May, in which a large number of intellectuals, students and workers participated.

At Tripura, a CPI(ML) procession marking the Marx Bicentenary was attached by BJP cadres. Comrades Gopal Roy, Subhas Sarkar, Naushad Ahamed Sarkar, Manik Mia Khadim, and Santosh Das were injured. The saffron goons shouted that Karl Marx is a foreigner, why don’t the communists celebrate the birthday of Vivekananda? The police witnessed the incident but refused to intervene. The saffron miscreants then went to the CPIM party office and tried enter the office and attack comrades there.