Skip to main content
Commentary 29 May 2018
The Jinnah Portrait is only a Pretext, Democratic India Is the Real Target! 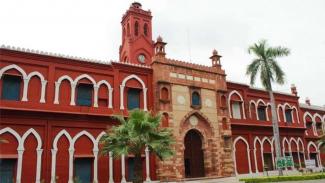 FACED with a couple of crucial by-elections in Uttar Pradesh (Kairana LS in Shamli-Muzaffarnagar belt and Noorpur Assembly segment in Bijnaur district) – rendered more crucial by the shock defeat suffered by the BJP in Gorakhpur and Phulpur in March – and the ongoing no-holds-barred battle for the Karnataka Assembly, the BJP is desperately looking for some fresh fuel to ignite the fire of communal polarization. And the Sangh brigade has chosen the Aligarh Muslim University for this purpose. A portrait of Jinnah which has been there for the last eighty years has been turned into a pretext to launch a premeditated assault on the university. After Hyderabad and JNU, yet another university has been turned into a battleground.

The premeditated nature of the whole thing becomes very clear from the run-up to the May 2 assault. A student seeks permission to hold an RSS shakha inside the campus. The local MP writes to the university asking the Jinnah portrait to be removed. And then the Hindu Yuva Vahini issues a 48 hour ultimatum before launching the attack soon after. The HYV attackers are accompanied by the police and instead of arresting the HYV trespassers, policemen take up the cudgel and rain lathis on the AMU students, badly injuring several of them, including AMUSU office-bearers. It is also significant to note that at the time of the attack on the AMU campus, former Vice President Hamid Ansari was present in the AMU guest house, just a few steps away from the main gate being stormed by the attackers.

The portrait of Jinnah has been hanging on the walls of the AMUSU office since 1938 when the Union honoured him with life membership. This is no honour bestowed exclusively on Jinnah. The first person to get that honour was Mahatma Gandhi in 1920 and since then a host of eminent personalities including Nehru, Ambedkar and Azad have been awarded the same honour and their portraits too hang on the walls of the AMUSU office. In fact Mr. Hamid Ansari was also scheduled to be honoured with life time membership later that evening and the programme had to be cancelled because of the attack. It is also well known that AMU is not the only place where there is a Jinnah portrait. From Mumbai to Andhra Pradesh to Indian Parliament, the Jinnah legacy is acknowledged quite prominently in many places. In February 2015, Modi as Prime Minister had inaugurated the Bombay High Court museum which showcases Jinnah’s barrister certificate as a relic of history. And let us not forget that Jinnah was one barrister who fought legal battles for both Tilak and Bhagat Singh.

Clearly, the controversy over the Jinnah portrait is a political creation of the BJP. They are bent upon creating controversies out of nothing – if it is the Jinnah portrait in Aligarh, it is the practice of Muslims offering prayers in public places in Gurgaon. Aligarh Muslim University has been a reputed centre of higher education and research in the country (even though it has the word Muslim in its name, non-Muslim stu dents and teachers have a significant presence in the university compared to the Benaras Hindu University where non-Hindus have a very nominal presence) and historically it has played a major role in the development of the Muslim intelligentsia in India. By linking it to Jinnah and hence to Pakistan, the Sangh-BJP brigade wants to reinforce the communal narrative that treats Muslims in India as being unpatriotic and committed to Pakistan.

It is one thing to debate the roles of various streams and leaders of the Indian freedom movement or revisit the events and trends that led to the unfortunate partition of India amidst massive bloodshed and human migration. But vilification of Jinnah and creating a controversy over his portrait is nothing but an exercise in divisive politics and hate campaign. When the Constituent Assembly of India met for the last time in November 1948, it paid homage to both Gandhi and Jinnah and that was the right spirit. Pakistan may have been created out of the erstwhile undivided India, but treating Jinnah as an ‘enemy’ runs counter to the shared history and culture of the two nations and using him as a pretext to run down a reputed university and vilify an entire community within the country is an unpardonable crime against democracy.

It is also patently wrong to treat Jinnah as the original advocate of the flawed and disastrous two nation theory in India. Years before Jinnah, Savarkar had declared Hindus and Muslims as constituting two different nations and his whole vision of Hindutva had developed on the basis of this idea of communal nationalism. It is no wonder that the people who are attacking AMU over the pretext of the Jinnah portrait also clamour for awarding India’s highest civilian honour Bharat Ratna to Savarakar. The majority of Indian Muslims had rejected Jinnah in theory and practice when they refused to go to Pakistan and opted to stay in India despite the bloodshed of Partition. Today the Sangh brigade has brought India to the brink of another partition where the very existence of India as a constitutional democratic republic is at stake. We Indians will once again have to take a firm stand against the menace of communal nationalism that is threatening to disfigure and destroy the pluralist mosaic that is India.