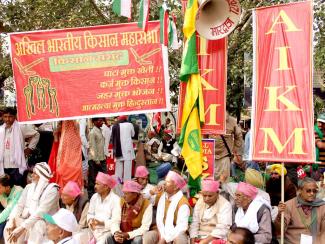 Liberation takes a brief look at what four years of Modi Raj have meant for India’s people, and how it has affected key areas of economy and society.

What His Government Did

Corruption - Both Corporate and Political

One of Modi’s biggest election planks was his claim that he would fight and eradicate corruption and bring back black money. In fact, his Government has enabled and participated in some of the worst corruption scandals in India’s history.

Modi came to power promising to create 2 crore new jobs per year. Instead, his Government has destroyed jobs, sold jobs through corruption, and mocked the unemployed by advising them to sell pakoras, even as his Government makes life for small vendors and pakoda sellers far more difficult!

Open Defence of Rapists and Perpetrators of Violence By BJP Governments

The introduction of death penalty for rape of minors is nothing but a draconian measure to take attention away from the fact that the Government has been protecting not punishing rapists who are close to the BJP’s ideology.

The Sangh Parivar, with the approval of the Modi Government, has unleashed countrywide, organised violence against inter-faith relationships which they brand as ‘love jehad’ - an abusive term that combines patriarchy with Islamophobia.

This propaganda legitimises and encourages ‘honour’ crimes and killings. The Cobrapost sting revealed that Sangh and BJP leaders, as part of this campaign, indulge in abduction, beatings, and even drugging of women to force them to give up their Muslim partners.

Adityanath (Ajay Singh Bisht, who styles himself ‘Yogi Adityanath’) was handpicked by Modi, Amit Shah and the RSS to become the Chief Minister of Uttar Pradesh – India’s largest state. In a detailed write up titled ‘Matrashakti — Bharatiya Shakti ke Sandarbh Mein’ which was uploaded in 2014 on his own website, Adityanath echoed the Manusmriti to write that according to Hindu scriptures, “women are not capable of being left free or independent…women need male protection from birth to death… a woman is protected in her childhood by her father, by her husband in her youth and by her son in her old age.” This idea of women being under a man’s protection all her life (father, husband, and son) is straight from the Manusmriti.

The Mirage of 'Vikas' (Development)

The collapse of the under-construction flyover in Varanasi, the city that is Modi’s own constituency and which he promised to turn into Kyoto if elected an MP from there is a metaphor for ‘vikas’ (development) in Modi Raj. 18 people lost their lives due to the flyover collapse.

The deaths of children in the Gorakhpur hospital because the Government ignored repeated reminders to pay the oxygen company its dues are another example of what Modi’s promises of ‘vikas’ in India and BJP-ruled states has amounted to.

The Modi model like its Gujarat prototype, consists of callous disregard for basic needs and safety of people, compensated for by false claims, fake images, manipulation of statistics and taking credit for the achievements of previous Governments.

Modi declared in 2014 that “Mujhe Maa Ganga ne bulaya hai (I have been called here by Mother Ganga).” He announced the Namami Gange (I salute Ganga) mission. But four years later, all the Mission has to show is some huge religious ceremonies featuring Modi.

What The Modi Government Achieved 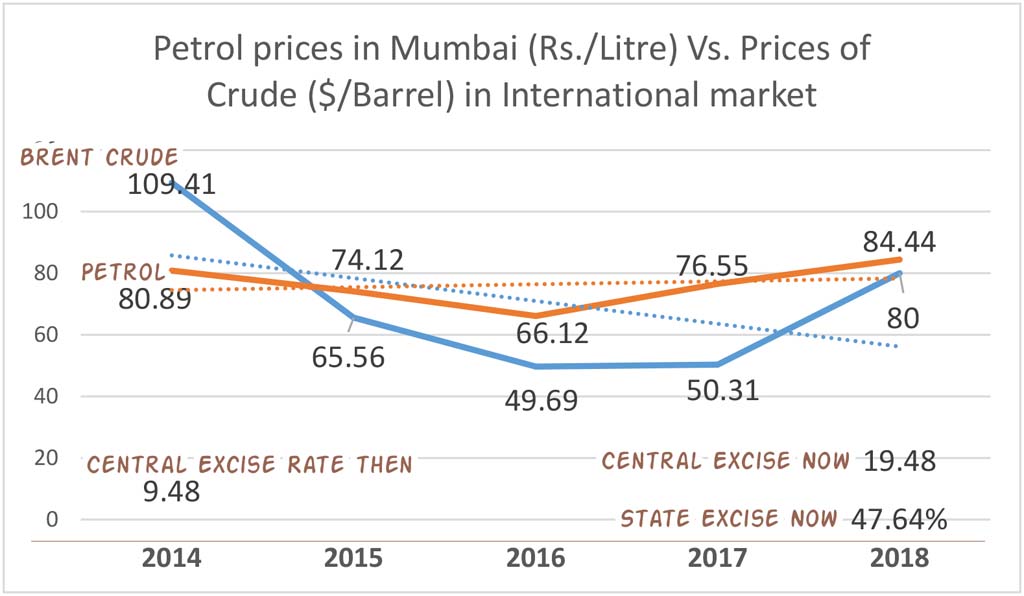 In US an average American spends only 0.5% of daily per capita income to buy 1 litre of Petrol. In India the prices of petrol are, quite unreasonably, among highest in the world. Escalating prices of international crude oil are not as much of a factor as the Government's own high rate of indirect taxation levied on fuel. The Modi Government raised excise duty on petro products nine times between November 2014 and January 2016. Every now and then, this Government raises excise duty to make the ordinary citizen bear the burden of NPAs and defaulting CEOs' plunder of Indian economy!

Now under Modi Sarkar an average Indian has to spend 20% of her daily income to buy 1 litre of Petrol. Petro products have been turned into world's highest taxed commodity by Modi government. This, in a country where high fuel prices are bound to push up the prices of food and other necessaries, is shameful.

In spite of evidence of Aadhaar being a tool of corporate and state-sponsored mining of private data, and of exclusion of the poor from their entitlements, the Modi Government has repeatedly lied in Court to defend Aadhaar, even asserting that citizens do not have any sovereign rights over their own bodies. Ever since Aadhaar was imposed as a condition to access rations, pensions etc there have been many deaths of extremely poor women, children and elderly people dying after being denied their benefits due to Aadhaar failures.

A ‘State of Aadhaar 2017-18’ report produced by Idinsight for Omidyar Network, a multinational research organisation that is known to have close links to Modi Minister Jayant Shah, is being cited as proof of the widespread acceptance of Aadhaar. Ironically even this report admits that over 20 lakh people from 3 states have been denied PDS rations due to Aadhaar failures.

The report also admits that there is no credible evidence or data to back the Government's claims that Rs 83,000 crore has been saved in four years because of Aadhaar, direct benefit transfer (DBT), digitisation, etc through deletion of fake, duplicate, or ineligible accounts. It appears that like other claims by Modi, these numbers are simply fake, pulled out of the air at random.

The report also disproves the claim made by the Government in Court that privacy was an elitist concern – it found that more than 96% of respondents (including most low-income respondents) in the three surveyed states cared about how the Government used their data. The report also cites another report (Privacy on the Line 2017) prepared by Dalberg, CGAP, and Dvara Research, which found that "low-income individuals" were "highly protective" of their personal information, including their Aadhaar numbers.

The Modi Government has spent more than any previous Government has on publicity. Compensating for its lack of performance by tweaking perceptions through an advertisement blitz, the Modi Government has spent over Rs 4,300 crore on publicity in four years. To put this in perspective, let us recall that the erstwhile UPA regime spent a total of Rs 2658.24 crore in 10 years (two terms) on publicity. We do not know if this expenditure covers payment of the troll armies who spread fake news and abuse online – that is, we do not know if people’s taxes are used to fund fake news and death/rape threats by trolls followed by Modi online.

VIP Hate speech is certainly one area where the Modi Government is Number One. A study by NDTV found that under the Modi Government, VIP hate speech – hateful and divisive language (the study excluded sexist remarks about women) skyrocketed by 500%. 90% of hateful comments made during the NDA's current terms are by BJP politicians. Moreover, the BJP promoted politicians for hate speech, making serial offender Adityanath the UP CM and another serial hater Anant Kumar Hegde a central Minister.

Such hate speech accompanied by violence against dissenting voices has marred India’s reputation in the world. India ranked 138 in 180 nations in the Reporters Sans Frontières (Reporters Without Borders) Press Freedom Index. The report noted: “Any investigative reporting that annoys the ruling party or any criticism of Hindutva, an ideology that blends Hindu nationalism with an almost fascistic rhetoric, elicits a torrent of online insults and calls for the death of the reporter or writer responsible, most of it coming from the prime minister’s troll army. This unbridled verbal violence serves to support a leader who asserts himself as a strongman, a leader whose authority does not tolerate being undermined by reporters or editorialists.”

Every-day Violence against Dalits and Minorities

There has been a spectacular increase in organized political violence against Dalits and minorities (Muslims particularly, as well as Christians).

Lynching of Dalits, lynching of Muslims, violence against Kashmiris at the hands of State forces in the Valley and non-state mobs all over India, murder of Dalit activists and protesters, and arrests of Dalit leaders like Bhim Army leaders who challenge the anti-Dalit violence, are now commonplace.

There is a steady stream of VIP hate speech justifying such violence, and attacking India’s Constitution.

Mainstream media and Whatsapp are both used to create a fertile climate for such violence.

The Modi Government, failing on all other counts and facing people’s anger, seeks to divide people using communal and casteist hate, in a desperate bid to retain/regain support. For Modi, hate and violence are the last hope to secure a victory in 2019.

We, the people, face the challenge of defeating the hate, ensuring that unity triumphs over divisive violence and prejudice, and exposing the Modi Government’s lies and betrayals.  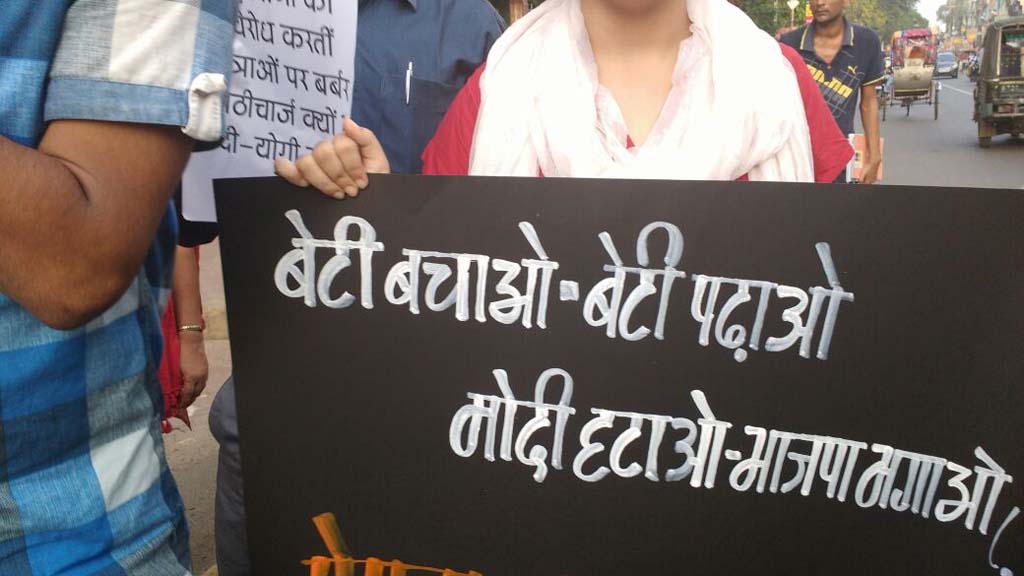