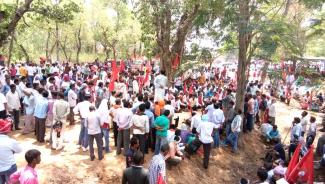 From April 22-May 1, AIARLA conducted a campaign, “Rural India Demands Employment”. In the face of severe drought, continuing agrarian distress and denial of Cauvery water rights, rural Tamil Nadu is experiencing an acute employment crisis. Heavy outward migration is taking place. Women and aged have been rendered jobless. In such a situation MGNREGA is the only source of rural employment. But since the Modi Government assumed power the job scheme has been put in peril. Not only has fund allocation been slashed, wages are kept pending and several executive orders have virtually made the scheme almost non-existent.

Application filling in panchayats became a mass campaign. Particularly women and the aged were very curious and active in enrolling their names. They were very angry towards the Modi government for sabotaging the scheme. On May 1, workers, women in large numbers participated in the gram sabha. In Nagappatinam, Tanjore districts hundreds of workers enthusiastically participated. In gram sabhas, resolutions were passed to start the scheme immediately. Altogether 3000 people in 46 gram sabhas participated. We could see the workers’ assertion in the gram sabhas where we played a key role.

In the course of the campaign, corruption to the tune of Rs 16 lakhs was unearthed in Vizhupuram district. There is a scheme called “approach road to fields”. For every panchayat under this scheme Rs 16 lakhs was allotted, in which wage, material ratio is 6 lakh and 10 lakh. But workers were not employed, only machines were employed. The money was transferred to the workers’ account, and stealthily the money was siphoned off. Ruling AIADMK leaders bank officials and revenue officials colluded to loot the entire amount. An AIARLA investigation shows that in the entire districts such fraudulent actions were rampant. The amount involved in Vizhupuram district alone to the tune of Rs 160 crore!

Due to AIARLA’s efforts this corruption appeared in newspapers prominently. Workers were very angry that they had been cheated. These made the corrupt people nervous - they threatened AIARLA organizers, and tried to divide the people.

AIARLA decided to organize the workers in as many as panchayats possible to put pressure on the district administration to punish the culprits and repay the money to workers. The main demand was a massive job scheme to ensure that a large number of people get jobs for at least 150 days as was declared by the State Government, restoration of desilting of lakes, canals, and ponds, and afforestation activities.