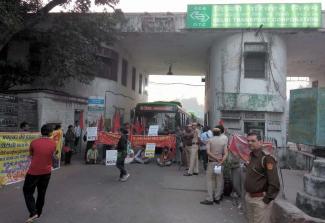 The Delhi Transport Corporation (DTC) bus service is the city’s lifeline – as an affordable public transport system for Delhi’s poor and middle class and also to tackle the menace of ever-increasing pollution. But successive Governments are hell bent to dismantle the public transport system by contractualizing and privatizing the DTC, and introducing private buses on the city roads. The Kejriwal Government, just before the Assembly Election promised a complete overhaul of the public transport, but unfortunately has broken all the promises. The Delhi Government has also completely ignored the backbone of this public transport system, the transport workers and especially the contractual workers. The workers have tremendously suffered in terms of job security, wage, working conditions and irregular and uncertain pension and medical benefit after retirement. The Government’s response has been terribly callous even after countless submission and agitation to ensure the basic minimum livelihood and dignity for the transport workers.

The working condition of DTC contractual workers are continuously worsening.  The DTC Workers Unity Centre (affiliated to AICCTU) recently released a short film Chakka Jam - showing a glimpse into the homes and daily lives of the contract workers. In Chakka Jam, Mintu, a contractual worker and DTC driver, narrates about the terribly exploitative workplace. He gets paid even less than Rs. 10000 per month, from which he has to spend Rs. 6500 for room rent. He leaves home around 3 – 4 am in the morning to desperately get the duty, and sometime he just waits and waits, and comes back home without even getting the duty. That’s how our Government treats the workers of the largest transport provider in the national capital!

Very recently, the DTC shockingly reduced the wage of contractual workers by a whopping 25% (Rs. 3500 – 4000) with the excuse of a Delhi High Court order which on technical grounds quashed the earlier notification of the Delhi Government, revising the minimum wage for skilled, semi-skilled and unskilled workers. DTC and Delhi Government could have easily continued with the revised wages but it preferred to take advantage of this HC order for retreating from its own decision. DTC workers immediately protested and met the Delhi Transport Minister but to no avail.

Strike Ballot: The Beginning of a New Chapter in DTC Workers’ Movement

Facing this tremendous anti-worker step by the Government, the workers under the banner of the DTC Workers’ Unity Centre decided to give a call for Strike Ballot, focusing on three basic issues - equal pay for equal work, taking back the circular on the reduction of salary and no private buses in DTC. Between the 25 and 28 of September the DTC Workers Unity Centre conducted a strike ballot across all the Delhi Transport Corporation Depots in the city. In total, more than ten thousand votes for the strike ballot were cast by DTC workers in over 40 depots across the national capital. On each day voting started at 5 AM in the morning when workers come in for the first shift of the day and went on till 5 PM when the last shift for the day starts.

The strike ballot is an unprecedented move taken by the union in the DTC where the last strike happened 30 years ago in 1989. The DTC workers participated and voted enthusiastically in the strike ballot even though in many depots the Depot Managers dissuaded the workers from participating in the voting. A team of lawyers acted as Observers for the voting process. The counting of the ballots took place on 29th September at DTC Headquarters in Indraprastha Depot. 10,069 workers, i.e. an overwhelming majority of 98% workers, voted in favour of the strike. 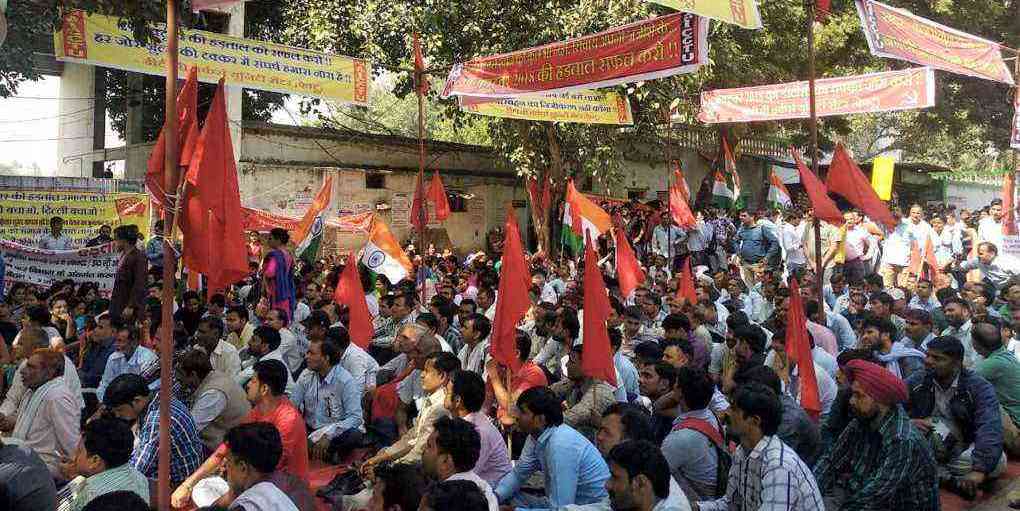 After the result of strike ballot came out, the vigorous campaign for the 29th October strike intensified. On 22nd October, the DTC workers held a Namak-Roti-Mirch (salt-chapatti-chilies) dharna at the Indraprastha bus depot reminding the AAP Government of its broken promise to regularize contract workers. The depot was reverberated with the slogan “Aaj karo, urgent karo, sabko permanent karo”, (Make all workers permanent NOW) which was the slogan that the DTC workers had raised as they went to greet Arvind Kejriwal on his very first day as the Delhi CM. The protest action was termed “salt-chapati-chillies” dharna to highlight what the daily wage contract workers’ families are forced to subsist on. Instead of listening to the protesting workers, the DTC administration, on the same day, issued a notice threatening the workers with “loss of service, break in service and other disciplinary/ penal action, deduction of wages” etc. In spite of all these intimidations, the workers remained undeterred. 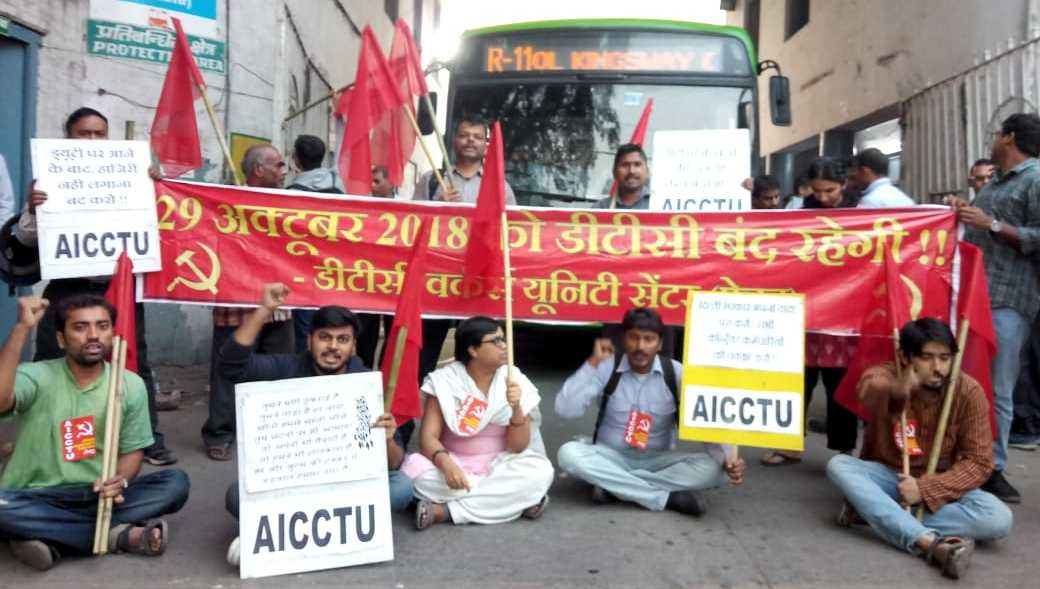 The Delhi Government shamefully went another step ahead and imposed draconian Essential Services Maintenance Act (ESMA) on the striking workers. But the workers of DTC responded heroically to the one – day strike call by DTC Workers Unity Centre and supported by DTC Workers Union (AITUC) and DTC Employees Congress (INTUC). The strike brought to standstill the regular functioning of Delhi Transport Corporation. More than 11,000 contract workers and thousands of permanent workers observed the strike, which affected the entire city. The government in a last minute bid to quell the anger of workers brought out a circular reinstating the wages which were reduced earlier by the DTC management. This indeed is a big victory for DTC workers who were affected badly by reduction of wages. However, the fight is not only about reduction of wages, as Rajesh, General Secretary, DTC Workers Unity Centre said, “We are fighting and will continue to do so for same pay for same work and regularization of contractual workers in DTC.”

The 29th October strike received unprecedented support. All Central Trade Unions other than Bhartiya Mazdoor Sangh (BMS) had supported the call for the strike. Leaders from various unions came out in full solidarity with the striking workers during the entire day. While picketing in different depots of DTC several union leaders were detained and arrested early in the morning. Comrade Prempal Chautela, Working President of DTC Workers Unity Centre (AICCTU) was detained from North Delhi and Comrade Sriraman, Vice President, DTC Workers Unity Centre (AICCTU) along with comrades Chotelal and Harilal from CITU were detained at Harinagar Police Station for picketing in front of a bus depot in West Delhi. Comrade Rajender, Secretary, HMS Delhi, Comrade Mahavir Tyagi, General Secretary, DTC Workers Union (AITUC), Comrade Rajaram Tyagi, Convenor, DTC Workers Union (AITUC) and Comrade H C Pant from CITU were present at various bus depots. Workers from Haryana Roadways who have been protesting against privatisation polices by Haryana’s BJP Government addressed a gathering of striking workers in one of the bus depots. The BJP Government in Haryana imposed ESMA on agitating workers, just like AAP Government in Delhi which did so for DTC employees. Bezwada Wilson of Safai Karmchari Andolan and Rajib Ray of DUTA also expressed their solidarity with the DTC workers’ movement.

The common people of Delhi need DTC to survive in the city; DTC caters to lakhs of people everyday. The DTC workers’ movement is a historic step forward for that. It has not only forced the Government to withdraw its’ anti-worker circular, but also brought forward the pressing concerns regarding safe and affordable public transport in the city of Delhi. The DTC workers’ valiant struggle will continue to remain an inspiration for future fights.