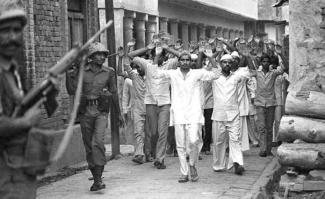 Hashimpura Massacre Proved To Be "Targeted Killing" of Muslims

As daily bread is necessary
So is daily justice.

Like the other bread
The bread of justice must be baked
By the people.
Plentiful, wholesome, daily.

31 years after the custodial killing of more than 40 Muslim young men of mohalla Hashimpura of Meerut city, and three years after the acquittal of all the accused police personnel by a Delhi sessions court, survivors and victims’ families could get a taste of justice. The Delhi High Court held 16 policemen of the 41st Battalion of UP Provincial Armed Constabulary (PAC) guilty of “the targeted killing by armed forces of the unarmed, innocent and defenceless members of a particular community”.

The Delhi HC verdict observed that “A disturbing aspect of the present case is the targeted killings of persons belonging to one minority community… This was a case of targeted killing revealing an institutional bias within the law enforcement agents in this case.”

Justice could be served because the High Court, in a rare use of its special powers, allowed additional evidence (including a General Diary of the police that recorded the names of the members of the PAC platoon that had departed and returned in the same truck which had transported the victims on the day of the massacre) that had been deliberately suppressed by the State of UP in the trial court, to be recorded.

Evidence in the shape of photographs taken by photojournalist Praveen Jain - of the PAC personnel rounding up unarmed Muslim youth at gun point also helped establish the truth. Such journalism is, sadly becoming rare - in an age where star anchors in costume (the latest example being Rahul Kanwal of India Today with CRPF personnel in Bastar) pass off staged shows with armed personnel in conflict areas as “news” and “ground reports.”

A small, stale piece of what Brecht called the “bread of justice” is, of course, welcomed and celebrated by people starved of justice for decades. But this small taste of justice also serves to remind us of the unconscionable delay and endless postponement of justice for the victims of the Sikh massacre (1984), the various communal massacres of Muslims in Maharashtra, Gujarat, Delhi and elsewhere, the Kandhamal massacre of Christians, the massacres of Dalits in Bathani Tola and Laxmanpur Bathe and elsewhere, and the many mass custodial killings, massacres and mass graves in Kashmir.

Since CPI(ML) has experience of closely supporting the Bathani Tola and Bathe victims who filed a petition in the Supreme Court against the Patna High Court’s acquittal of all the accused in those massacre cases, we have seen first-hand how the denial and delay of justice rubs salt into the wounds of survivors and victims’ families. Why does the Supreme Court not feel any urgency to hear the appeal in these cases? Why does it give ‘tareekh par tareekh’ (date after date, to quote a well-known episode in a Hindi film) and simply let the matters drag on? Is ‘justice’ and the judiciary really so blind that she refuses to see the pain of those whose loved ones have been killed in communal or caste massacres? Or does she peek through the blindfold, see the pain, and then look away because the lives of Dalits and Muslims are seen by society and rulers as cheap and dispensable?

Rebecca John, the advocate who represented the victims, said in an interview to Huffington Post, “We must look at each of these cases with compassion, with horror. …After all, we did change the course of some cases in this country because it hurt the people's sentiments, individual cases like Jessica Lal and Priyadarshini Mattoo. Why is that we can't do it for horrific cases of mass violence like this and why is that even today people from Kunan Poshpora, people from 1984, are still waiting for that elusive justice. I think these are questions that judiciary must ask and we must ask as citizens of this country. And as long as we are lackadaisical in our response, these tragedies will continue.”