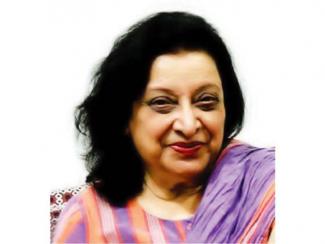 WE salute to Fahmida Riaz, the inimitable feminist poet from Pakistan, who humorously and wryly showed India a mirror in which we could clearly see our communal fascism, saying 'Tum bilkul hum jaise nikle' (You turned out to be just like us).

We have below her poem on Marx, translated into English from Urdu by Raza Naeem.

Neither a messenger’s avatar, nor the guardian of the world
A human like me, with an agitated beard
He too was alive on Earth, it is an ancient tale
He died since long, long time passed, that aged Christian
The cycle of fate remains, pieces of permanent birth
Are dancing in the circle, their faces changing
Everyone is busy, everyone has a life of their own
Every pauper is thinking in the world in his own way
The seeing eyes see, what is going to happen
The fire is beating from east to west
He too stands at some turn of the path
Perhaps he sees how much dust has time spread
I saw this photo a hundred times, but now I stand still
I tremble after biting my lip, when I think for a moment
What a man was born…
So much have you left behind!
Wherever the sun rose tearing the black earth
Men took your name, restless
Time never stopped for anyone as it is, but this too has happened
The flying century stopped for a brief moment to turn, look at you
A human generation has thought about you often
A century has raised its hand to salute you