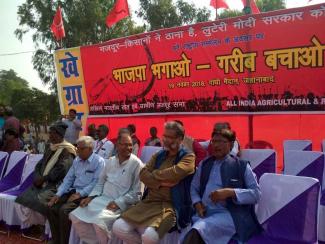 THE All India Agricultural and Rural Labour Association (AIARLA) held its 6th All India Conference in Jehanabad on 19-20 November. The conference began with a massive ‘Oust BJP, Save the Poor’ rally attended by thousands of agrarian and rural workers from Bihar.

The conference was attended by more that a thousand delegates from all over the country who elected a 263-member National Council, 83-member Executive, with Comrade Rameshwar Prasad as Honorary President, Comrade Sriram Choudhury as President and Dhirendra Jha as General Secretary and other office bearers.

For the occasion, Jehanabad was named after the late Comrade Shah Chand, the hall after the martyr Comrade Virendra Vidrohi, and the dais after martyr Comrade Manju. The town was decorated with banners and flags and gates were erected in honour of martyrs and departed leaders including the late AIARLA Odisha President Satyabadi Behera and late AIARLA Tamilnadu President TKS Janardanan. 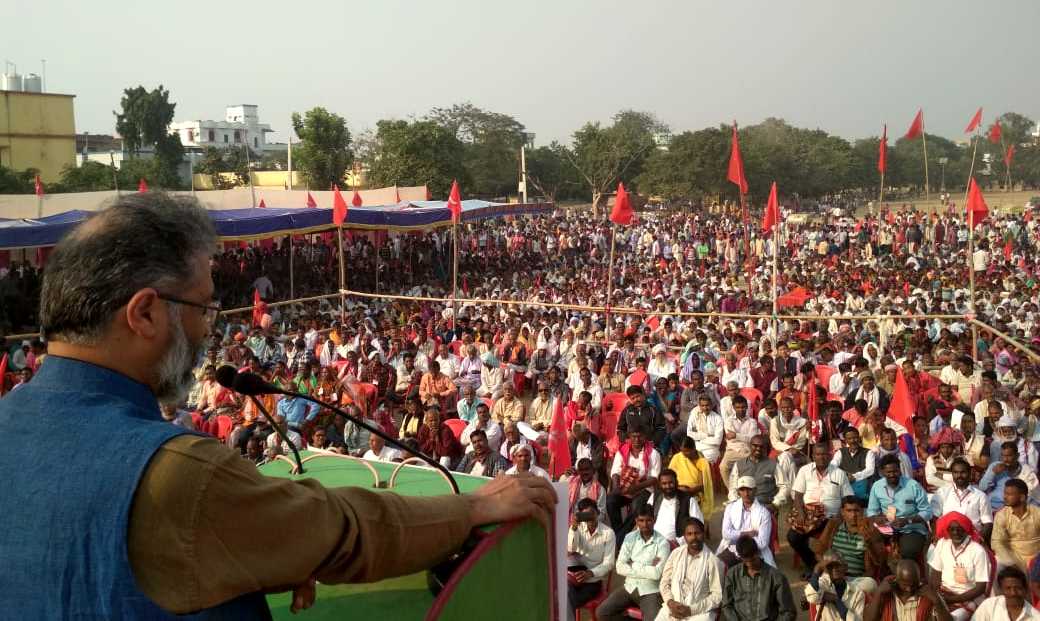 Addressing the rally in Jehanabad, Comrade Dipankar Bhattacharya said that Jehanabad has been the soil for many historic and indomitable struggles of dalits and the poor. This is the soil that has seen the martyrdom of hundreds of comrades including Shah Chand, Manju Devi, and Virendra Vidrohi. The communal-fascist forces had assumed that they could oppress the poor and suppress their voice, but this huge presence of tens of thousands at the Gandhi Maidan today tells us that the struggle of the poor is unstoppable.

The Poor Must Unite To End Mo-Disaster

Comrade Dipankar said that the country’s villages are today resounding with the slogan of ‘Oust BJP, Save the Poor’ because the country has never before seen such an anti-poor government. Laws like MNREGA are being totally made ineffective. Adivasis and rural poor are being evicted from the land. The Food Security Act has been reduced to a joke. Ration is being linked to Aadhaar cards, leading to the poor starving to death. About 60-70 starvation deaths have already taken place in the country.

He said that the Modi government talks of 2022; why do they not talk of today? Today Modi has no answers to our questions, so the BJP is once again fanning communal flames in the name of Ram Mandir, and has given the call to march to Ayodhya on 25 November to build the Ram Mandir.

He said, the disaster that has struck our freedom and our Constitution today is no ordinary occurrence. This government wants to destroy everything; so, the first thing to do is to oust this government from seat of power by building an unprecedented unity among workers, farmers, scheme workers, sanitation workers, and all working people.

The ML General Secretary said that the Constitution was passed on 26 November; all the people in the country got equality and freedom, albeit on paper only. Today our fight is for equality and freedom, on the strength of which we want to realise the dreams of Ambedkar and Bhagat Singh. We shall not allow the BJP’s crop of hatred and lies to be sown and harvested. 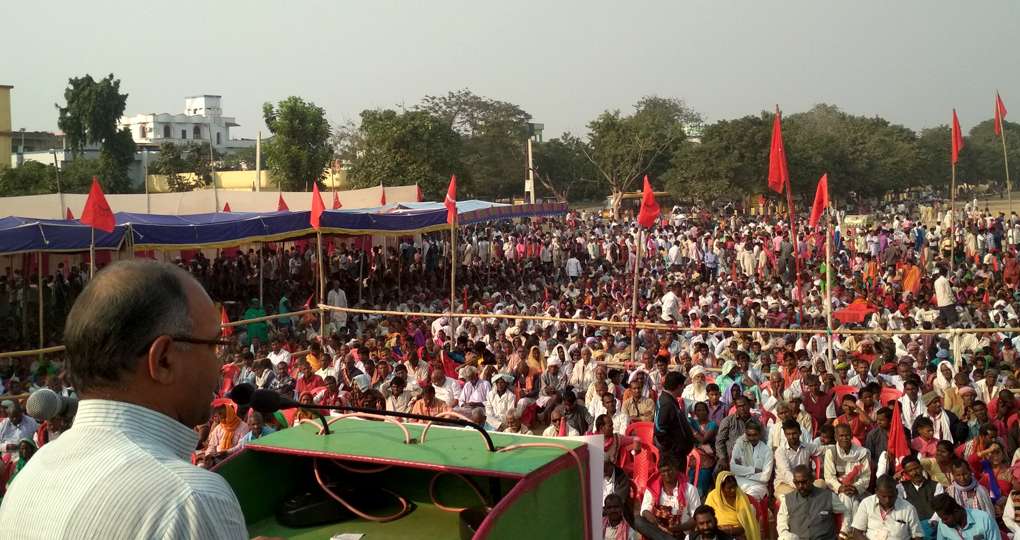 Addressing the meeting, Kisan Mahasabha General Secretary Comrade Rajaram Singh stressed the need for unity among agrarian workers and farmers and said that on 29-30 November we are marching to Delhi and will force the government to bow to our demands. The meeting was also addressed by CPI(ML) MLAs in the Bihar Assembly Mahboob Alam, Sudama Prasad and Satyadev Ram, AIPWA General Secretary Meena Tiwari, State Secretary Shashi Yadav, AIARLA leader Kunti Devi, Mahanand, and other leaders. Shriram Chaudhary, Tirupati Gomango were also present on the dais. The meeting was presided over by former MP Rameshwar Prasad and conducted by Gopal Ravidas.

Earlier, veteran leader Pratap Das hoisted the flag at the Gandhi Maidan and tributes were paid to all the martyrs. Comrade Nirmohi sang a song in memory and honour of the martyrs.

Resist the Regime of Theft, Loot, and Hunger 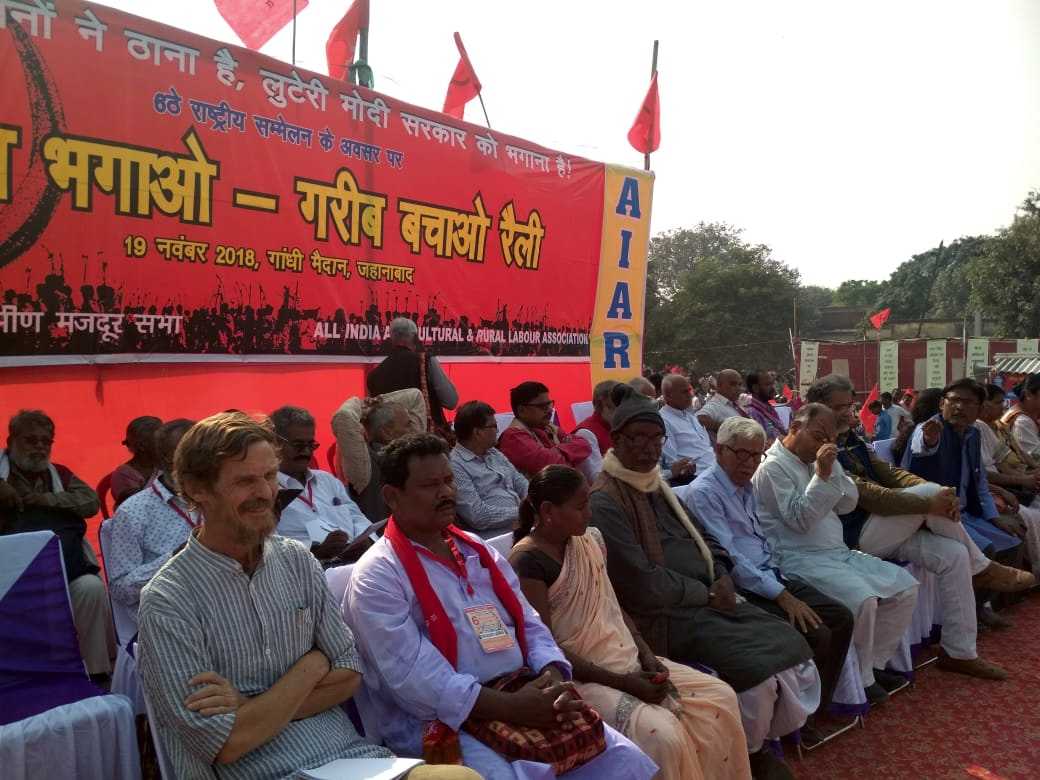 Addressing the open session, Prof Jean Dreze said that MNREGA, Food Security, Public Distribution System (PDS) etc are in the clutches of large scale corruption. The commitment of those in power is not to the common people but to corporate houses. These schemes have gone from bad to worse in the Modi regime, which is why starvation deaths are occurring across the country today. The poor, dalits, and adivasis need food but there are no food grains in their homes. There should be a guarantee of provision at least for two square meals a day. Food security is the most important issue, which is why the Food Security Act was passed. But this Act has been made a joke today. We can and should mobilise the poor on this issue.

Jean Dreze further said that the large scale corruption in the PDS needs to be ended. The food grains meant for the poor are being stolen by a chain of people from the dealer to the powers at the top. Therefore, these middlemen must be removed from these schemes. PDS must be run entirely through people’s participation and autonomy. We must fight for people’s-management not only in PDS but also in the economy. That is the only way to stop theft and loot. But we are being told not to think for ourselves, as that is a very dangerous thing to do.

What The Rural Poor Demand 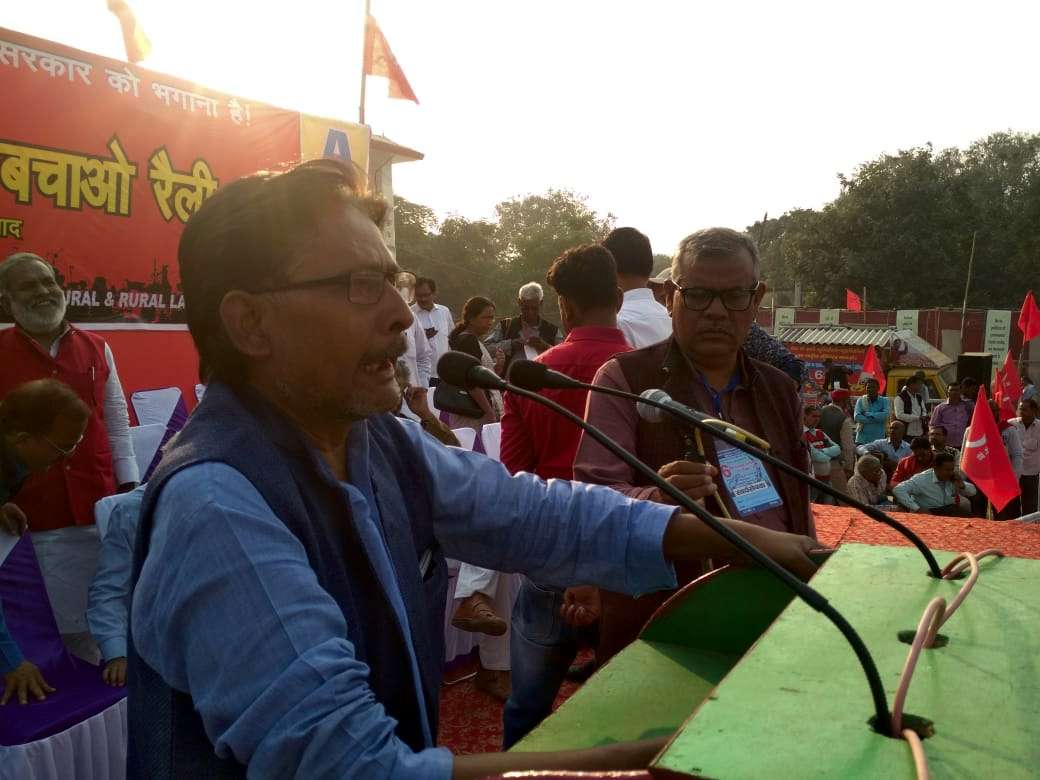 AIARLA General Secretary Dhirendra Jha presented the organisational report on the current political situation. The report condemned the Modi regime, and raised many issues including livelihoods of dalits and workers, homestead land, education, health, attacks on migrant workers, eviction of poor settled for decades on small pockets of land, attacks on the rights of adivasis and forest-dwellers. The report also reviewed the organisational work of the past 3 years and emphasised the need to strengthen the organisation and struggles in all States. The report also raised the issues of demonetisation and its destructive effect on agriculture, the unorganised sector where crores of jobs were lost, the economic ruin of farmers and workers, employment under MNREGA and the conspiracy to fix MNREGA minimum wages far below the minimum wage in the market, unemployment allowance, etc. Many delegates participated in the discussion on the General Secretary’s report and enhanced it by sharing their experiences.

AIARLA has expressed solidarity with and support to the farmers’ protest in Delhi to be held on 29-30 November. The Conference also resolved to participate strongly in the countrywide workers’ strike on 8-9 January 2019 and resolved to throw out the fascist BJP government.

Apart from these, the conference also raised the issues of a central law for the safety and dignity of workers in the country as well as migrant workers, guarantee of ration, livelihood and pension for all, and equal and quality education for children.
The Conference declared a decisive battle against the Modi government at the Centre and the BJP-JD(U) government in Bihar. The people are against communal frenzy, and for the protection of the Constitution, democracy, and people’s rights.

This 6th national conference of the AIARLA was held on the basis of a countrywide membership of more than two million. The Conference also demanded land reforms, government acquisition of Betiya Raj zamindari lands, passing of a new Sharecroppers Act, Constitutional status for the right to housing, and a law for a maximum limit of 2 plots or houses at 2 places in order to confiscate black money and ‘black’ property.