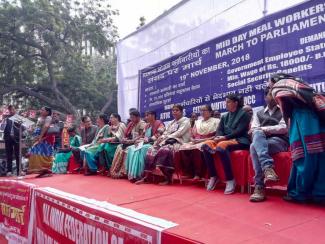 The MDM workers serve a back-breaking job, sometimes more than 8 hours in a day, including the preparation for cooking, distribution of food, cleaning utensils and premises. But it is a matter of national shame that the MDM workers are not even recognized as workers! They don’t get minimum wages; they don’t get any social security benefits. They are paid only 10 months in a year, and that too a meager Rs. 1000/- per month.

Further, the Modi Government has severely cut down the budget of the MDM scheme. The scheme is also brazenly privatized in many states, the government handing it over to corporate houses like Vedanta. Very recently, there was a tokenist increase of the remuneration of ASHA and Anganwadi workers. But there is a deafening silence of Modi Government on the 26 lakhs MDM workers.

This 19th November saw a massive gathering of MDM workers from all across the country at Jantar Mantar to protest against the Modi Government’s inaction and criminal silence over their meagre pay and terribly poor work conditions. Workers from Bihar, Jharkhand, Uttar Pradesh, Punjab, Himachal Pradesh, Uttarakhand, Maharashtra, Andhra Pradesh, and other states participated in the protest, with the strength of their numbers, under the banner of AICCTU and other central trade unions.

At the 19th November Parliament March, the anger of the MDM workers was quite palpable. Reena Devi, mid day meal worker and activist from Palamu, Jharkhand said that they are paid only Rs. 1200 per month. And when recently there was a massive protest by the MDM workers, the Jharkhand police brutally lathicharged them. Manjeet Kaur from Balade Wala village, Punjab narrated how the Government always remains apathetic to the demands of MDM workers and they are paid only Rs. 1800 per month.  Madhuri Gupta, leader of Bihar Rasoiya Sangh (affiliated to AICCTU) said: “Why doesn’t the Government acknowledge us as workers? They always want to intimidate us through threats of retrenchment and anti-worker circulars, one after another. But all these show that they are actually afraid of our movement and our union.”

The MDM workers’ protest gathering was addressed by the central trade union leaders, and also by CPI MP D. Raja and the JNUSU President N Sai Balaji. Saroj Chaubey, from the Bihar Mid Day Meal Workers Union (AICCTU), when addressing the protest meeting said, “The Bihar Government, instead of listening to the demands of the mid day meal workers has been following Modi’s path. The Bihar Government’s apathy towards the MDM scheme is very easy to understand. Nitish Kumar has said that the MDM scheme is lowering the quality of education. But the truth is that the enrolment of children in schools has increased and the drop-out rate has decreased due to this scheme. Recently our union had organised a successful 5-day strike, but there is no difference in the attitude of the central and state governments.”

Geeta Mandal from the AICCTU affiliated All India Scheme Workers Federation said, “In Modi raj, we have seen an all-out assault on the workers. In Jharkhand, on one hand there is loot by BJP and Adani and on the other hand, lathicharge on the women MDM workers. Is this Beti Bachao or Beti Maro? The government only gives Rs. 1200 per month and this is clear exploitation and we demand that a minimum of Rs. 18000 must be given to MDM workers.”

From the protest meeting, a memorandum with the demands of the mid day meal workers was submitted to the Finance Minister, Arun Jaitley. After the daylong protest, a tired but smiling mid day meal worker from East Champaran, Bihar, Comrade Shivkali said: “Today it was only us mid day meal workers. In January, we and all the workers of the country will be on strike. Let’s see what Modiji does then?” 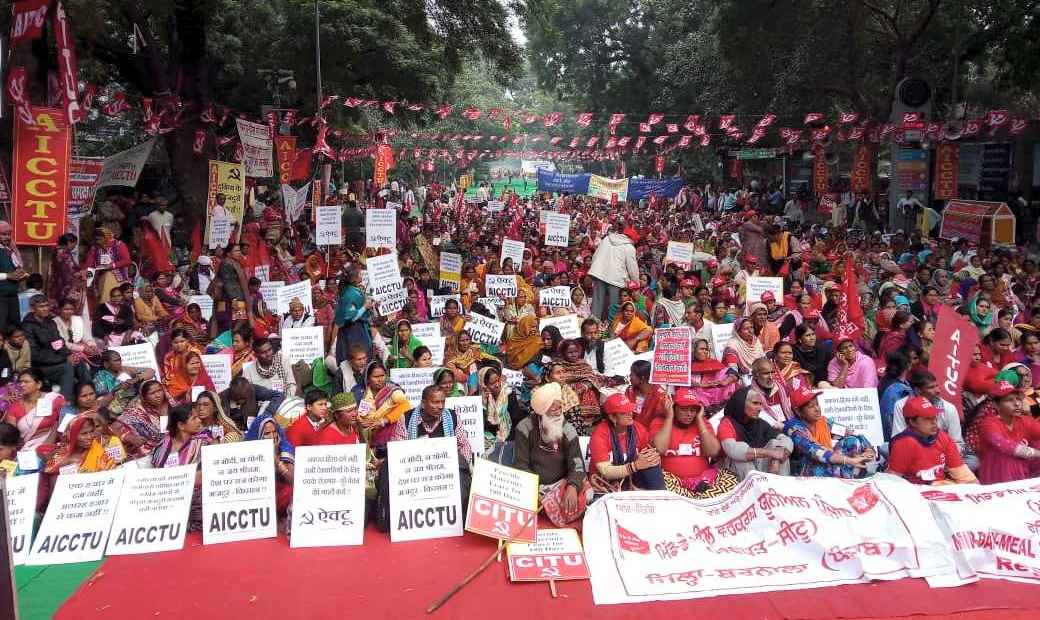 1.   Immediate increase of remuneration of MDM workers to minimum wages Rs.18000 per month.

2.   Implement the recommendations of 45th and 46th ILC regarding scheme workers -

4.   There should be no retrenchment of the existing Mid Day Meal workers. Reinstate Retrenched workers. Issue appointment letters and identity cards to all MDM workers. Make and implement similar service conditions all over the country.

5.   Include children up to 12th standard in the Food Security Act and accordingly extend the Mid Day Meal Scheme to cover all the schools. Appoint minimum two Mid Day Meal Workers in every School.

6.   Proper infrastructure including kitchen sheds, storage place and safe drinking water should be provided in all schools. Cooking gas must be made available for cooking food. The cost of cooking and vegetables should be increased to a minimum of Rs. 25/- per child per day.

8.   180 days maternity leave with pay should be provided to the Mid Day Meal workers.

9.   For redressed for grievances constitute grievance redressed committees at state and district levels.

10.   Provide 2 dresses per year and washing allowance to MDM workers.

11.   Provide adequate budget allocation for MDM Scheme
12. No Privatisation of the MDM Scheme in any form. No centralised kitchen in MDMS.