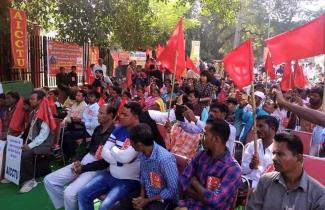 Just days back, two young sanitation workers from Bihar, Vikas Paswan and Dinesh Paswan, died from toxic gas asphyxiation while cleaning the sewage tank in Prime Minister Narendra Modi’s constituency Varanasi. Sewage tanks in that area were being linked with the Dinapur sewage treatment plant which Modi inaugurated just two days after these horrendous killings. Not a single word came from the Prime Minister about the young workers suffocated to death! Is this his idea of “Swachh Bharat”?

Thousands of workers have similarly lost their lives in manholes, septic tanks and in treatment plants through all these years. These are not accidental deaths but institutionalized murders by the state – private contractors’ vicious nexus. At least 1,500 to 2,000 deaths per year have occurred during sanitation work across the country, solely due to apathy of officials in providing protective equipments and minimal safety measures to the workers. Thousands of workers are forced into manual scavenging to clean manholes, septic tanks and sewage treatment plants. Modi’s Swachh Bharat program doesn’t even attempt to enforce the law forbidding manual scavenging – instead, by encouraging the building of toilets with septic tanks, essentially perpetuates manual scavenging!

But sanitation workers across the country are fighting back! On 16th November, hundreds of sanitation workers from all over India held a National Convention at Jantar Mantar, Delhi. Sanitation workers from the states of Bihar, Karnataka, Tamil Nadu, Chattisgarh, Odisha, Uttar Pradesh, Delhi and other states participated in the Convention, sharing their massive anger against the Swachh Bharat photo-op and talked about their continuous fights for labour rights and dignity.

Bhasha Singh from Safai Karmachari Andolan and noted journalist, and Comrade Dipankar Bhattacharya, General Secretary of CPI-ML also addressed the National Convention of Sanitation Workers. Bhasha Singh congratulated AICCTU for organising this convention and bringing forward the issues and demands of sanitation workers to the forefront. Comrade Dipankar highlighted the anti-workers policies of Modi Government and how Swachh Bharat is nothing but Modi’s brazen attempt to advertise himself. Comrade Clifton D'Rozario presided over the convention and reiterated that we must fight to end contractual system, for equal pay for equal work, for safety equipments – but also to end the casteist inhuman practice of manual scavenging.

The National Convention ended with a resolution to expose the Swachh Bharat rhetoric of Modi-led BJP government by undertaking an extensive campaign all across the country in various forms, including conventions, rallies, gherao of MPs, etc., at various levels. The convention also declared its full support of and participation in the All-India strike against Modi Government’s anti-worker policies scheduled for 8th and 9th January 2019.

In the national convention, the sanitation workers across the country, with the strength of their numbers, expressed their pain, sufferings and appalling working conditions. But they are also determined to fight back the cruel hypocrisy of Modi’s Swachh Bharat jumla. As Comrade Rangamma, a sanitation worker and activist from Bangalore said it loud and clear: “Mr. Modi, you pose wielding a broom for drama and vote, and we do it for real! And we are going to teach you lesson!”

Resolution Adopted at the Convention

Today hundreds of sanitation workers employed in various urban local bodies, public sector undertaking and private companies from various states held the National Convention on Sanitation Workers, under the banner of All India Municipal Workers Federation (AIMWF) and All India Central Council of Trade Unions (AICCTU) and have unanimously resolved as below.

The Convention pays homage to Shri Vikas Paswan and Shri Dinesh Paswan, two young sanitation workers who died on 10th November 2018 from asphyxiation while cleaning the treatment tank in Varanasi, which was inaugurated by Modi yesterday.

Thousands of workers have similarly lost their lives in manholes, septic tanks and in treatment plants over all these years, and the Convention resolves that these are not accidental deaths but institutionalised murders by the State.

That at least 1,500 to 2,000 deaths per year have occurred during such work across the country, solely due to apathy of officials in providing protective equipment and minimal safety measures to these workers.

That thousands of workers forced into manual scavenging to clean manholes, septic tanks and sewage treatment plants have lost their lives. Those that survive are compelled to continue with this work which is undignified, unhealthy, and carry severe risks to life.

That the Municipal workers across the country, for the past several decades, have been fighting for payment of better wages, regularisation of their services and dignity of work and have been raising the sorry plight of sanitation workers.

That most policy interventions towards improving sanitation have focussed on building toilets, but no focus on the systems to dispose off the human waste, and the Swachh Bharat Abhiyan is institutionalising the practice of manual scavenging.

That the Swacch Bharat Abhiyan exposes the deeply entrenched – and deeply casteist – approach to waste/garbage/sewage management and manual scavenging.

That in the name of Swachh Bharat, people are being denied their right to live and right to privacy. Officials are shaming those defecating in the open by blowing whistles, denying ration from the public distribution system and arresting offenders under various sections of the Indian Penal Code. Comrade Zafar in Rajasthan was killed by the same forces when he objected to government officials’ highhandedness and sexual harassment of women instead of fulfilling the long term demand of constructing toilets in the locality and the Convention condemns his murder and demands that the guilty officials be brought to book.

That the Swachh Bharat campaign is nothing but another of Modi’s jumla especially since no sanitation campaign in India can be successful unless it addresses the issue of untouchability. Any mission that wishes to make an impact in terms of cleanliness and sanitation should fight against the most retrograde idea of pollution and purity, which is the hallmark of the Hindu caste structure. In this backdrop the Convention condemns the Modi-led manuvadi BJP government which is institutionalising manual scavenging and caste division through Swacch Bharat Abhiyan.

That lakhs of workers, predominantly Dalit and mostly women, are employed as manual scavengers for the removal of human excrement from public streets and dry latrines, and for cleaning sceptic tanks, gutters and sewers, and as part of the workforce for “housekeeping” still cleaning toilets in factories, offices, malls and even airports.

That only a small fraction of sanitation workers are formally recognised, and most are contract and other irregular workers who are denied even minimum wages, weekly off, holidays, and any social security benefit.

That most sanitation work is predominantly done by Dalits. Society and governments have made it their caste ordained occupation over which they have been handed the monopoly is the cleaning of latrines and toilets and handling human excreta. This monopoly has survived for centuries and persists even in the so-called modern era.

That one of the most essential and radical steps in the struggle for justice for the workers is the struggle against caste system – the annihilation of caste – as part of the practice of class struggle.

That the Indian Railways is the largest employer of manual scavengers, employed almost entirely on contract labour, to clean the human excreta off the railway tracks at stations.

That the Governments must ensure compliance with the judgment of the Supreme Court in Safai Karamchari Andolan and Ors vs. Union of India and Ors [(2014) 11 SCC 224] directing immediate survey and identification of manual scavengers; rehabilitation of manual scavengers by providing one-time cash assistance, scholarship for their children, allotment of a residential plot and financial assistance for house construction or a ready-built house with financial assistance, livelihood skill training to at least one member of their family with monthly stipend during such period and subsidy and concessional loan to at least one adult member of their family for taking up an alternative occupation and the payment of Rs. 10 lakhs compensation to the family of all persons who have died in sewerage work (manholes, septic tanks) since 1993.

That the two laws enacted by Parliament - the Employment of Manual Scavengers and Construction of Dry Latrines (Prohibition) Act, 1993 and the Prohibition of Employment as Manual Scavengers and their Rehabilitation Act, 2013 – are totally inadequate and have had little or no impact in addressing either the existence or the nature of this practice due to its poor implementation.

That we salute the gallant struggles and sacrifices of Municipal Workers Unions for union recognition, increased wages, housing and latrines, free medicine and treatment, end to corruption of the mafia that controlled their jobs, annual casual leave, and paid leave for a month per year.

The eradication of Manual Scavenging and the emancipation of Dalits from this caste-Based Discrimination!

That the contract system must be scrapped and all workers regularised, and payment of a minimum wage of Rs. 26,000/- must be declared immediately.

That the Government must introduce Modernisation and full fledged Mechanisation in Sanitation Operations.

That in light of the all-out assault on the working class by the Modi Government, the Convention declares it full support of and participation in the All-India strike scheduled for 8th and 9th January 2019.

That the national convention resolves to expose the Swachcha Bharat rhetoric of Modi led BJP government by undertaking extensive campaign all across the country in various forms, including conventions, rallies, gherao of MPs, etc., at various levels.

In Karnataka, after a long struggle of 15 years, the employment of sanitation workers through contractors ended. Now the Municipality directly employs sanitation workers. When we started, the sanitation workers’ salary was a meager Rs. 1500/-. We ensured the P.F. and ESI facilities for all workers and Rs. 15000/- salary per month. But today sanitation workers still have to face caste discrimination and stigma, and sexual harassment and our struggle for dignity of the workers is continuing.

Modi’s Swachh Bharat is limited only in big banners and posters. What have we got? We get payment of only Rs. 6, 000/-. We have to work without boot, gloves and mask. If you want to get boots for sanitation work, you have to pay from your own pocket. There is no modernisation of machines. The Government spends so much on Swachh Bharat advertisements, why nothing on our basic necessities?

The struggle of the sanitation workers in Jawaharlal Nehru University (JNU) began when we refused to dispose carcasses of animal and enter the sewers. Our union took a firm stand that we were not going to do these works, and the JNU administration was forced to backtrack. When a sanitation supervisor was thrown out after she took few days leave because of pregnancy, we unitedly fought back and continued our protests in administration block for 15 days. After that, she was taken back and we ensured the provision of maternity leave for all workers in the campus. We have also lost our co-workers who were severely unwell and forced to continue work in terrible conditions. But the fight will go on.

I have been working as a sanitation worker for more than 25 years. We don’t get any medical facilities. I have lost several of my co-workers in sewers whose bodies were not even recovered. And what is this drama of Swachh Bharat? It is only politicians and industrialists taking photo. Modi and Yogi actually don’t care about our lives!

In May 2017, two workers of Patna Municipal Corporation, Jitendra Paswan and Deepak Choudhury, were suffocated to death while they had gone inside a manhole to clean it. The Municipal Corporation does not provide safety equipments to sanitation workers for cleaning inside manholes. All safety regulations are blatantly flouted. But our union fought back and ensured compensation and permanent jobs for the family members.