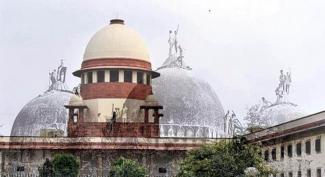 TWENTY seven years ago modern India had witnessed a shocking spectacle of vandalism. Cheered by senior BJP leaders LK Advani, Murli Manohar Joshi and Uma Bharati, and empowered by the patronage provided by the BJP government of Uttar Pradesh led by Kalyan Singh, an organised mob of vandals demolished a sixteenth century mosque in Ayodhya in broad daylight. The demolition was watched live on television by the whole country even as the police looked away. The mosque had been built by Mughal emperor Babar, but the Sangh brigade claimed the site as the birth place of Ram and whipped up an orchestrated frenzy insisting on the construction of a grand Ram temple right in place of the mosque.

Twenty seven years since that dastardly demolition, the perpetrators are yet to be brought to justice. But meanwhile the demolition brigade, which had been periodically tasting power since the early 1990s, has solidly entrenched itself in state power and predictably the apex court has now chosen to decree in favour of a Ram temple on the site, offering as compensation an alternative site for the construction of a new mosque. If the December 1992 demolition act was shocking enough, the November 2019 Ayodhya verdict of the Supreme Court has been even more so. On 6 December 1992 it was a mob of vandals that defied the Supreme Court. This time round, we had a five-member-bench of senior Supreme Court judges overturning the tenets of justice.

Rarely does one come across a judgement which cites facts and states principles only to assert a contrary conclusion that stands in glaring contradiction with all those facts and principles. Thus we were reminded how the conspiratorial placement of the idols in 1949 desecrated the mosque and robbed Ayodhya Muslims of their legitimate right to offer prayers in the mosque and how the demolition of the mosque constituted a brazen violation of the rule of law, yet the Supreme Court threw its weight behind completing the process that had begun in 1949. The judgement tells us that the case is a title suit concerning the land and that it must be decided on the basis of evidence and not faith, and then goes on to add an addendum to highlight the importance of the disputed site in the realm of faith!

The biggest difference between December 1992, the moment of physical demolition of the Babri mosque, and November 2019, or the hour of juridical demolition, can be seen in the palpably different popular reaction to these two shocking incidents. In 1992 there was widespread disbelief and anger among common Indians at large, not to speak of the deep sense of alienation among Muslims, but this time round the public response has been strikingly muted. This is not difficult to understand in the given context where the alienation of India's largest minority has only deepened, and the dominant media has become shockingly partisan and majoritarian and the state and the Sangh brigade has unleashed an all pervasive reign of terror, incriminating and silencing dissent in every sphere.

The Sangh parivar was pretty confident in anticipating the pro-temple nature of the verdict and we therefore found the RSS, VHP and BJP leaders all appealing for 'calm'. The same people who were most vocal in their open condemnation of the Supreme Court verdict in the Sabarimala temple entry case, were now out in support of the Supreme Court all through the run-up to the verdict. While the Sangh brigade is celebrating the Ayodhya verdict, unfortunately, the opposition has also by and large chosen to echo the BJP line. The Congress is in fact competing for credit with the BJP, and even sections of the Left are lauding the verdict as a step towards reconciliation. But can there ever be reconciliation without justice?

The verdict may signify a legal conclusion to the dispute, but certainly not a comprehensive or fair closure for the country to move on. For reasons best known to it, the apex court has disregarded the more recent and evident crimes of 1949 and 1992 and based its verdict on the basis of the alleged lack of evidence of exclusive Muslim control over the mosque prior to 1857. This is adding insult to injury and the compensatory gesture of allocation of five acres of land in a nearby site can by no means heal this compounded wound. By entrusting a secular state with the responsibility of founding a trust for the construction of a temple in the disputed site, the court has also contributed to the hollowing out of the lofty ideas enunciated in the Preamble of the Indian Constitution. All this may appease the so-called collective conscience which the Supreme Court had ominously invoked while confirming the death sentence for Afzal Guru against all norms of natural justice, but for India's beleaguered Constitution, this is yet another body blow.

Ayodhya was and remains a crucial test for India's evolution as a secular democracy. Overcoming the traumatic tragedy of Partition, after 1947 India adopted the Constitution and embarked on its journey as a modern democratic republic. The RSS, we must remember, did not merely stand away from the freedom movement, it actively conspired against the very vision of a modern secular democracy. The assassination of Gandhi - the plot was actually to eliminate a group of key leaders - and the clandestine installation of idols in the Babri Masjid were two typical post-Independence acts that bore the stamp of the Sanghi design to derail the fledgling republic. The incompatibility of the RSS with the idea of a secular democratic India compelled India's first Home Minister, none other than Sardar Patel who Modi so desperately seeks to appropriate, to ban the RSS soon after the Gandhi assassination.

Today the Sangh-BJP establishment is bent upon executing its failed design of the 1940s. Key policies, the economic and foreign policies in particular, have already been reversed to negate every aspect of India's aspiration to assert the economic sovereignty of the country. The combination of NRC and Citizenship Amendment Bill threatens to rewrite the basic terms of our Constitution and citizenship. The Ayodhya verdict fits in perfectly with this ominous design, fructifying a seventy-year-old conspiracy. The criminal demolition of a mosque and its court-ordained replacement with a temple is intended to assert the rise of a Hindu Rashtra within the formal constitutional shell of secular India. Secular democratic India has lost the legal battle of Ayodhya, rather than covering up this defeat as reconciliation and peace, we must focus on winning the protracted war of democracy with renewed determination.