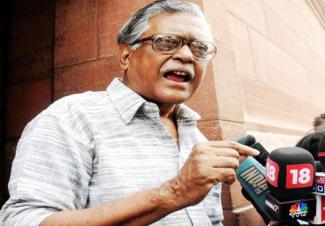 Veteran trade unionist and CPI leader Comrade Gurudas Dasgupta passed away at the age of 83. He passed away on on October 31 - the day of 100th anniversary of the founding of AITUC of which he remained General Secretary for almost 17 years since 2001.

Born in Barishal (now in Bangladesh) Comrade Gurudas joined the CPI in his teens in 1952, though his family supported the Indian National Congress. In 1958 he became the president of the Bengal Provincial Students’ Federation (BPSF). From 1967 to 1977 he was a member of the West Bengal Committee of All India Youth Federation.

During the Emergency, Comrade Gurudas showed the ideological clarity and moral courage to actively resist the CPI’s decision to back the Congress and support the Emergency. He did so even as he remained a staunch CPI member. He was one of the earliest to warn that the Congress’ neo-liberal policies would pave the way for the rise of the far-right in India.

He played a pivotal role in organizing Bank and Insurance employees, apart from other sections of workers. He was a fine Parliamentarian, raising issues of workers and people inside Parliament with skill and humour. As an MP, he exposed the financial scams of the Nicholas Piramal Group and achieved a Parliamentary probe into the illegal operation of the Bailadila Coal Mines in Chattisgarh, which helped win the CPI lasting support in South Chhattisgarh. He was known for his crusade against black money and scams.

As befits a Communist MP, Comrade Gurudas always lived a simple life, and was involved with workers’ movements till the very last.