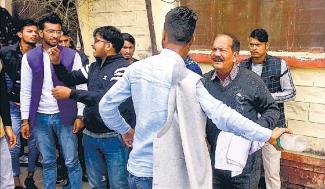 DIPAK Upreti of ABVP, the students’ union president in Almora campus of Kumaon university doused petrol over the campus director Prof. RS Pathni and Prof Daya Pant on 15 November when Prof. Pathni was talking to them regarding some demands of the students’ union. This ABVP leader spilled petrol over himself too supposedly to press for whatever demands they were negotiating. Such dramatized acts of threatening, intimidation and even self immolation threats are not new in that particular stream of student politics which represents ruling parties and government policies. They try to dramatise and depoliticise the serious discourse concerning genuine student community. This is same brand of student politics which thrives on money and muscle power and on the backing of ruling party politicians. In fact they are sponsored by such politicians and power lobbies who in turn use them as bargaining tools for their vested interests.

What is more worrying in this incident was the fact that the so called student leader threatened to kill his own teachers. This cannot in anyway be bracketed within any type of student activism, and police rightly arrested him under criminal sections including charges of attempt to murder under IPC section 307. The next day many teachers in Almora campus assembled together to condemned this incident and demanded security for Prof RS Pathni. They also raised their collective concern regarding safety and hooliganism inside the campus. Many non-teaching staff also came to their support. But this wasn’t going to be so smooth for the teaching community.

The Vice Chancellor of Kumaon University the very next day removed Prof. Pathni from the campus directorship and appointed another teacher. In a couple of days the ABVP leader got bail from the sessions court, although to get bail in an attempt to murder case is considered to be tough if not impossible. Prof Pathni under pressure is now on leave while the said ‘student leader’ is roaming freely, inside the campus too. There is BJP government in Uttarakhand and many ministers and senior BJP leaders are coming openly to support their ‘cadre’ while the professor who only did his duty is now under stress. The student leader has not even been suspended from the college or university for this act.

While a teacher is being victimised for nothing, the deputy chairman of Uttarakhand Vidhan Sabha, BJP’s Raghunath Singh Chauhan has asked his party’s minister for education Dhan Singh and the concerned senior officers in administration and police to remove criminal sections from the FIR filed against ABVP leader saying students are fighting for their demands and its not a crime. Even dousing his teacher with petrol and threatening to kill him is not a crime.

This is same BJP which is adamant to destroy JNU and its excellence by filing FIRs under various criminal sections against very peaceful, innocent and decent students of this eminent institution! Even in Kumaon University in BJP-ruled Uttarakhand, where the whole administration is under the BJP rule it would not have been so difficult for Deputy Chairman of Vidhan Sabha and the education minister to heed the demands of the students in Almora campus. Why attack the teachers for the failure of the Government, if not to divert attention from the real culprit, the BJP Government?

Many teachers in Almora campus came in support of Prof Pathni and expressed their solidarity the very day he was removed. Many teachers met on 18 November and offered to resign from various administrative posts they had been assigned by university in protest. DSW Prof DS Bisht and many other teachers sent their resignations from their administrative responsibilities.

The University VC has meanwhile set up an “investigation committee” but has asked the said committee to declare the whole incident to be a “misunderstanding”, and to “resolve” the “misunderstanding” between students and teachers! In JNU, a students’ movement against fee hike, supported by teachers, is branded criminal and subjected to FIRs by the BJP regime and its pet VC – but in Kumaon University, an ABVP thug’s attempt to burn teachers alive is a mere “misunderstanding”!

This action of the Vice Chancellor testifies to his pro BJP leanings, and make things worse in establishing an environment for just, rational and democratic discourse within university. This became evident when a member of the Executive Council of Kumaon University, Kailash Chand Joshi, asked the VC through a memorandum to reinstate prof Pathni in director’s office and to ensure safety of teachers and non-teaching staff in the university. He also reminded the VC of earlier incidents of this kind of hooliganism where university VC did not take any exemplary action so that a repeat of such incidents may be stopped. Mr. Joshi said that such criminal incidents are deteriorating educational atmosphere and academic standards of this reputed university.

CPIML state secretary in Uttarakhand Raja Bahuguna said that there has been a glorious history of vibrant and sensitive students’ politics that addressed many important social issues and concerns inside the Almora and Nainital campuses. But now the state government and university administration is openly encouraging anarchy and criminalisation of student politics which is nothing but a concerted attempt by RSS to kill voices of reason and serious concerns towards the society. He demanded a judicial inquiry into whole incident, and also demanded that the Uttarakhand Government and Kumaon University Administration must address all the genuine concerns of students while punishing violence by the ABVP leader.