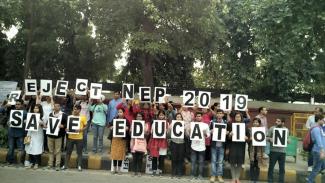 IN a country marked with sharp inequalities of various kinds (class, caste, gender and many others), it is in education that many see a ray of hope, a hope to be able to lead a life of dignity. Right to life is incomplete if the life guaranteed is a life without dignity, equality and justice and it is impossible to imagine these in the absence of equal access to information, knowledge, knowledge construction and skills needed for dignified sources of livelihood. In other words, it is impossible to imagine these in absence of equal access to education. Therefore, it is a tragedy of our times that affordable quality education is a right and must be ensured for all, requires convincing. It is nothing but an absolute tragedy that of all the possible uses of the taxpayers’ money, it is the expenditure on quality public education that is sought to be made a mockery of by the elite and the media alike.

The battle that is being fought in Jawaharlal Nehru University (JNU) today is a battle to resist the attack on equal access to education and on the right to life with dignity and equality. The fight JNU students and teachers are fighting today, is not a fight to save themselves a few hundred or thousand rupees, they are fighting to ensure that education in an institute that has been internationally recognised for its quality of research and academics, remains accessible to all.

The battle for affordable quality higher education becomes particularly relevant in a country where the schooling system is characterized by multiple hierarchies (between private and government schools and also within the different kinds of government schools). Our schooling systems, far from bridging gaps between the privileged and the marginalised, have only served to further intensify them. The Right to Free and Compulsory Education Act (2009), by keeping the better quality government schools like Kendriya Vidyalayas and Sainik Schools outside its ambit, ensured that the ‘Act’ remained weak. The result of this unequal schooling system has been that only those with resources can afford quality schooling and it is the ones without resources and voice who are condemned to the lowest rung of government schools that frequently lack academic infrastructure, including sufficient numbers of qualified and trained permanent teachers. It is this state of government run schools that force parents to opt for private high fee paying schools, even when they are pushed to go beyond their means. Many of us who grew up in middle class families have witnessed our parents’ struggle to fund our  school education because ‘free’ government schools lacked quality, quality government schools lacked enough seats to accommodate us all and the only option that remained were the high fee charging private schools. The flourishing of the latter required a systematic destruction of the public schooling and the saga is all set to repeat at the level of the higher education.  To breathe life into the Lovelys, Amitys, Ashokas and the yet to be born Jio Institute, the public higher education needs to be smothered and killed.

And it is important to remind ourselves who suffers when public higher education institutes are smothered and killed. In past few days, we have heard of several narratives emanating from JNU campus of students who would not have dreamed of being in higher education had it not been for the affordability of JNU. From the children of agricultural labourers, security guards, scheme workers to the children of the very jawans and police personnel (against whom some would want to pit the students fighting for educational rights of all), they all could aspire and realize the dream of a world class education because there existed an equal space like JNU.

The affordability of tuition fees, hostel fees and also of the dhabas around ensured that learning was never left to the classroom alone and intense debates/ discussions spilled over to the community built around those classrooms where (in) ability to afford never became a barrier in participation or in an opportunity to learn from one another. JNU is not just a higher education institute that provides quality higher education to all, it is a space that pricks the bubbles of privileges and entitlements and forces those who come here to acknowledge and confront the same. An equal space where they paid the same fees as anyone else and hence had the same claims to the academic space and its infrastructure as anyone else did! By charging the same low fee, the space didn’t encourage any entitled souls to feel that their claim to the space was more, rather the equal conditions of all and presence of all is what also over the years has led to humanising of most. It is no coincidence that students of this university have been at the forefront of several socio-political. For example,  it was the students of JNU, who by coming out in huge numbers in the winters of December 2012, forced the government of the day to revisit anti-rape laws and make them more gender just. They have been part of movements against forced displacements and land acquisitions, corruption, caste based oppression and many others. The diverse and inclusive space that JNU is and the nature of interactions and exchanges that such a space facilitates, does make it difficult for even those coming from privileged locations to stay in cocooned and rose-tinted worlds where ‘self’ and ‘self interests’ rule. 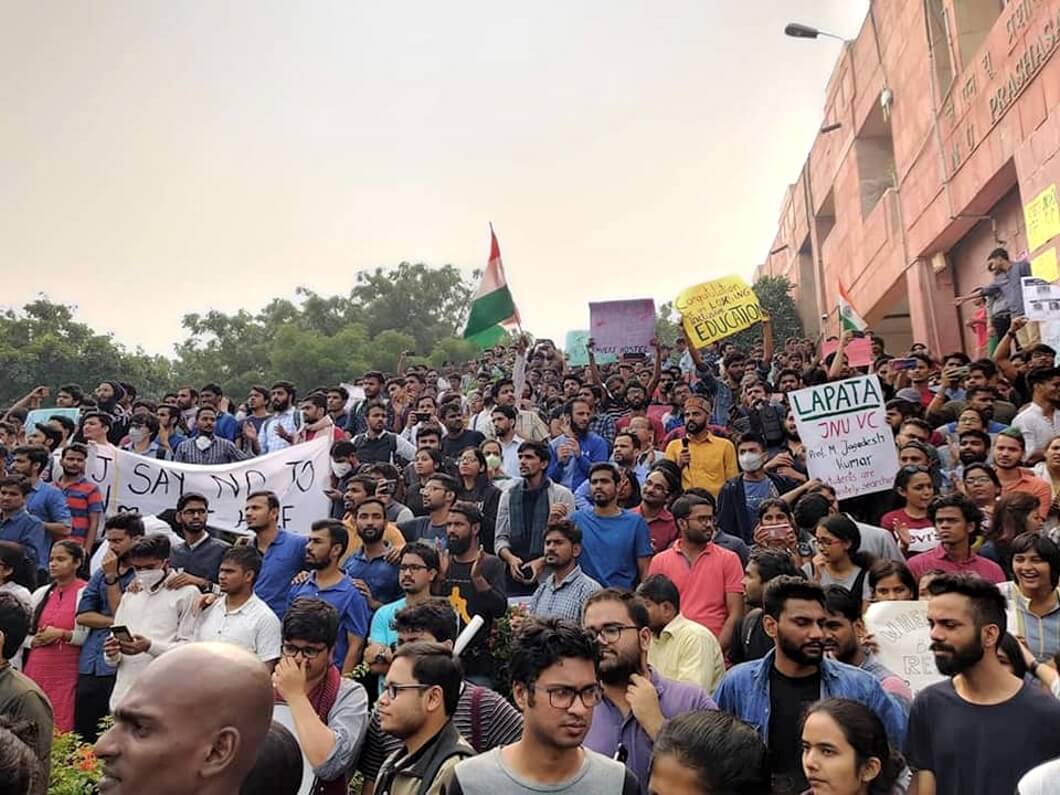 With JNU being a research university, the question is not merely of access to knowledge, but importantly of access to participation in knowledge construction. ‘What will be the idea of development and who would be considered inconsequential enough to bear the collateral damage of the same’, ‘who will write the history and whose story will the history textbook render invisible’, ‘who will write textbooks on sociology and which genders will find a voice in those textbooks’, ‘what agricultural equipments will students of mechanical engineering create and which class of farmers will these inventions help the most’, ‘whose and what kind of labour will economic models consider worthy of wages’…  let alone the answers to these questions that university spaces researching in these disciplines may provide, the very asking of these questions depends on who gets to research in the universities.

A university space where the fee is a deterrent for most, questions of the marginalised and oppressed will forever remain unarticulated and not just the space but even disciplinary knowledge will remain impoverished, shallow and exclusionary. The idea of JNU as an equal space also comes from the fact it has been an equal space where everyone paid the same fees as anyone else and hence had the same claims to the academic space and its infrastructure as anyone else did!! By charging the same low fee, the space didn’t encourage any entitled souls to feel that their claim to the space was more, rather the equal conditions of all and presence of all is what also over the years has led to humanizing of most.

It is also important to remember here that one enters research only after completing undergraduate and postgraduate degrees (something most media channels may never bother to point out, as they comment on the age of research scholars in universities). This implies that there is a huge opportunity cost involved in pursuing research. I entered the M.Phil. programme of JNU after finishing my Masters, at the age of 25. I was in a huge dilemma at the time. I knew my heart lay in research but most of my friends and acquaintances my age had begun to earn. Yes, the thought of depending on my parents for fees when my father was nearing retirement and while friends my age were earning, was very troubling. At the time, the fact that the fee in JNU could be covered by the UGC fellowship was a huge motivator. It helped me pursue my interest in research, ask the questions that had been echoing within me and contribute to my discipline by way of my findings. Not to forget, I currently teach in a university— a research degree is a pre-requisite for teaching in universities, and when the opportunity of entering research degrees is denied to most, also denied to them is the opportunity to enter university spaces as teachers. Hence exclusion from opportunity to research implies exclusion from asking your questions, enriching the knowledge domain and also be denied a chance to teach. Pushing us back to times where the privileged taught the skills reserved for the privileged to the privileged.

A democracy is not a democracy if the access to knowledge and knowledge construction is not democratised. A nation can barely progress if ignorance rules and information and skills are confined to becoming privileges of few. And hence, the fight of JNU students today, is a fight we must all be strengthening and cheering. It is a fight for all of us.