ON November 18, the police and CRPF, many of them in plainclothes, repeatedly brutalised JNU students who set out from their campus to march to Parliament to protest fee hikes and commercialisation of hostel facilities. They arrested several lots of JNU students and detained them in police stations across Delhi.

But there were still thousands of students remaining, making their ways through the Munirka alleyways and various lanes and by-lanes, forcing the police to collect their barricades and try and keep pace with them. So, thousands of students waited at Jor Bagh, not far from the prime minister’s residence, demanding the release of their colleagues, and demanding that the JNU students union find representation in the committee constituted by the Ministry of Human Resources Development to address the JNU deadlock.

When the students finally dispersed from Jor Bagh and began walking back to the campus, they suddenly found the street lights switched off. Under cover of darkness, the police launched a final round of assault. JNUSU Councillor, Shashi Bhushan, a history student who is visually challenged, took off his dark glasses to tell the police he could not see. But they knocked him down and kicked him in the stomach with their boots, saying, “If you’re blind why did you participate in the march?”

The very fact that the Delhi Police, controlled directly by India’s Home Minister and PM Modi’s bestie, Amit Shah, attacked the students under cover of darkness shows that the regime waging war on students knows it has lost all claims to moral authority.

Some of the students I met in the Badarpur police station earlier that day were absurdly young. One young woman was just 17 years old, a BA student, nursing an arm swollen from being assaulted by a policewoman. What makes these first-year students come out on the streets to face vindictive punishment and violence from their Vice Chancellor, and from the police and paramilitary? Most of them are not communists or Left activists, though many of them are.

The Right to Study

When I was a student in JNU in the 1990s, the AISA slogan—‘Struggle to study, and study to change the world’—appealed to my sense of duty and drew a very private, studious me into a public life of activism. The problem is that today, those who rule us brand young people seeking to change the world, “anti-national”, “Urban Naxal” and so on. Much of the media amplifies this noisy abuse, and drowns out the voices of reason. 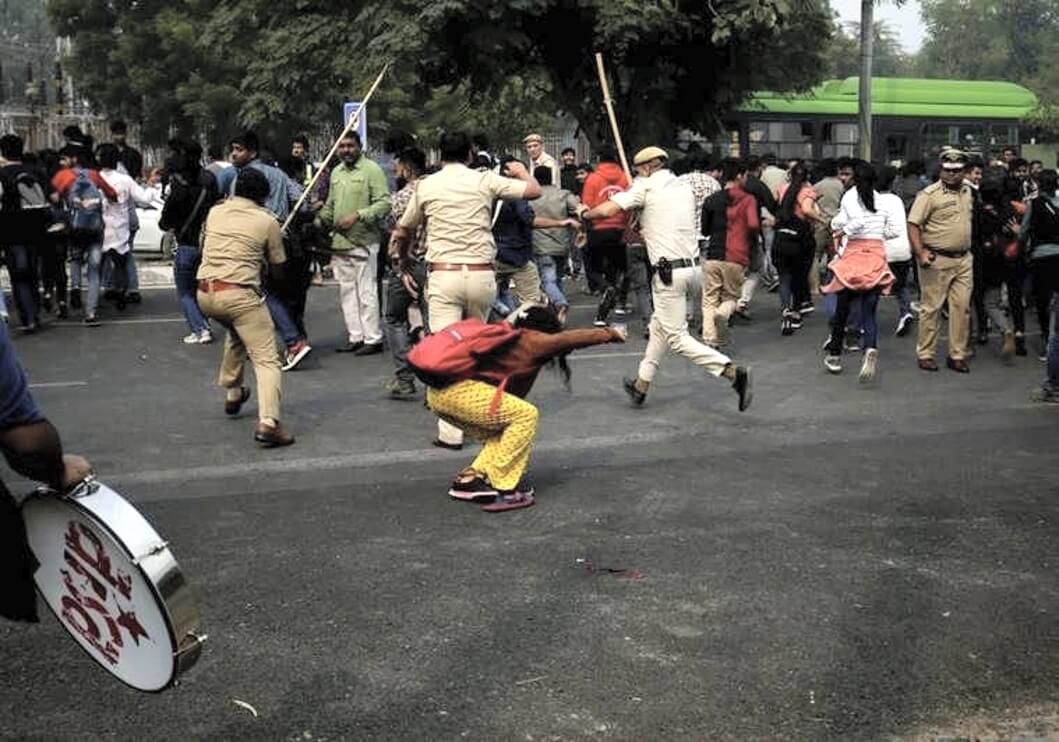 JNU hostels never levied service charges. Now, service charges are to be levied to the tune of Rs 20,400 per annum. This is not counting water and electricity charges, which the students are now being asked to pay according to usage. This will mean eviction from University education for a very large majority of JNU students.

Thanks in large part to JNU’s system of deprivation points in admissions (won by students’ struggles in the 1990s), 40 per cent of JNU students come from families with a household income of Rs 144,000 per annum. The hike in charges and fees would mean that every such family would have to spend over 40 per cent of its annual income to send just one child to University.

Also thanks in large measure to the deprivation points, more than 50 per cent of JNU students are women. A 999 per cent hike in hostel expenses will force a large number of these women to drop out of higher education.

What About Roll-Back of Fee Hike For BPL Students?

The Indian Express has correctly found that even after the so-called concessions for students whose families are in the Below Poverty Line (BPL) category, those availing the concession would still have to pay an extra Rs 12,000 annually for hostel expenses. The “service charges” which are slated at Rs 20,400 per annum without concessions, are Rs 10, 200 per annum with concessions. Under the present fee structure, no service charges are levied.

Also the merit-cum-means (MCM) scholarship offered by JNU—for students whose parent’s income does not exceed Rs 20,833 per month—would only cover roughly half of a student’s annual hostel and tuition expenses, whereas under the old fee structure, it covered 75 per cent of the fee. 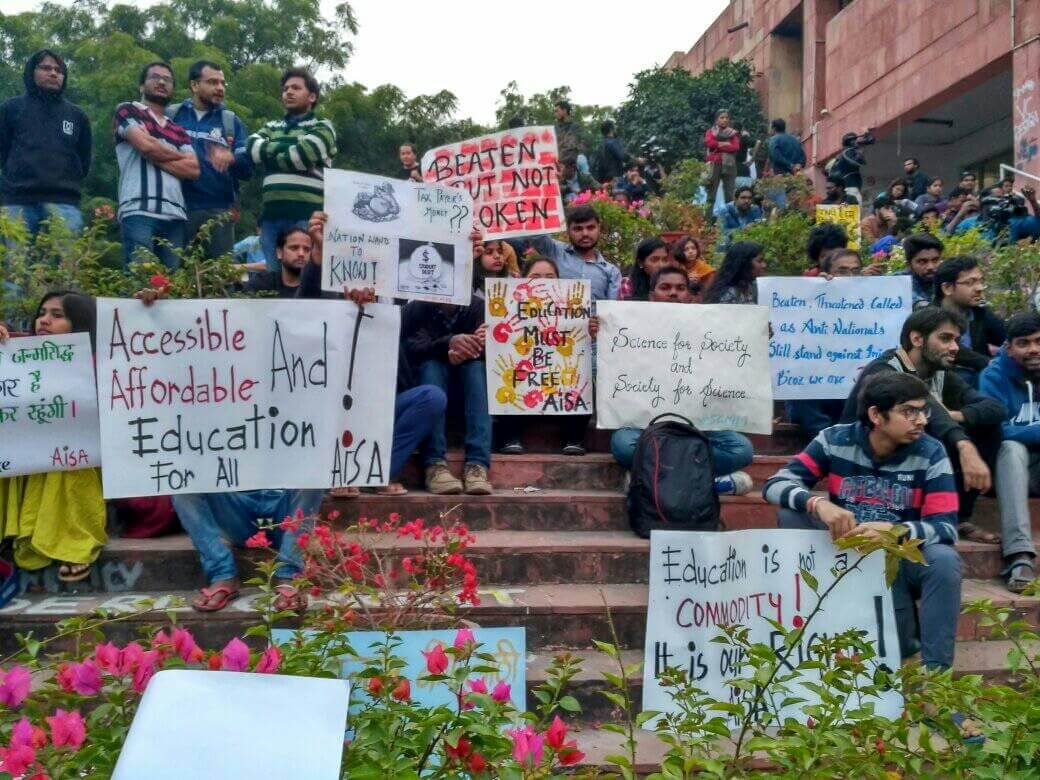 Why Special Treatment for JNU?

Actually, JNU’s hostel fee is not the lowest among the country’s best central universities. Visva-Bharati University, HCU, AMU, NEHU and Pondicherry University charge less, if not the same, as JNU. So if hostel facilities are privatised and its costs steeply raised in JNU, where the student movement is so strong, all other central universities will soon follow suit. So the question is not, “Why are JNU fees low”? The question is, “Why should university fees be high?” and “Why not build at least one JNU, offering excellent, affordable University education, in every state?”

Is there a fund crunch in JNU? Is JNU wasting public money?

The UGC allocation to JNU (including salary, pension and property tax & capital expenditure) for the year 2017-18 was approximately Rs 401 crore (for 8082 students). In contrast, the Central Government spent Rs 5200 crore/Rs1094.74 crore/year, in self-promotional advertisements for the Prime Minister from May 2014 to December 2018. Who is wasting taxpayers’ money? According to a CAG Report of February 2019, Rs 94,036 crore, collected as secondary and higher education cess, as well as Rs 7,298 crore collected as research and development cess from taxpayers remained unused. Why not use this amount rather than commercialising hostels?

In JNU, 2,500 students with fellowships pay Rs 7,500 (Rs 22.5 crore per annum) per month as housing rent allowance to the university. So, such students do, in fact, subsidise the University. But this is not charity. Charity promotes inequality, not equality – and so, should have no place on a University campus. 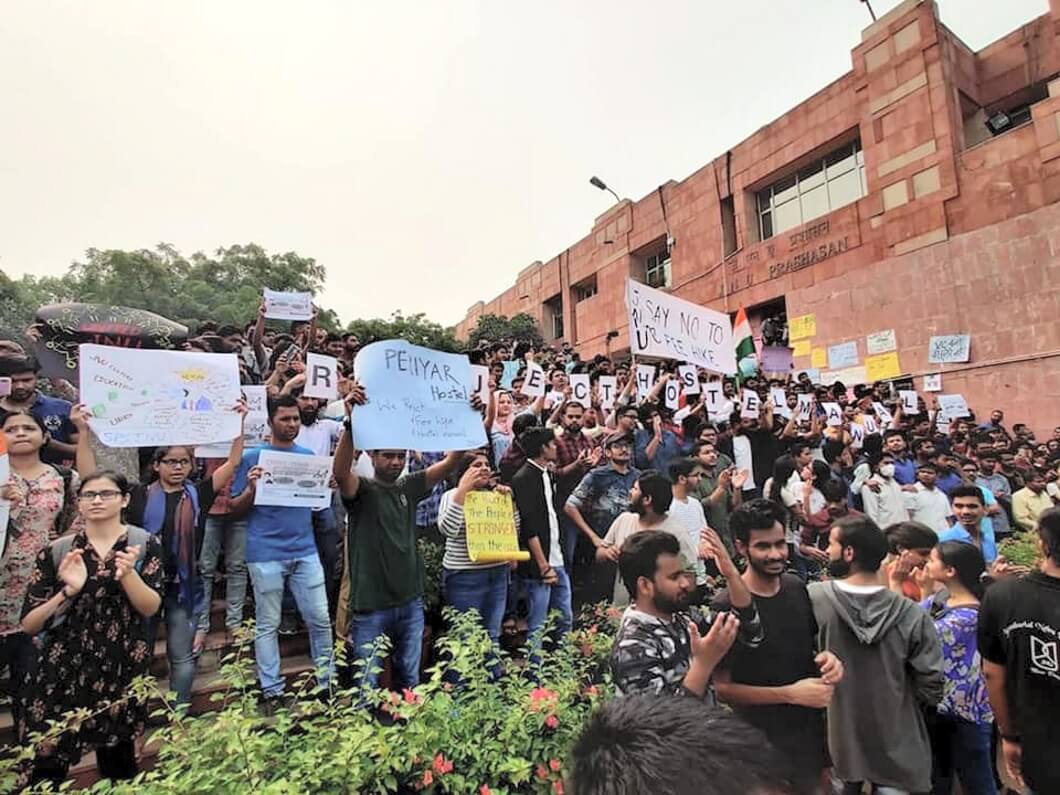 Why not Differential Fee Structure?

This is a bad idea, for the following reasons. First, the higher education cess is calculated as a percentage of income–so citizens with higher income (including parents of JNU scholars) already contribute more, or less, towards universities, based on their income. A differential fee model for students based on family income would mean that commercialised education is accepted as a norm, while some concessions are made to some students as charity.

This model in private schools has been known to result in discrimination against EWS students. Moreover, differential fees will cause an escalation in living costs overall on the campus—the presence of students paying steep fees will fuel a demand for hikes in mess bills, costs of dhaba food, and other amenities generally. This will make the overall cost of living in JNU higher, and more hostile, for students from lower income backgrounds. This will inevitably result in a more hostile environment for such students.

What is especially disturbing to see now, is the flooding of social media and TV media with material that spread fake news about JNU students. Fact-checking websites can barely keep up with the fake news about JNU: claiming JNU students are too old to be at University, for instance. Plenty of this stuff is openly Islamophobic: claiming 23-year old JNU student Shubham Bokade is actually 45-year-old Ahmad Raza, or that 30-year-old JNU student Pankaj Mishra is 47-year-old Moinuddin from Kerala. One particularly absurd but viral fake news circulated a picture of CPI leader Annie Raja claiming she was a JNU student. 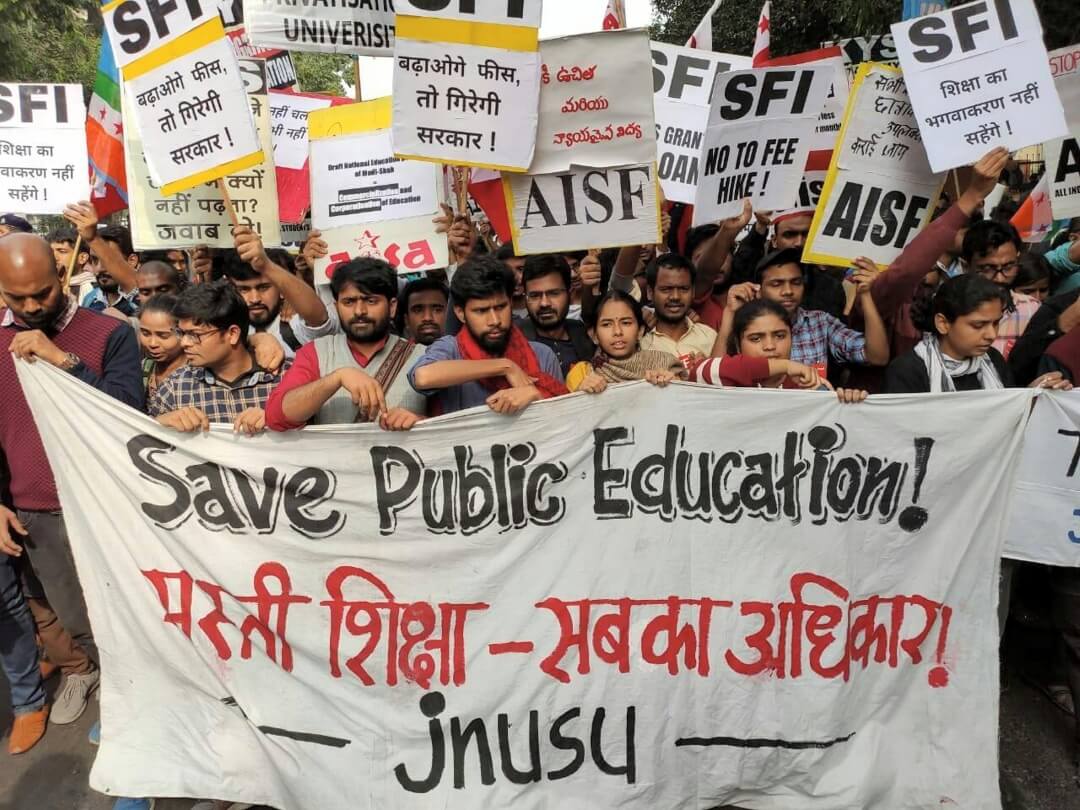 But by far the worst anti-JNU propaganda subjects women students of JNU, and in fact all women students, to the prurient, sexualised right-wing gaze. This gaze feigns horror, and titillates itself, with the bogey of the young college-going woman student who drinks, smokes, or has sex. Facebook is full of images of young women having a drink, or a smoke–being circulated to “discredit” JNU. The fact is that these women are not JNU students—but that is besides the point.

The point is that this gaze, combining both moralistic condemnation and titillation, makes all women everywhere unsafe. Note that photographs of young men drinking or smoking or using condoms are not circulated to suggest sexual anarchy. The popular film Three Idiots portrayed young male students drinking on their IIT campus–but those images evoked humorous indulgence, not moralistic horror.

It is not just anonymous social media trolls who slut-shame University students. BJP MP Subramanian Swamy is known to repeat the notion, on TV and Twitter, that ‘modern girls’ and feminist and left activists, especially those educated in universities, are “naxalites” who have “free sex”. BJP MLA and West Bengal state president Dilip Ghosh has slut-shamed Jadavpur University women students more than once.

It is time we refused to fall for such propaganda, and refused to look away from the real issue: the fact is that JNU students are fighting so that higher education can be accessed by the sons and daughters of farmers and workers. They are fighting to remind us that society must value people, based not on their wealth but on their social conscience.

Above all, we should understand why the Godi (pro-Modi) Media is fuelling hatred for JNU. Students are the one opposition that cannot be intimidated by ED and CBI raids, or for that matter even by police beatings, FIRs and arrests. They continue to speak truth to power, boldly. That is why the regime and its propagandists think they must try and discredit students by any means possible.

But the student movement fire is fast spreading beyond JNU. A section of BHU is agitating to defend a Muslim professor of Sanskrit targeted by fascists, and is also standing in solidarity with JNU, with banners saying ‘Narendra Modi Shiksha Virodhi’ (Narendra Modi is anti-education). The students’ movement has exposed the Modi regime’s anti-poor, pro-corporate character.