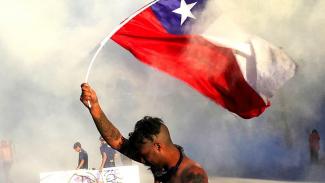 A massive people’s uprising is underway in Chile, to protest the rising inequality, cost of living and the anti-people policies of president Sebastián Piñera. The protests were sparked off by metro fare hikes – but in fact these were only the tipping point. The protests are an outburst of a deeper discontent over the legacy of the long Pinochet dictatorship that continues to scar Chile. Pinochet had led a coup that unseated the elected the socialist Allende Government in 1973 and unleashed brutal repression, ending only in 1990. But the Chilean Constitution is still the one brought into being by the brutal dictatorship. The dictatorship had also unleashed the neo-liberal economic policies, eroding labour rights and retirement benefits, and privatising health care and other social services. Thanks to Pinochet-era policies, temporary contract-based workers are not covered by labour laws and have no rights to unionise. As a result, less than 3% of Chile’s workers are covered by labour laws. Even permanent workers often are not allowed to be part of unions, but are just members of “bargaining groups” that do not have the right to strike.

The unemployment rate for workers at the bottom 10th of Chile’s socioeconomic ladder has averaged nearly 30% since 1990, while unemployment for the top 10th of earners has stayed around 2%. Pinochet had also replaced the original retirement system – which was based on combined contributions from workers, employers and the state – with a privately managed pension system, under which all workers except the military and national police were made responsible for their individual retirement accounts, with the state and employers contributing nothing. Even after the Michelle Bachelet led Government in 2008 made pensions mandatory for all, pensions here are less than minimum wages.

Chile is one of Latin America's most prosperous nations – and also has the highest levels of inequality. Education is expensive and privatised in spite of repeated movements against privatisation. As a result, the poor cannot afford education. High rates of tax evasion among Chile’s wealthiest citizens make the income inequality even sharper. People want the Constitution to address social and economic inequalities.

On November 11, the Chilean government finally bowed to protestors partially and agreed to write a new constitution to replace one dating back to the Pinochet dictatorship, and submit it for approval by a referendum. But the movement is demanding a referendum even before the process begins so the people can determine the mechanism for drafting the new Constitution.

The Government declared a temperoary state of emergency, and even after the emergency was lifted, has unleashed brutal repression. At least 24 people have been killed, more than 2300 people are injured, and of those, 220 suffered severe eye injuries and blindings, according to data from Chile's National Human Rights Institution (NHRI). The NHRI has filed 58 legal actions against police and armed forces for alleged sexual violence, and 246 for torture and other cruel treatment.

Youth are at the forefront of the Chile movement. Though these young people are born after Pinochet’s dictatorship ended, they are bearing the brunt of its consequences, and they are determined to ensure lasting change.