Skip to main content
Feature 24 August 2020
5 August vs 15 August: Save Constitution, Save India 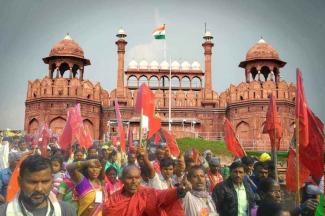 THE 5 August 2020 Bhoomi Poojan, or the foundation-laying ceremony, of the Ram Mandir now legally sanctioned by the Supreme Court to replace the Babri Masjid demolished nearly twenty-eight years ago, has been the most decisive political and ideological statement made by the RSS-BJP establishment in the middle of the raging epidemic and its complement, the protracted state of lockdown continuing since 25 March. The choice of the date, marking the first anniversary of the (un)constitutional coup against Jammu and Kashmir whereby the state was not only robbed of its special constitutional status under Article 370 but also of its very statehood and was bifurcated into two Union Territories, added to the already loaded political symbolism of the Ayodhya event.

The BJP claims that both abrogation of 370 and construction of Ram Mandir were mentioned in the party’s 2019 manifesto and the Modi government is merely fulfilling its poll promises for which it has the people’s mandate. This is a brazenly dictatorial interpretation of a victory won in a parliamentary democracy. The BJP may have the right to invoke its poll manifesto but it is sworn to govern on the basis of the Constitution of India. The deactivation of Article 370 without any discussion with the people of Kashmir was an outright violation of the Constitution. Likewise, Modi’s participation in the temple foundation ceremony is in clear negation of the secular spirit of the Constitution which requires the state to stay away from religion.

Modi’s Ayodhya speech is the loudest and clearest ever statement of the Hindu Rashtra project of the Sangh-BJP establishment. He projected Ram as the supreme symbol of India’s unity in diversity, and described the foundation of the Ram Mandir at Ayodhya as the culmination of a centuries-long quest. August 5 was then put in the same bracket as August 15, thereby making the Ram Mandir in Ayodhya a national project and not just a religious project of disciples of Ram. The conflation of Hindu identity with India’s national identity is the basis of the whole thesis of Hindu nationalism or Hindutva and Modi used Ayodhya precisely as a platform to expound the Hindutva framework without explicitly mentioning the Hindu Rashtra term.

5 August can by no means be bracketed with 15 August. If anything, it stands at loggerheads with the trajectory and significance of 15 August. Behind 15 August, 1947 was India’s national movement for independence and the issue of Ram Mandir never figured on the agenda of that movement. Ayodhya-Faizabad and the entire region of Awadh was an important centre of the 1857 upsurge against the British rulers. The popular consciousness in the region pulsated with the spirit of Hindu-Muslim unity and the passion for freedom from the clutches of British colonialism. Even during the last decades of freedom movement when communal polarisation had reared its ugly head, the issue of Ram Mandir never had any prominence.

It was only on the night of 22 December 1949 that the idols were fraudulently placed inside the mosque to turn it into a ‘disputed structure’. The RSS which had been banned in the wake of Gandhi’s assassination had just got the ban lifted in late July 1949 by giving an undertaking of loyalty to the Constitution and the tricolour and promising to run the RSS as a cultural organisation. In November Godse was hanged for Gandhi’s assassination. That was a juncture when the RSS and other forces of Hindutva were badly discredited and cornered. It should also be noted that the Faizabad DM KK Nayar who refused to remove the idols despite clear instruction and had to subsequently quit the service on charges of dereliction of duty became MP from Bahraich in 1967 on a Jan Sangh ticket. The issue would be revived again in the 1980s with the BJP facing another low ebb.

It was reassuring to see that on August 9, 2020 the workers and peasants of India hit the streets with the ‘Save India’ banner against the Modi government’s aggressive privatisation campaign and the ordinances enforcing corporate control over India’s agriculture. The month of August in India is always remembered for the 9 August 1942 Quit India Movement and 15 August 1947 which saw India attain political independence. Beyond the inner circles of the RSS-BJP parivar, August 5 will only be seen as a day when the Modi government violated the basic spirit of the Constitution. The spirit of August 9 and August 15 will always inspire the people of India to defend India and the constitutional foundation and framework of India’s democracy.