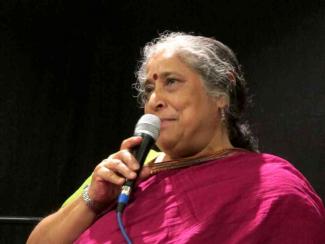 With great grief, CPIML bids farewell to feminist scholar, activist, teacher and writer Ilina Sen, who succumbed to cancer on 9 August 2020. She was 69.

Ilina Sen worked closely with women’s and people’s movements in Chhattisgarh since the 1980s, when she and her partner Dr Binayak Sen moved to the state inspired by Shankar Guha Niyogi. Binayak worked with the Shaheed Hospital set up by and for workers by the Chhattisgarh Mines Shramik Sangh (CMSS). Ilina worked with the renowned Dr Richcharia in a valiant attempt to protect unique seeds and rice varieties of Chhattisgarh from corporate farming policies of the government. She also worked with the trade union of mines workers organised by Niyogi in Dalli Rajhara.

Ilina Sen’s pathbreaking collection of essays published in 1990 as A Space Within The Struggle is still a classic. It traced the role of women within workers’ and peasants’ movements: a role that till then tended to be insufficiently acknowledged within those movements, as well as within the feminist movement. As a teacher at the Mahtama Gandhi Antarashtriya Hindi Vishwavidyalya in Wardha, and later at TISS in Mumbai, she was one of the pillars of the women’s studies discipline in India.

In 2007 her partner Binayak Sen, a civil liberties activist and doctor, was arrested by the Chhattisgarh Government under the draconian UAPA law, accused of “links with Maoists”. The UAPA is a law that allows the government to imprison people for their dissenting beliefs, for years without trial and without bail. Ilina threw herself into the fight to free Binayak and other political prisoners, and Binayak was eventually released on bail by the Supreme Court in 2011. She was especially active in drawing national and international attention to the scores of adivasi prisoners who were branded Maoists and imprisoned in Chhattisgarh jails. She wrote about the experiences of that struggle in a memoir, Inside Chhattisgarh – A Political Memoir. But this fight took its toll on Ilina’s health. She was diagnosed with cancer soon after Binayak’s release.

CPIML extends condolences to Ilina Sen’s partner Binayak Sen, and their two daughters. Her loss is a heavy one for the women’s movement, the civil liberties movement and women’s studies as a discipline, but her spirit and determination will continue to inspire us.