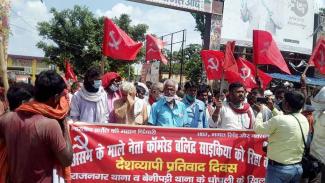 CPIML and All India Kisan Mahasabha observed 14 August 2020 as a day of protest across the country for the release of CPIML CC member and AIKM National Secretary Assam youth leader Balindra Saikia and against the witch hunt of AIKM National Secretary and Viplavi Kisan Sandesh Editor Purushottam Sharma whom the Delhi Police detained at the Thana for 8 hours and interrogated with the intent of falsely implicating him in the Delhi riots.

Balindra Saikia was arrested from his home in Dibrugarh District and sent to judicial custo-dy. He had been leading a series of agitations for compensation for farmers who have lost their lands to a road construction project. Before the arrest, a mob led by BJP-supported goons surrounded his house in the morning and challenged him to come out of the house. This continued till local Party supporters reached the spot. A complaint was filed in the Thana but instead of arresting the anti-social elements, the police arrested Balindra Saikia. He was subsequently released on bail, several days later.

A few days earlier, another CPIML CC member from Assam Comrade Bibek Das was witch-hunted merely for a Facebook post on the condition of tea garden workers and poor in Vishwanath District.

The targeting of activists like Akhil Gogoi, Bittu Sonowal, and CPIML leaders Bibek Das and Balindra Saikia is clearly a part of the BJP government’s countrywide cycle of repression to crush voices raised in favor of the Constitution and rights of the working class.

Similarly, CPIML and AIKM have condemned the conspiracy to implicate AIKM National Secretary and Viplavi Kisan Sandesh Editor Purushottam Sharma in the case relating to the Delhi riots. Under the excuse of investigation, the Delhi police Special Cell made Comrade Sharma sit at their Lodi Colony office for 8 hours.