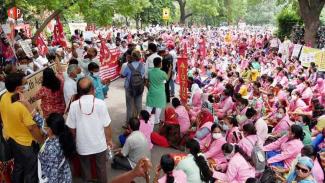 ASHA (health) workers, midday meal workers and Anganwadi workers held a 2-day strike on 7th and 8th August, in which lakhs of scheme workers struck work all over India. These workers (mostly women) are protesting the fact that they are putting their lives on the line during the pandemic, and yet are not even receiving a minimum wage.

The ASHA strike in Bihar began a day earlier on 6 August, while the strike became extensive in most other States in the country. The solidarity extended to the just demands of the strike by society and other organizations, especially frontline workers like sanitation and contractu-al health workers, has given a great strength.

On 9 August (Quit India Day) the scheme workers and ASHAs formed the backbone of the Save India Satyagraha/Jail Bharo protests called by Central Trade Unions.

Raising slogans for full wages, dignity and rights, ASHA workers alleged that the Central as well as State governments are using ASHAs like bonded labor.

Shockingly, the ASHAs had criminal cases filed against them by the Delhi Police for partici-pating in the Central Trade Union’ protests at Jantar Mantar in Delhi on 9 August.