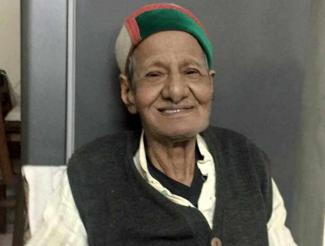 Comrade CD Dimri, 85 passed away on 9 August at the Escorts Hospital where he was admitted in the morning due to breathing difficulty. He had been having respiratory troubles for some years which kept him mostly confined to the house.

Comrade Chakra Dhar Dimri was associated with the CPIML for about 4 decades and he remained dedicated to the Party till the last. Before he joined the CPIML, he was with the CPI. He was a prominent leader of Secondary School teachers in Delhi. He went to jail in the teacher’s agitation in 1968 and was suspended from his job. He remained active among teachers in various ways.

His home was always a place where comrades met and talked. He shared a warm rapport with comrades of all ages. During the Uttarakhand State movement he played a leading role in forming a forum to mobilize support among migrant Uttarakhandis in Delhi. Comrade Dimri contributed in a large measure to the progressive-democratic atmosphere that prevailed in his home. He is survived by his wife and four sons. Comrade Rajiv, AICCTU General Secretary, is his eldest son who left his MBBS studies half-way and became a Party full time activist.