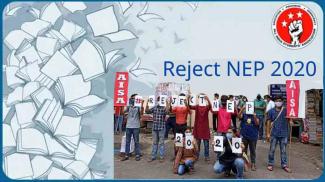 THE new National Education Policy is here after 34 years, passed in a hurried fashion by the Cabinet of the Central Government. The Modi government is implementing structural changes in the Indian education system at a time when Parliament is closed due to pandemic without any debate. Prime Minister’s slogan “Aapada mein avsar” (Opportunity in Crisis) came true when government decided to institutionalise “Graded Inequality” in the education sector during the pandemic.

If Ambedkar would have been present in today’s time and read the NEP document, he would have torn it up publicly and burnt it to ashes on account of its central message i.e. annihilate social justice. NEP 2020 when carefully read brings out a blue print to undo the demands for accessible, affordable, and quality education and erase the progressive polices of social justice of the past decades. The whole thirty-three thousand plus word document mentions “social justice” just thrice (if you also count the mention of Ministry of Social Justice) and doesn’t even mention reservation, something that has come to define social justice in our country and faces the most number of attacks.

It is not a coincidence or a mistake, but a planned elimination of the policy of equality. The passing of the NEP, laying the foundation of the Ram Mandir on the debris of secularism with the Prime Minister Narendra Modi hailing it as a remarkable document are to been seen as part of a pattern. A pattern that entails undoing the 30 year long fight for access, equality, and justice in the sphere of education. On August the 7th, 30 years ago, the then Prime Minister Vishwanath Pratap Singh, declared in Parliament the acceptance of recommendations of the Mandal Commission, i.e. reservation for Other Backward Castes (OBCs). This was a historic moment, as the commission granted 52% of India’s population 27% of reservation in jobs and educational institutions.

The privileged and anti social justice forces erupted in rage. They burned down streets, brought the country to a halt. They saw the policy of equality as a pushback against their dominance and power in social, cultural, economic, and political spheres. Their authority over the marginalised began to shake, if not break which was inevitable if reservation were implemented. Unable to counter the demands of social justice from the OBCs, RSS-BJP unleashed a campaign of hate. L K Advani went on a rath yatra across the country in the name of the Ram Janmabhoomi campaign. This was also an effort to rally people demanding social justice and those against it under one banner through hate and violence by BJP.

However, with all the hurdles, reservations were implemented and this heralded another phase of democratisation of Indian campuses and society after introduction of reservations for SCs and STs. From universities to jobs, the process of democratisation through OBC reservation grew. Those who were denied opportunities and condemned to marginalisation and exclusion, saw education as a medium of upward social mobility.

Through the introduction of NEP and laying of a foundation for the construction of the Ram Mandir, the BJP-RSS are signalling the reversal of the recommendations made by the Mandal commission after 30 years. This is the reason why despite exposing how 10,000 OBC seats in NEET examination belonging to state quota have not been filled and in return were converted to general seats, there has been stoic silence from the PM, the BJP, and the RSS. Instance after instance, people have exposed the scuttling of OBC reservation and annihilation of social justice in recruitment exams and at college and university levels, there still has been no response from the government.

The push for online and digital modes of education, privatisation of school and college education, and closing down of schools and colleges are a clear indication towards restricting access. Nearly 60-70% Indians do not have access to a proper internet connection. This figure is even more glaring if we take the rural populations. Online education and the government’s desperation towards implementing it despite all limitations has made reservation and social justice irrelevant as reserved seats will lie vacant as the marginalised do not have internet access. For others who have managed education somehow, the selling of PSUs, railways, and other government owned industries to corporates, puts the last nail in the coffin, taking away job security as unemployment rises. No government jobs would also mean no reservation as private firms as well as educational institutions are kept free of the bounds of reservation. The cycle of limiting opportunities for the oppressed classes is thus complete.

The NEP is therefore an instrumentat of exclusion. Taking the example of the much-celebrated multiple entry/exit four-year undergraduate programme, while on the outside it seems as a reasonable choice offered to the student. However, this choice-based policy is nothing but conversion of educational arena into a shopping mall with degrees as products, where a student enters with an empty basket, and money will define both the extent as well as quality of education a student has access to. In order to climb up the ladder, educational loans will only be the module. Structurally this policy is designed to ensure that only the privileged with the money and resources will survive, and the poor and marginalised will have neither opportunity nor access, and even if they do, it will be at the mercy of corporate establishments.

This is exactly what India looked like before 1990, a country where privilege ruled. The Mandal agitation and the democratisation of Indian society through OBC reservations along with SC and ST reservation brought a paradigm shift. It created an entry point for the oppressed and marginalised into the hitherto closed arena of  knowledge systems. It created  a counter narrative to daily casteism. It generated social solidarities across platforms. It raised a voice in favour of the annihilation of caste and the dismantling of “graded inequality”, however BJP-RSS had different plans, just like they did in 1990s. To communalise, privatise, and hegemonise the Indian polity, its economic system, cultural space, and social structure.

That is why Hindutva is a project to unite the divided society on a project of hate. That is why, the politics of “Mandir” and “Market” are back to destroy the demand for further democratisation of the marginalised through fundamentalism of hate and legitimisation of inequality. NEP is just a step in this process to undo history and to rewrite the future. That is the reason Sanskrit is back to be promoted and taught in schools, to teach Brahmanism and institutionalise segregation in and the division of Indian society.