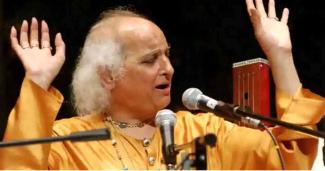 Pandit Jasraj passed away on 17 August in New Jersey, USA, at the age of 90. He was the foremost living exponent of the Mewati Gharana of Hindustani classical music. Pt. Jasraj can be seen as the confluence of the 'popular' and 'classical' or of 'secular' and 'spiritual'. Purity and experimentation walked hand in hand in his music.

He was born in Hisar, present day Haryana. He was initiated into the world of music by his father at the age of three. His father Pandit Motiram passed away when Jasraj was four years old. His elder brothers Pandit Maniram and Pandit Pratap Narayan were accomplished musicians too. After the demise of his father he started learning tabla under the guidance of Pandit Pratap Narayan. By the age of seven he had begun accompanying his brother in concerts. In a few years' time he was accompanying great musicians on the tabla and was considered a very talented tabla player.

As a child he was drawn towards music not just because of his family but by a very unusual influence. Those days his family lived in the city of Hyderabad. Jasraj used to pass a small restaurant on his way to school. One day he heard a song playing on the record and forgot to go to school. From the next day his routine changed. He stopped going to school. This five year old child would sit on the footpath in front of the restaurant throughout the day to listen to that one particular track, have his tiffin, and come back home on time. This impressive singer was none other than Begum Akhtar and the track was 'Deewana bana hai toh deewana bana de'

On several occasions he himself narrated the story of how he had turned towards singing. Once, at the age of fifteen, he accompanied Pt. Kumar Gandharva on the tabla at the Lahore radio station. Next day another singer of great reputation came to his house and started complaining to his brother Pt. Maniram about how Pt. Kumar Gandharva made a blunder while singing at the radio station. Jasraj was listening and told him that according to his understanding Kumar Gandharva's performance was flawless. The complaining singer was elder to him and immediately rebuked him saying 'Jasraj, you beat the hide of dead animal. You should not speak when we are talking about ragas as you cannot understand it.' In two or three days' time there was another incident which showed him the inferior status of the accompanying artists. That was when he decided to turn towards singing and earn respect for himself.

However, the teenager's journey which began with the purpose of earning respect for himself transformed into a journey of self-exploration eventually touching musical excellence. His musical journey can be divided into two parts. The first is about achieving excellence in music and the second related to bringing spirituality to the core of his music. However, his spirituality never made him intolerant to others' beliefs. In the 2002 Gujarat carnage Ustad Faiyaz Khan's tomb was vandalised in Vadodara. Ustad Faiyaz Khan is considered to be one of the greatest vocalists Hindustani classical music ever produced. Pandit Jasraj was pained with this act of vandalism and declared to bear all the expenses of the restoration of the tomb. Starting his concert with 'Om Namo Bhagwate Vasudevay' and ending it with a bhajan never came in the way of him singing a bandish like 'Mero Allah Meherban'. However it was unfortunate to see his name as one of the signatories on a letter urging people to vote for Modi in 2019 Lok Sabha elections. It was painful for many of his admirers to see him supporting a figure whose politics went against the musical heritage Jasraj stood for.

I cannot resist sharing another story about Pt. Jasraj. The famous dancer Leela Samson once told me that she came across a very talented student who wanted to learn from Pt. Jasraj. He wanted Leela Samson to introduce him to Pandit ji. Eventually, she fixed a meeting with Pandit Jasraj at his Mumbai residence. Pandit ji gave a tanpura to the student and asked him to sing something. Student was very nervous and he could not even tune the Tanpura. Pandit ji patiently waited and then tuned it for him. When the student started singing Pandit Jasraj closed his eyes and listened carefully. When he finished singing Panditji asked him about his guru. The student took two names but Panditji was not satisfied. He asked about his real guru but the student was unable to think of any other name. Then Panditji told him about the speciality of his singing style and said your real guru is not in this world and that you have been heavily influenced by Abdul Karim Khan Sahib. The student was stunned. He told Panditji that his father had records of Abdul Karim Khan which he had heard as a kid. Pandit Jasraj told him that sometimes gurus bless like this too. I am no one to teach you. This kind of musical sensibility and humility is indeed rare today.

Pandit Jasraj took ‘murkis' and 'taans' from what is considered light music and infused them with his spirituality through his voice, which had the qualities of a vibrant waterfall. Through this he was able to generate such an effect on listeners that no one was left behind. For this he emphasised on shuddha shabd and shuddha bhava. In music words and poetry were considered secondary. That's why they were not pronounced with clarity. Pandit Jasraj thought that it was important to communicate the exact words too. Otherwise one can sing a raga flawlessly but the performer will not be able to awaken the desired emotions among listeners.

Pandit Jasraj created a unique style of jugalbandi (duet) which was named after him as 'Jasrangi'. In this style male and female singers sing two different ragas in complete harmony with each other. In an interview he said that in all the vocal male female jugalbandis he always saw at least one singer suffering due to their different nature. He wanted to create a complete harmony and the ancient Moorchhana Bhed (ascending and descending movement of seven notes in successive order) came handy in doing so.

In Sanskrit poetics nayakas (the heroes) are divided into several categories based on their characteristics. If one has to categorise the music and the personality of Pandit Jasraj he will fall in the category of the Dheerlalit. A hero who is the confluence of calm, of romance, and an aesthetic of eternal playfulness. Pandit Jasraj's music is that confluence of these qualities and he will always be remembered for that.