Skip to main content
Editorial 24 August 2020
Democracy, the biggest gain we made from our freedom movement, must be saved at all costs 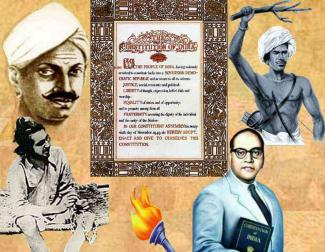 INDIA observed the 73rd anniversary of Independence in the midst of a raging epidemic. While many countries in the world are now recovering from the havoc of the Covid19 pandemic, in India the graph continues to be on a steep climb with more than 60,000 cases being added per day. With more than 25 lakh cases and nearly 50,000 deaths, the ID 2020 environment is undeniably pretty gloomy. The bizarrely planned and utterly mismanaged lockdown has only deepened this gloom with large sections of Indian people facing an acute economic crisis, which for many on the margin means an outright crisis of survival.

But the darkest shadow on the spirit of Independence comes from the government of the day which is every day making a mockery of the Constitution and the core constitutional principles of justice, equality, liberty and fraternity. In short, we can call it a crisis of India’s Independence where the history, agenda and vision of India’s freedom movement are being sought to be subverted and rewritten by the powers that be. After seven decades of Independence, the history of our freedom movement appears a distant past for most Indians, and the Sangh-BJP dispensation is using this disjunction to the hilt to mount a concerted attack on the history and legacy of the freedom movement and its product, the secular democratic republic of modern India founded on the basis of the Constitution.

India’s freedom movement has a very rich and diverse history that laid the foundation of the national unity and constitutional framework that we now tend to take for granted. From the Santhal Hool and other peasant-adivasi revolts of the 1850s and the great 1857 First War of Independence, we have a glorious century of multifaceted people’s resistance that eventually culminated in the ouster of the British colonial rule. From the early peasant revolts to Gandhian satyagrah to communist-led peasant upsurges like Tebhaga, Telengana and Punnapra-Vayalar, India’s freedom movement was a protracted powerful assertion by India’s peasantry. Old patterns of landlordism and usury have certainly been weakened, though not fully abolished, but the dream of peasant rights over land, water and forest today faces a stronger threat from corporate aggression.

India did not have a numerically big working class during the freedom movement days, but the working class and its struggles played a key role in strengthening and energising the popular assertion for independence. The trade union movement was of course led primarily by the communists and socialists, but Congress leaders like Lala Lajpat Rai and Jawaharlal Nehru were also closely associated with the All India Trade Union Congress (Lajpat Rai was the founding President in 1920 and Nehru became AITUC President in 1928). Dr Ambedkar played a very pivotal role in advancing the struggle for working class rights and pro-labour legislations. His Independent Labour Party had a powerful presence among Maharashtra textile workers and ILP treated Brahiminism/Manuvad and capitalism as its twin targets. His famous statement that caste was not division of labour, but division of labourers pointed to the need for uniting labourers as a class by linking up the struggles against caste oppression and hierarchy and capitalist exploitation. Today the labour rights and legislations secured since the freedom movement days and the public sector built through the fight for nationalisation are being sought to be systematically dismantled.

Along with peasants and workers, the freedom movement was very much a movement of common Indians with people from all walks of life plunging into the movement as the quest for freedom grew more and more intense. It was above all a movement of young, determined, inspired Indians where women fought alongside men. When we talk about the freedom movement we must always remember that most people were fighting for multiple freedoms at the same time – the struggle for freedom from caste oppression and injustice was an integral part of the freedom movement as was the women’s fight for equality and emancipation from patriarchal control. Similarly, in the princely states, people were fighting simultaneously for freedom from their respective feudal-royal rulers as well as colonial subjugation. Without this struggle for freedom within the princely states the merger of hundreds of princely states with the Union of India would not have been so smooth and quick.

In terms of forms and methods of struggle and mobilisation, the freedom movement was the confluence of many streams that spoke to and influenced one another. The Congress of course emerged as the main platform and the mass struggles periodically announced by Gandhi attracted widest participation across the country, but the freedom movement was clearly not monolithic. If we look at the decade of 1940s, it was a mosaic of several major patterns where the Quit India Movement called by Gandhi but carried forward by spontaneous popular assertion, the INA expedition by Subhas Bose, the communist-led initiatives like the Tebhaga-Telangana and other peasant upsurges, the naval mutiny and powerful working class struggles, all contributed to the final push for freedom.

If there was one ideological stream which stood away from the freedom movement and even collaborated with the British rulers and only helped divide and derail the freedom movement with its communal agenda, it was the Hindutva brigade comprising Savarkar’s Hindu Mahasabha and Hedgewar’s RSS. The competitive widening of the communal fault-line by the Hindutva stream and the Muslim League, aided and abetted by the shrewd manipulation of British colonialism, eventually created an environment where freedom could only arrive mired in communal bloodbath and territorial partition marked by the traumatic displacement and migration of millions of people.

In an ironic twist of history today this Hindutva stream with no roots in India’s anti-colonial freedom movement has emerged as the dominant ideological-political trend which rules at the Centre and nearly half of India’s states and has a tightening grip on the institutional framework of our constitutional democracy. The communal division and trauma of partition, and the repressive repertoire of colonial rule are the key threads the Sangh-BJP establishment has picked up from India's colonial past. The Company Raj is being resurrected as corporate rule, draconian laws are being reinvoked as the basic legal infrastructure of statecraft, diversity and federal rights are being bulldozed under the steamroller of centralisation and nationalism is being rewritten as majoritarian domination and systematic marginalisation of minorities. And the right to chart our own course free from imperialist dictats is being increasingly mortgaged to the interests of US-Israel strategic axis as Indian foreign policy alienates neighbours and former friendly countries to appease the US and the economic policy camouflages a growing dependence on global capital and foreign corporations as 'Atmanirbhar Bharat'.

Did the freedom movement give us any warnings about the shape of things that we encounter today? Yes, indeed. There was Bhagat Singh who warned us that freedom must mean a complete rupture with colonial governance and the class rule of landlords and capitalists, else freedom would degnerate into a transition from White English rule to takeover by their brown sahib successors. There was Dr. Ambedkar who pointed to the inherent tension between formal political equality and underlying social and economic inequality, the threat of personality cult trapping democracy in a dictatorial cage, and the calamity of Hindu Raj reinforcing the caste order to deny justice and liberty for the socially oppressed and the minorities.

Narendra Modi keeps telling us that nothing has happened in India in the last seventy years. That actually gives us a clear and honest idea of what he is actually trying to do – he is trying to dismantle whatever gains we made as a constitutional democracy and push us back to the trauma of partition and communal distrust and hate from which India has been trying to recover and move forward. And in doing this, he draws on the accumulated betrayals and capitulations made by successive previous governments vis-a-vis the dreams and values of the freedom movement and the commitments made in the Preamble to the Constitution of India. For we the people of India, the message is loud and clear. We have to hold on to and expand the gains we made in terms of the spread of democracy, and people’s rights and participation, and save the democratic republic from descending into a fascist Hindu Rashtra where Corporate Raj and repressive governance will trample upon all our resources and rights. #FreedomFromFascism is the clarion call of Independence Day 2020.