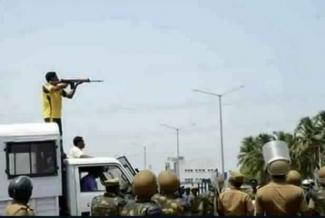 An AIPF Team consisting of R. Vidyasagar, social scientist, Clifton, Advocate Bangalore, G. Ramesh, Advocate, Tirunelveli, Abdul Nizam, Advocate Thirunelveli, and Sundarraj, social activist, Thirunelveli. has visited and Kumareddypuram, Veerapandipuram, Pandarampatti, and settlements of Anna Nagar and Therespuram in Tutucorin town on 27th May 2018. The team also visited the Government General Hospital at Tutucorin and interacted with in patients who were subjected to severe injuries due to police bullets and lathi charge.

A summary of their report is below.

Why People Want Sterlite Shut Down

IT is an undisputed fact that the running of the Sterlite copper smelting plant has caused severe pollution in the region leading to catastrophic environmental pollution of ground water and the air. Ground water, which is the sole source of water in the villages surrounding the plant has been severely polluted and villagers are now forced to either purchase water from private suppliers at Rs. 10/- per pot or rely on water supplied, albeit erratically, by the company. Most villages have refused the water supplied by the company and hence are spending daily for purchase of potable water. Agriculture has been completely destroyed by the emissions from the plant settling on them. Air quality is hazardously reduced to extremely poor quality. Health impacts on the people, as a result, has been devastating with high prevalence of cancer, forced hysterectomies, respiratory disorders, rashes, skin diseases, etc. Indeed cancer has taken the lives of a disproportionately large number of people.

Sterlite Copper is a business unit of Vedanta Ltd, which itself is a subsidiary of the London-based Vedanta Resources Plc, whose owner is Anil Agarwal. In April 2003, the Supreme Court of India slapped a fine of Rs. 100 crore on sterlite for pollution created by the unit. This is an acknowledgment of the fact that sterlite is polluting the area. The National Environmental Engineering Research institute reported during 1998, 1999, 2003 and 2005 showed that the sterlite copper factory has been polluting the environment through emissions that did not conform to the standards set by the TNPCB. A 2010 report by Environment Law World Alliance categorically stated that the copper smelting facilities have adverse environmental impacts that can extend to several tens of kilometers, endangering human health and contaminating water supplies.

People have adopted every means available within the democratic and constitutional framework to raise their grievances, which is for the plant to be shut down. It is an acknowledged fact that the villagers have been protesting against the plant for almost two decades now. They have petitioned all the concerned authorities and State/Central Governments. They have approached the Courts for justice. They have adopted non-violent forms of struggle including sit-ins, protests, putting up black flags on top of their houses, etc. It is learnt that prior to this incident, there have held hundreds of such demonstrations in which thousands of people have participated but never has such untoward incidents taken place. Most recently on 28th March tens of thousands of men, women, children, senior citizens, youth from all walks of life including agrarian communities, fisherpeople, artisans, businesspersons, students, salt pan manufacturers, bus drivers, street vendors, etc. from around 20 villages adjacent the plant, and from Thoothukdi town, held a peaceful demonstration for more than 3 hours, which passed off peacefully.

The more recent phase of the campaign to get the Plant shut has seen a rise in agitations in village after village and in Thoothakudi town over the past year or two. In fact we are witness to the struggle camps erected in various villages where people have pitched small shamianas with huge banners demanding for immediate closure of the Plant. The people have gathered in these struggle sites everyday in peaceful protest for more than 100 days. The people have been going to the Tamil Nadu Pollution Control Board and the District Collector every week to submit memorandums reiterating their demand. To date there has not been a single reply to these representations.

The Day Of The Firing

On 22nd May, armed with mats, bedsheets and some packed food, senior citizens, men, women, their youth and children began their journey from their villages to the Collector's office. The first shock for the day was when the police, in large numbers, arbitrarily detained people on some villages including South Veerapandiapuram, Kumarareddipuram, Pandarapatti, etc. In few villages, the people were forcibly loaded into police vehicles and buses and dropped off at far places from the Collector’s office. South Veerapandiapuram people were lathicharged outside their villages itself and forced into these vehicles. Unshaken they still walked long distances and reached the Collector’s office and sat in peaceful demonstration. Police, by the hundreds, mobilised from other districts were brought by the district administration on this day. During the demonstration, few people went inside the District Collector’s office to submit a memorandum but were lathicharged out of the office by the police who then resorted to indiscriminate lathicharge, assault and firing on the people killing about 13 persons and injuring hundreds. The scared people ran to save their lives but were chased and beaten by the police. This took place in late morning to early afternoon. What happened after this well known to all through the media reports and social media reports: people were brutally targeted by the police armed with assault rifles, 13 were killed, hundreds injured.