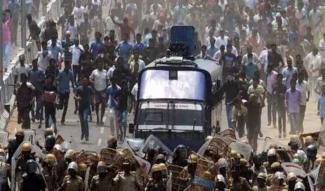 (We briefly reported on the Thoothukudi massacre in the last issue of Liberation. The AIPF team was the first fact-finding team to visit Thoothukudi after the massacre, in this issue we carry the report. As we go to press, there are reports of wholesale arrests of people at Thoothukudi, including advocate S Vanchinathan of the Madurai Bench of the Madras HC, also the State Coordinator of People’s Rights Protection Center, who represented Thoothukudi people and anti-Sterlite protest groups in many cases. Another advocate K Hariragavan has also been charged and has been denied anticipatory bail. Earlier, a Tamil television actor Nilani was arrested after she posted a video of herself criticising the TN Government for the Thoothukudi firing, wearing the costume of a police officer for a role she plays on TV. Democracy is being killed in Tamil Nadu – with the Government not even making a pretence of protecting free speech and completely unashamed about its massacre of citizens.)

The people of Thoothukudi (Tuticorin) in Tamil Nadu have, for two decades, been protesting the transnational corporation Vedanta’s Sterlite copper smelter which has been poisoning the air and ground water, with devastating impact on agriculture and people’s health.

May 22 2018 marked the 100th day of the latest wave of protests against the move to expand the smelter and double its capacity. What followed was a scene straight out of the Jallianwala Bagh massacre by the colonial British Raj. The Tamil Nadu police first lathicharged protesters without any provocation, and then unleashed an all-out slaughter of the protesters. Video footage shows men in plainclothes can be seen firing from assault rifles and sniper rifles from atop police vehicles, aiming to kill protesters. 13 unarmed people were killed. One 17-year-old girl had been shot inside her mouth and killed. Hundreds have been badly injured.

The Tamil Nadu police could not have displayed such ferocity towards unarmed protesters without a signal from the Government of Tamil Nadu. Prime Minister Modi maintained complete silence on the massacre while tweeting ‘fitness’ videos that seemed to mock the people of Thoothukudi who had, after all, been shot dead for pointing out that Sterlite had not left the air fit to breathe, water fit to drink, and people fit to live. Modi’s silence is inspired no doubt by the fact that Vedanta is one of the top funders of his party the BJP. The BJP and its propagandist TV channels accuse environmental and human rights activists of being ‘foreign-funded’: in fact, it is the BJP which, to protect the interests of its MNC funder Vedanta, is willing to have Indian citizens killed. Over the years, both BJP and Congress received funding from Vedanta that the Delhi HC found to be in violation of FCRA regulations. Now, the Modi Government has tweaked FCRA regulations to not only allow such foreign corporate funding but to keep such funding secret.

The Sterlite copper smelter is in blatant violation of environmental laws. The clearances and licences it was given by the Union Ministry of Environment & Forests (MoEF) and the Tamil Nadu Pollution Control Board (TNPCB) are illegal. Over the decades, both Congress and BJP Governments and their ministries at the Centre as well as DMK and AIADMK Governments of Tamil Nadu enabled these illegalities. Courts, including the Supreme Court, also failed to uphold the law: in 2013 for instance, the Supreme Court agreed with most of the allegations made by the people’s movement of Thoothukudi about the illegalities committed by Sterlite, and yet the SC did not order the smelter to be shut down, instead ordering it to pay a Rs 100 crore fine. That money has not reached any of the victims whose health and livelihood has been affected by the polluting smelter. In December 2014, the Modi government tweaked the interpretation of environmental regulations in a way which helped particular plants like the Sterlite smelter at Thoothukudi bypass the requirement of public consultation with the people of the project-affected area.

Now, the Madras High Court has stayed the expansion of the Sterlite plant and ordered the company to hold a public consultation. Since then, the Government of Tamil Nadu has issued an Order for the sealing and closure of the Sterlite plant. While this comes as a huge victory for the people’s movement, it is a shame that the Government needed the deaths of 13 people in order to act. The Government Order is based on orders by the Tamil Nadu Pollution Control Board refusing to renew Sterlite’s license and ordering closure of electricity supply. Activists have pointed out that the TNPCB orders are drafted in an extremely weak manner, failing to cite the illegalities committed by the Sterlite plant, and thereby setting up the scene for a successful legal appeal by Sterlite challenging the closure.

The Thoothukudi massacre shows how little has changed since the Bhopal Gas Tragedy. In fact, the corporations have grown even more brazen: emboldened by the fact that their funds are able to buy Governments and ruling parties. Corporate crimes are enabled, covered-up, and go unpunished – while people protesting to save their lives and health are shot dead.

Justice for Thoothukudi must mean that not only is the Sterlite plant shut down; the TNPCB officials and Sterlite management responsible for illegalities and violations must be prosecuted and punished. Sterlite must pay suitable reparations to the project-affected people. And the Chief Minister of Tamil Nadu and the Prime Minister of the country should lose their jobs for killing citizens and protecting a criminal MNC that is playing with people’s lives. To remember Thoothukudi’s courageous struggle, India’s people must pledge to resist, defeat, and oust the Company Raj nexus of corporations, Governments, and parties - that sheds people’s blood to feed corporate greed.