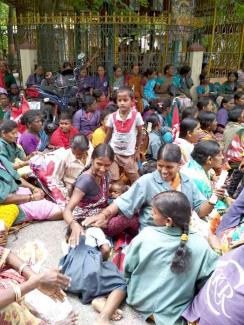 Thousands of contract Sanitation workers of Bangalore Municipal Corporation led by the AICCTU-affiliated BBMP Guttike Powrakarmika Sanghatane and CPIML (Liberation) laid siege to the Corporation office on 05 May 2018 demanding unpaid wages for last 5 months and more and against the threat of retrenchment.

On World Environment day, even as several official events marking the occasion were underway, more than a 2000 workers whose sweat and toil keeps Bengaluru’s environment safe and clean, struck work and gathered at the BBMP office, along with their children, blankets and mats, protesting against the BBMP’s anti-worker attitude and illegal actions. The anti-worker attitude of the BBMP is clear from the way the BBMP Commissioner has told the media that the protestors are bogus workers. The falsity of the Commissioner’s statement is evidenced from the Mayor's own statement who admitted that 4000 workers had not been paid and that such payment would be issued.

One powrakarmika said, “The Commissioner who did not have the courtesy to even come talk to us, calls us bogus! This is highly condemnable. We challenge him to pick up a broom and sweep the street for one day and collect garbage, and segregate it by hand like us, to know our life.”

Another added, “Any delay of payment of minimum wages is against the law, but here the BBMP did not pay wages of workers for months! We had protested against the same even in May and were assured action in three days but there was no move by the Palike to pay the wages.”

A third pointed out, “The Palike does not pay us even for our brooms and uniforms, leave alone providing gloves and safety equipment. And when they don’t pay our wages, we can’t even manage to pay for food, rent, school fees and other necessities!”

Additionally, the Palike which itself hired additional workers to manage Bangalore's growing waste problem, decided to terminate their services going by a flawed and unscientific stipulation that there should be one worker per 700 population. Not only would this mean a loss of jobs for a few thousand workers but also would have increased the load of the already overworked remaining workers. The protest today was also to demand no workers be terminated.

Workers from areas like Kengeri, Yeshwantpur, Herohalli, Peenya, Ulsoor, Banaswadi, Indiranagar, KR Puram and several other areas gathered by 11 am at the BBMP to be part of the protest. The mayor came and addressed the workers as also the Joint Commissioner, (Health and SWM).

The Strike was eventually called off after the JC (SWM and Health) issued a circular assuring disbursement of pending salaries within 3 days, no retrenchment of any worker, weekly and festival holidays, uniforms and safety equipment to be provided within a week, ESI and PF cards to be issued, a grievance redressal cell constituted comprising the Chief Engineer, SWM and Assistant Commissioner (SWM) to look into all complaints of harassment and threats that the workers face.

The workers declared that if the assurances made in the circular are not met, they would strike again. They also demanded that the contract workers be regularized as was promised by the previous government and recommended by several official committees.

The union called upon all Bangloreans to put pressure on their corporators and BBMP officials to see that the workers are given their due and the law is followed as far as their wages, facilities and leave is followed.