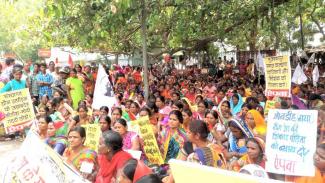 On June 22, AIPWA held a massive rally in Patna at the CM’s office where thousands of women from across the state protested against the sexual-exploitation rackets in a government-run shelter for young girls in Muzaffarpur; horrific rapes and circulation/sale of rape videos; the gang-rape of the wife and daughter of a Doctor in Gaya, and growing attacks on women in the public sphere including educational institutions and workplaces. When no one from the CM’s office even agreed to accepting a memorandum, AIPWA announced that they would burn effigies of the CM in every village between 30 June and 2 July.