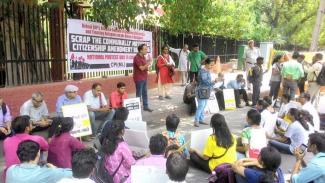 A protest march and demonstration was held at Parliament Street in Delhi where activists demanded the scrapping of the Bill that sought to undermine the secular basis for Indian citizenship and communal bias towards both citizens and refugees.

Protests were also held at Palani in Dindigul district, Tamilnadu, Gunupur in Rayagada district, as well as Bhubaneshwar in Odisha, Guwahati and other places in Assam, Venukonda, Mangalagiri, Tenali, and Duggirala in Guntur district of Andhra Pradesh, and Ranchi in Jharkhand.

On the same day, protests against the Bill were held in Guwahati, Dibrugarh and other places in Assam, as well as Diphu in Karbi Anglong.