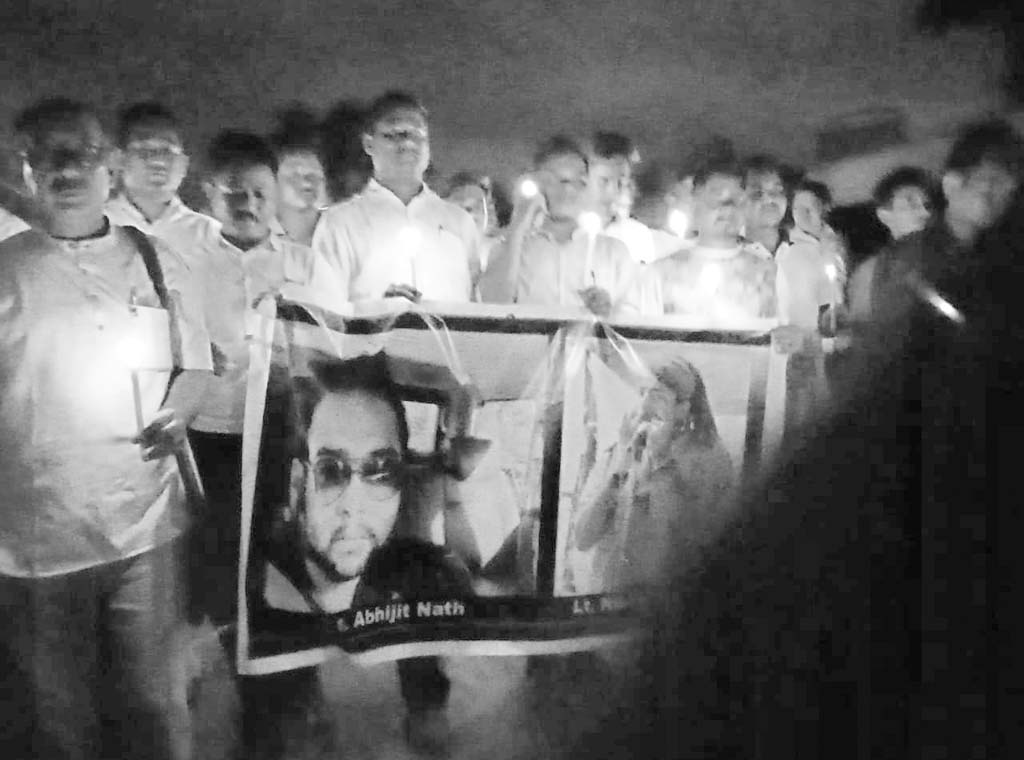 On 8th June Abhijeet and Neelotpal, two young musicians from Guwahati went roaming into the hills of Karbi Anglong and Dima Hasao to enjoy music and nature. Their car was loaded with some local musical instruments. They were supposed to go to Dima Hasao, but changed their minds and ended up at Panjuri village of Dokmoka area in Karbi Anglong. It was dusk and they started to make their way towards the beautiful waterfalls nearby. Very near the falls, some 200/250 villagers surrounded them and lynched them to death, suspecting them of being ‘child snatchers.’ This lynching was the latest in a long line of similar incidents in Jharkhand, Tamil Nadu, Karnataka, and Telangana triggered by rumours spread on social media about ‘child snatchers’.

In protest against the lynching and demanding justice for the victims, Karbi Students Association, KNCA, AASU, AIPWA and other organisations held a candlelight march in Diphu, marching from Diphu Club to Semsonsing Engti Park. Similar demonstrations were held by citizen’s groups and people’s movements all over Assam.

Protesters pointed out the culpability of the police in the incident – the police did not rescue the two men even though the police station was a mere 4 kilometres from the lynching spot. Intellectuals and various organizations demanded a credible probe into the incident and into the forces that are spreading rumours about child-snatchers.

Protesters also pointed out that the ruling BJP in the Centre as well as Assam is promoting a culture of superstitions, intolerance, suspicion, xenophobia and lynch mob mentality which is endangering all citizens. They pointed out that if the BJP and RSS encourage lynching of minorities and Dalits and moral policing of women, such a fire cannot remain confined to one’s neighbours’ home – it will set the whole of society on fire.

The CPI(ML) also joined other organizations in warning against attempts by the BJP and RSS to use the incident to pit Assamese people against Karbi and Bodo communities, and divide the united movement in Assam against the Citizenship Amendment Bill (2016).

The widespread rumours on social media about "Xupadhora" (child traffickers in Assamese) in the state is what led to the lynching in Dokmoka. Earlier, one man was also beaten up in Sonitpur district of Assam, mistaken for "Xupadhora". The deeply ingrained idea of “Xupodhora” in Assamese society is not entirely new: most children in the state would remember being disciplined with warnings about the bogeyman “Xupadhora” taking them away if they misbehaved. The impact of a specific rumour warning about “Xupadhora” can be imagined in a very remote village like Panjuri, especially given the fact that child trafficking is very much a reality in Assam and Karbi Anglong. Even a local newspaper seldom reaches this village. But mobile phones with Whatsapp and Facebook are in the hands of most of the young boys. The rumour of Xupadhora that was made viral throughout the state was enough to create panic. When Abhijeet and Neelotpal reached Panjuri, some boys right after seeing them informed others that two child traffickers have entered the village in a black Scorpio vehicle, just as the rumours had warned. The news spread within minutes, and the highly excited mob lynched the two innocent young men.

Immediately after this incident, there was an attempts to spread the most dangerous and divisive idea that the tribals are violent and uncivilised and so lynched two Assamese men. Social media was flooded with inflammatory statements on these lines. Assam would have burnt with clashes between tribals and non-tribals at a crucial time when people across the state are agitating against the Citizenship Amendment Bill and when the NRC final draft is due soon. A pertinent question arises here. Who would have been benefited had there been such clashes? Obviously those who are in favour of the Citizenship Bill. Can we ignore the possibility that social media rumour-mongering and instigation is the work of those communal forces who support the Citizenship Bill in Assam, and are notorious for spreading fke news and hate on social media all over India?

In this volatile backdrop, a cultural protest day was observed at Lakhiehar Bora Khetro in Guwahati to spread the message of peace, unity and harmony against the lynchings. This was felt to be especially appropriate given that the victims were gifted musicians.

Many prominent and respected artists and singers organised the cultural programme with the aim of spreading the message for Integrity, peace and harmony and against superstitions. Eminent singer of Assam and activist of the Sadau Asom Jan Sanskritik Parishad, Loknath Goswami, anchored the programme. He also sang his most adored song in Assamese "Mukutir Bordhol, piritir sifung" along with many others, with the message of integrity and peace among different tribes and non tribal people. Manisha Hazarika also took part in the programme and appealed to the people to maintain integrity. J.P Das, Kula Baruah, Samar Hazarika were the eminent artists that presented their much-adored songs. As the singers sang, painters, inspired by the music and the message, painted. Robiram Brahma, the noted painter of Assam inaugurated the painting exhibition with strokes from his brush. Champak Borbora, Jnanen Borkakoty, Nituparna Rajbangshi were among the prominent painters, artists and cartoonists that gave the message of united fight against superstitious believes and divisive politics.

The programme witnessed a good gathering in Guwahati in June when it is often lashed by rain. The people present in the programme also resolved to work for a sustained cultural movement in Assam against superstitions and for peace and unity.