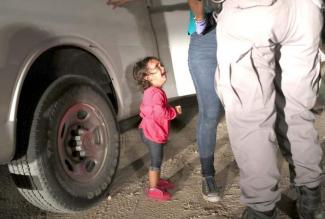 The Trump Administration’s policy of criminalising immigrants and asylum seekers, especially those from Latin American countries, is facing massive protests.

Trump’s racism towards immigrants is nothing new: in his election campaign he had demanded a border wall with Mexico and branded Mexican immigrants ‘rapists.’ Quite recently, he dehumanised immigrants and asylum seekers trying to cross the borders into the USA, saying “You wouldn’t believe how bad these people are. These aren’t people, these are animals, and we’re taking them out of the country at a level and at a rate that’s never happened before.” In a recent tweet he claimed that immigrants “infest” the US. The use of such language – ‘animals’, ‘infest’, ‘rapists’ – is very much reminiscent of Nazi Germany where dehumanisation paved the way for the genocide of Jews.

Escalating his anti-immigrant policy, the Trump Government began separating thousands of immigrant children from their parents. While the parents are jailed, the children are being held in cages and ‘tender-age shelters’ that opponents are calling ‘baby jails’, far away from their parents. The policy led to an eruption of protests. A news portal ProPublica made publicly secretly recorded audio from one of the “baby jails”, with heart-rending sobs of small children crying for their parents.

The American Paediatrics Association issued a statement warning that such traumatic separation of children from parents would result in lasting damage to the children. Three airlines - American, United, and Frontier – refused to allow their planes to be used to transport children away from parents.

A photograph by John Moore (see back cover) of a small Honduran two-year-old girl at the border sobbing as police search her mother, shook the conscience of many. Activists of Democratic Socialists of America, a Left organisation, held a direct action protest, heckling Homeland Security Secretary Kirstjen Nielsen as she dined at a Mexican restaurant with her aides. They disrupted Nielsen’s dinner, chanting slogans outside the restaurant, including ““Kirstjen Nielsen, you’re a villain, locking up immigrant children.” The DSA has promised more direct actions of this kind.

In Portland, activists of a group called #OccupyICEPDX occupied the office of the local US Immigration and Customs Enforcement (ICE). Protesters held signs including such as "Everyone is Welcome Here", "Stop Child Abuse - Abolish Ice" and "Close the Trump Concentration Camps".

Trump was widely held to be holding the children hostage to force the Democrats to vote to fund the wall with Mexico. He insisted that he had no power to change the policy, claiming it was a “law” passed by the earlier Government. Under pressure from the protests and condemnation however, Trump was forced to back down and sign an executive order doing away with the family separation policy. However, this has not led to cooling off of the protests since it only means that families will be jailed together. Also, it is clear that the Government has no intention or plan to reunite the already separated families any time soon, if ever.

Protesters are therefore demanding an end to the policy of criminalising and arresting immigrants and asylum-seeker, and abolition of the ICE itself – a notorious institution accused of many human rights abuses including a recent incident where it shot dead an 18-year-old girl from Guatemala who was seeking to cross the border into the US.

It must also be recalled that if the countries the asylum-seekers and immigrants are fleeing are a mess, it is in very large part because of a long US history of plunder and destruction of their economic and democratic fabric. It was to remind Americans of what they owe Latin America that the late Hugo Chavez gifted former US President Obama a copy of the late Eduardo Galeano’s Open Veins of Latin America. It is the USA that cut open those veins – and if people from those countries today flee gang violence and other forms of oppression and danger to seek a better life in the US, they have every right to do so.