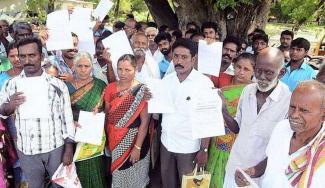 The police harassed the fact-finding team quite a bit, following them about, and eventually ensuring through their pressure that no one was willing to provide a venue to the team for a press conference.

Another team comprising Comrade Balasundaram, Central Committee member of CPI(ML) and Vice President of AIARLA, as well as Comrades Arif, Asghar Ali, Rahamathulla, Cheyyadu Muhamad, and Venkatesan were arrested by the Tamil Nadu police while they were part of a fact-finding team to Tiruvannamalai, another district affected by the same project. As we go to press, these six comrades are still detained in Cheyyar Police Station.

The police harassment and arrests underline the all-out attack on democracy that Tamil Nadu is experiencing today.

On June 20th 2018, the public consultation to listen the farmers’ views on the proposed greenway corridor road at Thiruvannamali town in a marriage hall was stopped by police. The district president and the secretary of the Vivasayigal Sanagam were arrested and then those farmers who came from Kalasappakkam near Polur and those farmers who came from Kancheepuram including the van driver were arrested. 25 farmers who came to express their opinion were arrested. The public consultation was conducted in the Vivasayigal Sangam office in Thiruvannamalai. After the meeting was over all those who assembled marched to the Superintendent of Police office demanding release of all the farmers arrested. Then only they were released.

Farmers from many villages of the district decided to have a public consultation to elicit farmers’ views after they came to know through newspaper advertisements notifying that their lands would be surveyed. They organized a hall meeting on 24th June 2018, to record their dissent views. They have also acquired formal permission from police to conduct the meeting. While more than 800 farmers assembled to voice their concerns, suddenly the police cancelled the permission to conduct the meeting. After much argument the meeting was conducted, but the police put a condition that no outsider should address the meeting other than those farmers whose lands are proposed to be acquired by the government.

People said that they were informed by the Revenue and Police to give their petitions directly to the district collector between 4th and 8th June 2018. Based on this on 4th June 2018, people hired different vehicles to go to the collector’s office to give their petitions. However, a big police force stopped them on their way. They also threatened the drivers of the vehicle and send them away. Many farmers and their families including old people and children walked for about 6 kms to reach the Collector’s office. After waiting for the whole day, the people were told by the Revenue department, that the government cannot accept a common petition from all and instead the people should submit individual petitions. They insisted that people should come back on 6th of June 2018 and sent them back without accepting their petition. On 6th June, 2018, after a long wait the people were told that the District Collector was not available and they were asked to come back on 7th June 2018. When the farmers met the Collector on 7th June they were promised that the he would visit the villages on 8th June, 2018.

After visiting a few villages and farmers, the District Collector categorically told the farmers that she would try to recommend for maximum compensation for the farmers, but that there was no chance that the project would be dropped. She then returned. Later when the revenue officials came to the villages to survey the land without any prior notice or prior permission from the farmers, people questioned them about how they can enter their fields with boots. The officials responded saying that all the land belongs to government and they don’t need any permission to enter the lands and no one can prevent them from doing so. They continued measuring the land and placing boundary stones.

People were also threatened by the officials that if someone remove the boundary stones or put black flags in their fields, they would be arrested under NSA and Goondas Act. The police and intelligence visit the village almost every day and meet farmers individually in order to create fear in their minds.

A 66 year-old woman Unnamalai told us that, “I lost my husband 22 years back and single-handedly saved and developed this property. I am struggling to provide for 8 grand children who have attained marriageable age. My land is so fertile, I cultivate various crops with three bore wells and an open well. But the government classified this land as land fit for cultivating horse gram only! I was arrested and my land was surveyed. Land adjacent to my land is owned by an individual who is politically influential and his land has not been surveyed. Moreover, nearby private factories, college and quarries are bypassed and the road is proposed to be laid in a zig-zag way avoiding the lands of influential people. A bypass road is meant to be straight and should not have so many twists and turns.” Various other farmers narrated their tearful stories to the fact finding team.

The PA to Tahsildar told us that “the district administration is keen to provide maximum compensation, job opportunities and linking the affected farmers with various other government schemes. We are advised to handle the people in a polite way. Compensation would be at least three times of the market value. We have issued land pattas for three beneficiaries in Aachankottapatti yesterday as an alternative.” He also referred us to the Project director of NHAI who told us that “the project is in the preliminary stage and we have estimated the cost to be Rs. 8500 crores tentatively. We are still looking at the viability of the project, land acquisition cost, civil cost and so on.” When asked why, then, are lands being surveyed and marked without having first established feasibility of the project, he responded that they need to keep the land ready before the tender is called for. This is done based on previous experience. Once we mark the project alignment, we will hand over the details to the DRO for further acquisition.”

Thus while acquisition of land has not started, an impression of acquisition being underway is created by the DRO officials. The team feels that it is the responsibility of the administrative organs of the government to clearly inform the people above various stages of the project.

Observations of the Fact Finding Team

According to Government statistics, only 6400 trees are to be cut for laying the road. But many farmers organizations, forcefully state, with evidence, that several lakhs of trees would be cut.

As per the 2015 Amendment by Tamil Nadu to the The Right to Fair Compensation and Transparency in Land Acquisition, Rehabilitation and Resettlement Act, 2013, under the section on food security, it is stated that it is the responsibility of the government to provide an equal amount of alternative land and funds for the land acquired for any project. It is also stated the acquisition of agricultural land should be of minimum proportion. People say that in the acquisition proposal for the current project, most of the irrigated cultivable lands are falsely classified as dry land instead of wet land.

People are lamenting that while surveying the land for acquisition, politically influential persons, rich people and land belonging to big organizations are left out and the focus is more only on poor and helpless farmers. People also say that the officials are repeatedly discriminating against poorer sections and favouring rich people while acquiring land.

People are not willing to believe the compensation packages offered by the government based on the earlier experiences. They say that the compensation is not paid fairly even after acquiring lands for the Four-way Road, Salem Steel Plant, Neyveli Thermal power corporation and so on.

Recommendations of the fact finding team: