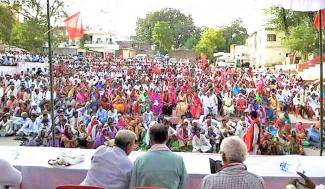 The CPI(ML) organized a ‘Jawab Do’ (We Demand Answers)rally in Varanasi on 20 June to demand answers from the Modi and Yogi governments on various people’s issues. The BJP-Modi government at the Centre which came to power on the promise of ‘Achhe Din’ is celebrating completion of 4 years in power but the country is in dire straits: attacks on farmers, workers, students, youth, and women have increased; incidents of rape, farmers’ suicides, are on the increase; instead of jobs being created, unemployment is at a dismal low. The Modi and Yogi governments must answer the people for this all-round failure.

Speaking at the Poorvanchal-level rally in Varanasi, Politburo member Ramji Rai said that the Modi government has completed 4 years in power and the Yogi government, 1 year. They have failed dismally on all fronts.

As the 2019 elections approach, the BJP’s true face is getting more and more exposed. They are concentrating of the politics of communalism and polarization. On June 18, a Muslim man Qasim was lynched to death in Hapur, UP, by a bloodthirsty communal mob that also attacked the man who tried to rescue Qasim. The mob – comprising mostly teenagers and minors – continued to abuse Qasim as he died begging for water. The whole world saw with shock the images of UP policemen in uniform casually leading the mob that is dragging the body of Qasim behind it. UP’s children and youth, denied jobs, are being turned into fodder for murderous communal mobs by the Modi-Yogi Governments.

The Citizenship Amendment Bill negates the very basis of our Constitution and the people of India will not tolerate it. Feudal-communal forces are being encouraged and protected. Comrade Ramji Rai said that the NSA is a draconian law under which false arrests are being made, and must be revoked. After making Kashmir a veritable hell, the BJP has pulled out of the alliance with PDP in order to wreak further repression and reap electoral benefits in 2019. The situation in Uttar Pradesh is also dismal, with the oppression and killing of dalits and the poor reeling under moneylenders’ debts. We demand a special package for Poorvanchal for its industrial development; we demand answers for the high unemployment rate and the CPI(ML) will carry out Block level campaigns on the issues of education, employment, and housing.

The rally was also addressed by CC members Ishwari Prasad Kushwaha and Mohd. Salim, State Secretary Sudhakar Yadav and other leaders. They pointed out that Chandauli and Banaras have become major areas of land acquisition and land is being forcibly snatched from farmers for the railways and GAIL gas pipe lines without regard to any laws. Farmers have been agitating for long in a democratic way but if the government still ignores their plight their fight will take a decisive turn. The poor are not getting the food grains due to them under the Food Security Act; instead, crores are being looted from the scheme. The BJP and Modi-Yogi governments have not fulfilled even one of their poll promises.

Party activists and a large number of people from Mirzapur, Ballia, Ghazipur, Chandauli, Sonbhadra, Bhadohi, and Banaras participated in the rally.